'It feels like Freedom Day': Soweto resident after buying booze 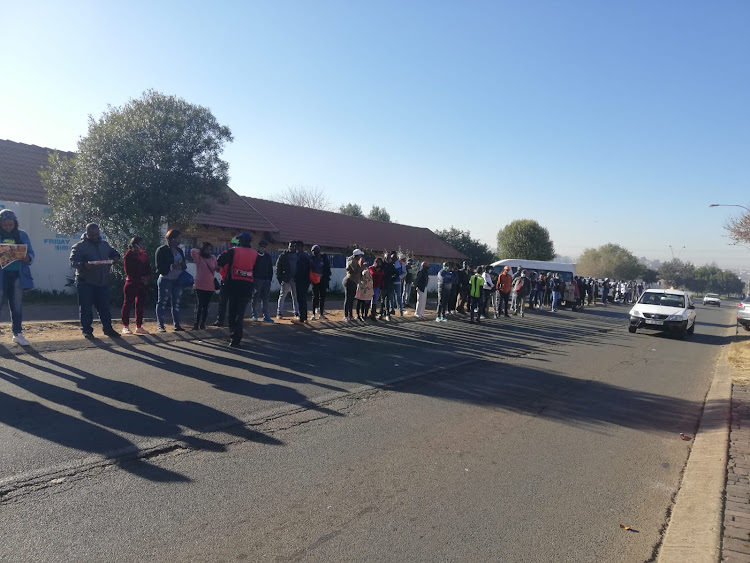 The first day of the level 3 lockdown regulations, which permit the sale of alcohol, was met with excitement and jubilation in Thokoza Park, Soweto on Monday.
Image: Nonkululeko Njilo

There was jubilation as customers queued to buy alcohol on day one of lockdown level 3 in Thokoza Park, Soweto, on Monday.

Hundreds of people headed to Supa store, forming long queues after having gone nearly two months without legally being able to purchase liquor.

Some shoppers maintained social distancing, others conversed and clapped hands.

Bandile Khoza was among the first customers to a pack of ciders and vodka. He said he had queued since 5am.

Customers had their temperatures taken and hands sanitised at the entrance to the shop.

Hundreds of people are gathered outside Supa store in Thokozoza Park, Soweto. Many say they are here to purchase alcohol, saying the ban was unnecessary to begin.
@TimesLIVE pic.twitter.com/PQJsjoV2kA

“I am really happy. I will sleep better tonight,” said Khoza. “Life is difficult, we all need something to help us deal with it. For me, it’s alcohol. Plus it makes me happy.”

An elderly woman, identified only as Elizabeth, said the ban on alcohol had been unnecessary.

“We are adults, we know what is right and wrong. They should just let people drink if they want, and there is no proof that banning alcohol will protect us from the virus,” she said.

Elizabeth bought a crate of beers and ciders. She joined the queue after 6am and was able to make her purchase just after 9.30am.

“I woke up early because I was worried that the government would change its mind, like it did with cigarettes. It feels good to do what we want. It feels like Freedom Day,” she said.

A friend echoed her sentiments. “This thing [ban on alcohol] was getting out of hand. People were doing wrong things because of being thirsty. I am really excited. I can say God is alive.”

While the sale of alcohol is permitted, regulations state it can only be consumed at home. But some customers could not wait and opened their drinks immediately after leaving the store. Crowds sang and cheered as they did so.

Manager Tau Chikonye said large numbers of people were expected as the supermarket was known to sell at affordable prices.

“We did expect to have quite a lot of people. In terms of stock we have more than enough.”

The store, like many other alcohol outlets in the country, was hit hard by the lockdown. Chikonye said they were pleased to resume operations, even though Covid-19 infections were on the rise.

“We are quite happy that sales of liquor have been reopened, but I do feel South Africans need to approach this with caution because it is a very sensitive time in terms of Covid-19 infections and deaths,” said Chikonye.

Another customer, who asked not to be identified, purchased alcohol in several boxes. She said she planned to sell it to those who were unable to buy for themselves.

“I don’t drink at all, but people love booze, so I will sell to them, especially those who can’t queue because they are working ... some people will buy and run out. So I will be selling to them to try to make some extra money,” she added.

Liquor suppliers and outlets are gearing up for the great booze rush when they throw open their doors for business tomorrow. But they may not have ...
News
2 years ago

POLL | Will you buy alcohol under lockdown level 3?

Liquor shops will sell alcohol only from Monday to Thursday between 9am and 5pm.
News
2 years ago

Alcohol available Monday to Thursday, from 9am to 5pm

South Africans wanting to buy alcohol can do so between 9am and 5pm, Monday to Thursday.
News
2 years ago