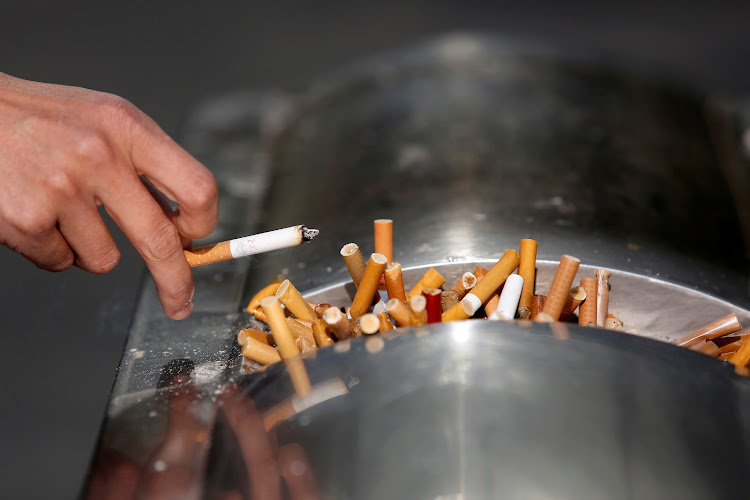 The Fair Trade Independent Tobacco Association (Fita) has taken the government to court over the ongoing ban on the sale of tobacco products during the lockdown.
Image: REUTERS/Aly Song/File Photo

The government's claim that banning cigarette sales would make people give up smoking is "untenable and not supported by evidence".

This is according to court papers filed by the Fair Trade Independent Tobacco Association (Fita), in response to a affidavit by Cogta minister Nkosazana Dlamini-Zuma last week on reasons why the government took the decision to ban the sale of cigarettes.

Fita is currently embroiled in a high court case against the government over the controversial ban, which was instituted under the initial coronavirus lockdown and was reaffirmed under level 3, even while the ban on the sale of alcohol was lifted.

The association wants the court to set aside the ban.

In a supplementary affidavit filed on Friday, but made available to TimesLIVE on Wedensday, Fita chairperson Sinenhlanhla Mnguni said the reasons for the decision revealed a focus on the health hazards associated with the use of tobacco products.

He said there was "no rational basis" to the ban.

"This is a misguided enquiry and these hazards cannot justify the outright prohibition against the sale of the products," said Mnguni.

He said there was also no rationality in the contention that the ban would force people to stop smoking and drive illicit traders out of business, as claimed in Dlamini-Zuma's affidavit.

"The approach taken in relation to the prohibition in question is nothing less than remarkable, and apart from there being no rational basis for the prohibition - there simply being no evidence justifying it - there has been no consideration given to proportionality," said Mnguni.

"The prohibition is also out of step with the vast majority of countries throughout the world.

"There is also not any rational consideration given to the enormous harm that has been and continues to be occasioned to not only the economy, employment, livelihoods, but also to the health and safety of individuals.

"It is undeniable that simply and summarily preventing smokers and users of tobacco products from using these products gives rise to very serious physical and emotional adverse consequences. This leads to many users resorting to illicit non-regulated products that pose a significant health hazard."

He added that Dlamini-Zuma's in relation to these issues was high-handed and amounted to executive overreach.

"The tobacco ban is an anomaly within the context of the regulations considered as a whole, which have gradually been relaxed."

He said regulations were supposed to curb the spread and effect of Covid-19, but this was out of step with other regulations - including the government now allowing the sale of alcohol and allowing for religious gatherings of up to 50 people.

Mnguni said the cigarette ban has resulted in a public outcry. He said a petition to "uplift the tobacco ban" has now received formal written support from more than 600,000 people.

WATCH | The 'tobacco tango' — inside the illicit cigarette trade

n a dingy convenience store in the Cape Town city centre, a man sitting in the dark behind an unlit counter offers a pack of Mega Blue cigarettes for ...
News
2 years ago

"It bears mention that a similar opposing petition was created by Ekurhuleni mayor Mzwandile Masina entitled 'Support the national command council on Covid-19 decision to ban the sale of cigarettes' has by comparison received only 30,343 signatures."

Mnguni said it was clear from reasons provided by the government that it failed to have due and proper regard to the voices of concerned citizens who did not approve of the ban.

He said the government's decision to prohibit the sale of cigarettes and tobacco products has arbitrarily infringed on the rights of citizens, those of the industry and many entities and persons whose welfare and livelihoods were negatively impacted upon by the irrational ban.

Mnguni said members of Fita had to suspend their trade for what was initially thought to be 21 days but has now been extended indefinitely.

"The right to trade has been limited for the majority of persons in SA due to the lockdown. However, cigarette manufactures like Fita members and the entire tobacco value chain have had their rights arbitrarily limited more so than others," he said.

The court papers also cite various stakeholders who had spoken out against the cigarette ban, citing the economic consequences and the promotion of the illicit trade of tobacco products.

He said among those was Dr Glenda Gray, of the SA Medical Research Council (SAMRC) and government's own of the ministerial advisory council, who told Radio 702 that "prohibiting cigarettes will not stop people from smoking - it means people will go out and find it somewhere else".

Mnguni said Dlamini-Zuma had failed to consider - and had not made reference to - any information that did not support the banning of cigarettes and tobacco products. He said these included:

Meanwhile, Fita was also concerned that the government was supposed to file their answering affidavit to the legal challenge on Wednesday. The date is part of the timetable that was made an order of the court on May 12 to govern how the parties will file court papers, culminating in the matter being heard on June 9.

This did not happen, however. On Tuesday, the state attorney wrote a letter to Gauteng judge president Dunstan Mlambo asking that the hearing be rescheduled to the week beginning on June 22.

Fita is opposed this request.

On Wednesday, Mnguni said it was beyond comprehension that President Cyril Ramaphosa and Dlamini-Zuma, despite the significant time periods afforded to them, have failed to serve their answering affidavit in this matter timeously.

Legal challenges against the government are mounting.
News
2 years ago

There is no evidence that smoking would increase the transmission of the coronavirus, a cardiologist and antismoking researcher said on Thursday
News
2 years ago