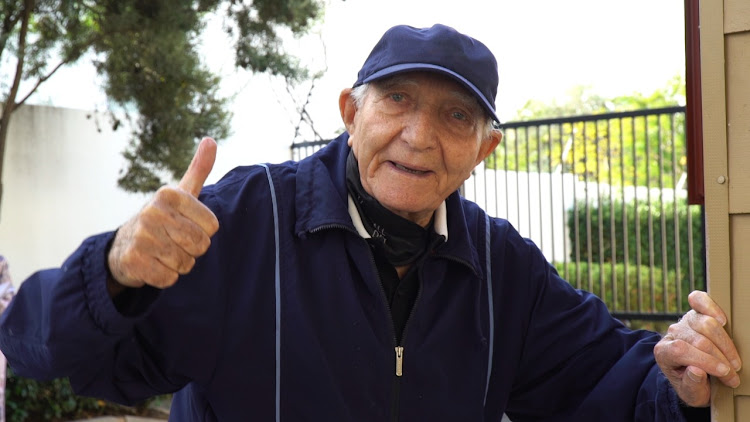 Solly Krok raised more than R2m for those who've been affected by Covid-19 by completing a 91km walk on Thursday.
Image: Supplied

Business veteran Solly Krok, has raised more than R2m for those who've been affected by Covid-19 by completing a 91km walk on Thursday.

TimesLIVE caught up with the 91-year-old minutes after his last lap in his Johannesburg suburb, and he said he couldn't be happier with the outcome.

Krok started the walk on May 28, his birthday. He was inspired to do the walk by British war veteran Tom Moore, who raised more than £4.8m (about R81m).

His goal was to raise R108m to help support poor communities during these unprecedented times.

“What breaks my heart is that the poor were poor before Covid-19 and will remain poor after Covid-19,” said Krok told TimesLIVE. “I am determined to make a difference by raising funds from international and local organisations to help those who need it.”

Some of the funds will go into food parcels and support children and the elderly, said Krok.

Under his venture called Keep the Wolf from the Door, Krok partnered organisations Afrika Tikkun and Siyakhana to address poverty and hunger.

He said the race was far from over and encouraged others to join him to help meet his goal.

“Maybe next week I'll go for another walk again and would like to nominate those younger than me to also join me and raise awareness and funds too,” he said.

Those who wish to contribute can do so by sending their donations to Afrika Tikkun NPC using the FNB account number 62196064100 and “keep the wolf from the door” as a reference.

Uyinene Foundation steps in to help GBV victims during lockdown

The offer comes in the birth month of Mrewtyana, who was raped and bludgeoned to death on August 8 2019 at the Clareinch post office in Cape Town.
News
1 year ago

He has clawed his index finger to a raw and bloody mess, contemplated suicide and broken down at the airport, but thanks to his fellow South Africans ...
News
1 year ago