Public protector Busisiwe Mkhwebane said she was not wrong in ordering the police to give protection to corruption whistle-blowers.
Image: Esa Alexander

Public protector Busisiwe Mkhwebane on Thursday suggested that she and police minister Bheki Cele had resolved the issue about him not giving protection to whistle-blowers outside court.

This despite the high court on Wednesday setting aside her scathing August 2018 report against Cele in which she had lambasted him, saying there was “undue delay, improper conduct, gross negligence and maladministration”  by Cele and the police ministry in providing protection to Thabiso Zulu and Lesley Stuta, who were witnesses in her investigation into alleged multimillion-rand corruption in the uMzimkhulu local municipality. 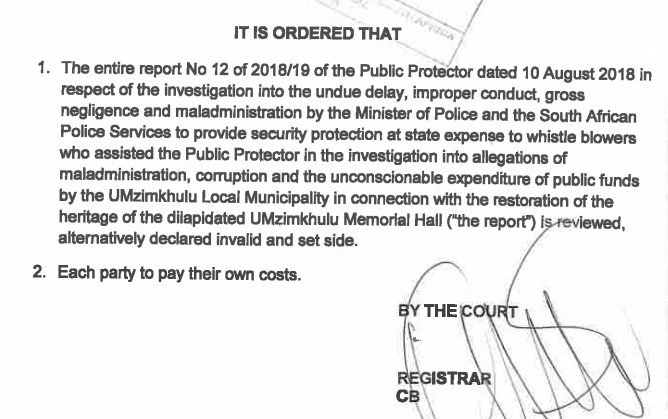 The ruling delivered by the high court in Pretoria on Wednesday.
Image: Department of Justice

“Public protector Adv Busisiwe Mkhwebane and minister of police Bheki Cele on Wednesday, June 3 2020, obtained an order by consent in the Gauteng division of the high court in Pretoria in respect of a matter concerning minister Cele’s challenge of adverse findings and remedial action made and taken against him by Adv Mkhwebane,” Mkhwebane's office said in statement.

Wednesday’s court ruling, which invalidated Mkhwebane's report, came after another ruling delivered in the same court in March that ordered the department of justice to be the one to offer Zulu witness protection, and not the police as suggested by Mkhwebane’s report.

After taking it under review, the high court in Pretoria has overturned and set aside a report by Public Protector Busisiwe Mkhwebane, which stated ...
News
1 year ago

On this matter, Mkhwebane stressed however that she was not in the wrong and neither did the court find her to be.

“It is important to stress the point that the court, in both the separate cases brought by the minister and Mr Zulu, did not traverse the merits of the public protector’s case. Accordingly, the public protector still holds the strong view that the constitutional duty to provide safety and security to citizens rests with the SAPS,” her office said.

Mkhwebane, however, did not take kindly to Cele’s statement issued earlier in which he said he had been “vindicated by the court”.

“It has always been clear that while protection of witnesses is paramount, it remains the sole responsibility of the National Prosecution Authority as stated in the Witness Protection Act. The public protector should have known this,” Cele said.

Mkhwebane said the “snide remarks” were uncalled for and reminded Cele of a Constitutional Court ruling that stated that an attack on the public protector’s office would undermine the constitutional project of the republic.

Of the two witnesses, Zulu was the one who had taken the matter of protection to court and on Thursday, the justice ministry said it could not provide him with protection.

“The March 26 order in the same division ordered that the Mr Zulu must [be] afforded temporary witness protection in section 8 while awaiting an application for protection from Mr Zulu,” justice ministry spokesperson Chrispin Phiri said on Thursday.

“Zulu [has since] requested to be voluntary discharged as the programme does not provide the kind of service he needs, according to him. With his discharge, he still said he will forward an e-mail in this regard, which to date has not been received yet,” said Phiri.

There was no factual basis for the high court in Pretoria last year to grant a personal costs order against Public Protector Busisiwe Mkhwebane in ...
News
1 year ago

The Constitutional Court on Friday dismissed applications by the public protector and the EFF in their battle against public enterprises minister ...
News
1 year ago