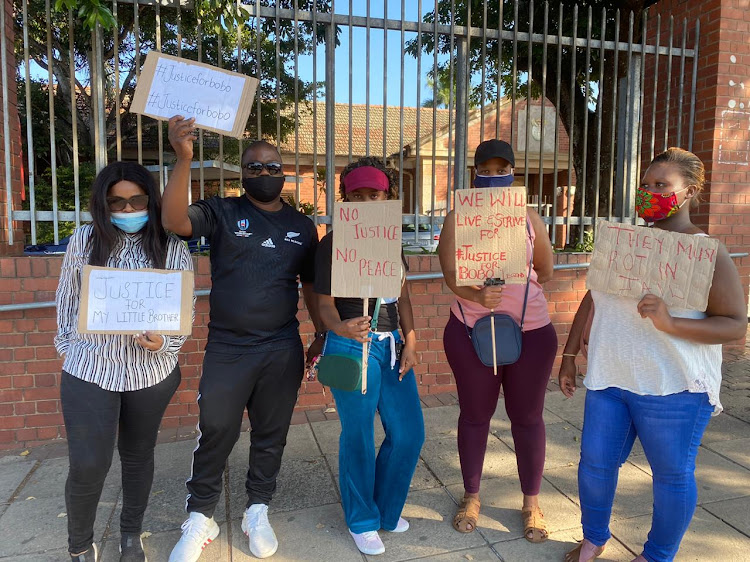 Family and friends of teenager Andile 'Bobo' Mbuthu, whose body was pulled from a river in KZN last month, at the Verulam magistrate's court on Thursday. They asked not to be named.
Image: Deepika Naidoo

Family and friends of murdered teen Andile “Bobo” Mbuthu were left reeling in the Verulam magistrate’s court on Thursday when they heard that his body may have been in the back of a bakkie owned by his cousin while the cousin and several other accused were partying at a birthday braai.

The body of the 16-year-old teen - who was initially reported missing after he was accused of stealing from a tavern and allegedly assaulted last month - was later found in a river near his Hambanathi home in Tongaat, north of Durban.

His cousin Mlungisi Thabethe, 28, who is also the owner of the tavern, was arrested for Mbuthu’s murder, along with Andile Nhleko, 27, Malusi Mthembu, 27, Mncedisi Mzobe, 27, Siyanda Msweli, 26, and Lindani Ndlovu, 22.

One of the accused in Andile Mbuthu murder is his cousin

Prosecutor Krishen Shah put it to Thabethe - who was on the stand - that Mbuthu’s body was lying in the back of his bakkie while he and his co-accused were having a braai to celebrate his birthday. The braai, Shah claimed, followed Mbuthu's allegedly assault at the tavern after he was accused of stealing alcohol.

Thabethe denied this but couldn’t explain how blood matching Mbuthu’s DNA was found in the back of his Toyota Hilux.

The court heard how the accused allegedly put Mbuthu’s body into a bag and tried to dump it into a nearby river, but then had to stuff the bag with bricks because it was floating.

Details of how Mbuthu's decomposing body was pulled from the river proved too much for his family and friends, leading to court being adjourned to allow the family to gather their emotions.

The court also heard evidence from Nhleko, who claimed that he was assaulted by police in custody.

The bail hearing will continue on Friday.

A 16-year-old male has been identified as the seventh suspect in the murder and kidnapping of Tongaat teen Andile “Bobo” Mbuthu.
News
2 years ago

Kwazulu-Natal police have opened an inquest docket after a senior police officer is alleged to have committed suicide on Thursday.
News
2 years ago