'We found his lifeless body on the floor': at the Soweto massacre scene 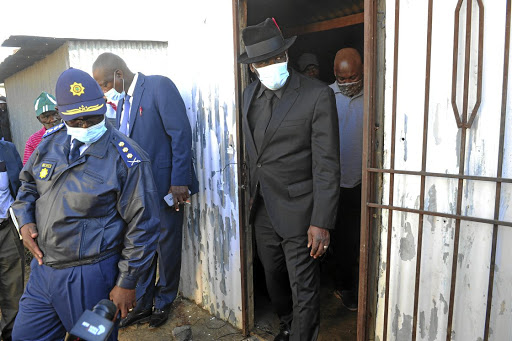 The killing of six men near a hostel in Soweto has left police searching for clues on the motive behind the massacre.

The mysterious gun attack on Sunday night left six men shot dead inside a bullet-riddled shack sandwiched between Jabulani Hostel and other shacks.

One man who survived the shooting is in hospital, reports SowetanLIVE.

More than 30 cartridges were found at the scene where a bloodstained floor bore testimony to the killings. The shooting, which neighbours said took place about 9pm, went undetected by law enforcers, despite increased patrols of police and the army since the lockdown began.

All the deceased, according to police minister Bheki Cele, are from Ladysmith in KwaZulu-Natal and they knew each other.

Five of the men died at the scene, while the sixth died later in hospital. The men were allegedly attacked by three men with rifles and handguns.

Neighbours told Sowetan they were asleep when the shooting started but they heard the gunshots.

A neighbour, who asked not to be named, said the seven men were apparently shoved into the shack before they were gunned down.

“One of the guys who survived told us that they were in Block 22 before they were brought to the shack and shot,” said the neighbour.

He said the assailants were part of a larger group that had camped around the hostel but they did not know what could have been the reason for the killings.

“It was a large group of men. Most of them were on the outskirts of the hostel but only three of them were shot in the shack.

Bangiwe Mthombeni, a sister of one of the deceased, Sphe Mthombeni, 28, said they didn't understand why the group was massacred.

“We got a call at 10pm and they told us to get to the hostel because my brother was shot and killed. We got here and found his lifeless body on the floor inside the shack.”

Mthombeni was living at the hostel.

“I can't describe what I saw. I don't know what happened,” Bangiwe said.

Phindi Mchunu, a cousin of another deceased, Sipho Mvelase, 37, said they were still trying to process what happened.

“We got here and he was lying outside by the door. We don't know why he was killed as well. But he didn't deserve to be killed,” Mchunu said.

A 23-year-old man, Sibusiso Langa, has been charged with the murders of seven KwaZulu-Natal men who were shot in the head while in a house in ...
News
2 years ago

Cele said the number of murder cases being investigated has risen since June 1.

“On Sunday there were 59 people murdered. It's a worrying trend.”

Cele said investigations into the massacre were in the early stages.

“We are still trying to understand what happened, but we will be making arrests.

“There were 10 of them [in the group of men attacked] but three left and went to the shops, while seven of them were shot,” he said.

Police said they could not link the mass murders to the recent ones in KwaZulu-Natal but were looking at all avenues to try to crack the case.

Child, 2, and dad die in apparent hit in Western Cape

Gunmen opened fire on a father and son in Bonteheuwel on Wednesday evening, in what appears to be a targeted hit
News
2 years ago

A police constable was shot dead after a car chase with suspected hijackers in Kwaggafontein, Mpumalanga, at the weekend.
News
2 years ago

Two Durban metro cops gunned down on way to work

Two Durban metro police officers, who were travelling to work together, were gunned down near Hammarsdale on Tuesday morning
News
2 years ago