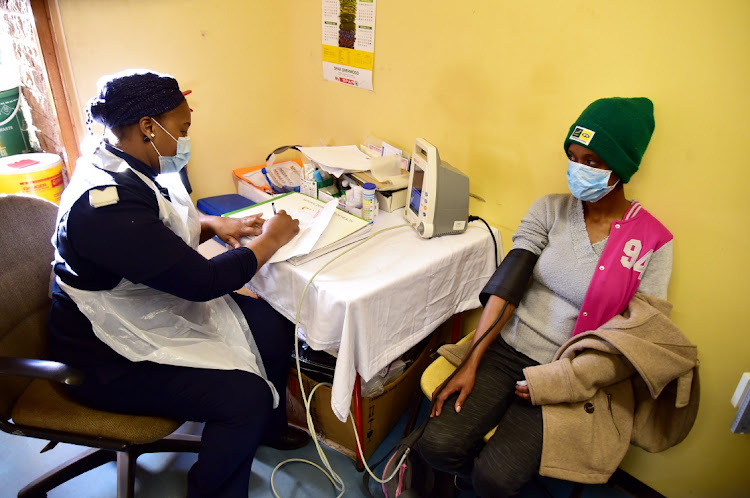 Sister Thelma Sishuba attends to Greshem Lewies, 26, in a corridor used as an observation area at the Malabar Clinic because of a chronic space shortage. The overcrowding was brought to light during an oversight visit led by DA provincial leader Nqaba Bhanga.
Image: EUGENE COETZEE

Nurses at the Malabar Clinic in Port Elizabeth had to deliver premature twins on a consultation bed in the room in which they eat their lunch because of an acute shortage of space at the facility.

Overcrowding at the clinic, caused by a large influx of patients from surrounding communities, has been a problem since the closure of Helenvale Clinic in October 2018.

Nurses from the Helenvale facility were transferred to Malabar Clinic after their clinic was plagued by a spate of robberies and gang activities.

The space problem at Malabar was brought to light on Thursday during an oversight visit by DA provincial leader Nqaba Bhanga, who was accompanied by MPLs Jane Cowley and Retief Odendaal  and Bay councillors Leander Kruger, Davids, Jonathan Lawack and Pieter Hermaans.

Addressing the DA delegation, nurse Saadeeka Sandan said lack of space was a huge problem at the clinic.

“Our kitchen was converted into a consultation room because of the huge numbers coming here. There are people from Helenvale, Korsten and Malabar and we see about 2,500 patients a month.

“Last week, we delivered premature twins in the tiny consultation room where we have an office. It is the same room in which we eat our lunch.

“I don’t think this is any way for us to work, or for patients to be treated. Luckily both the mom and babies were fine,” Sandan said.

“We moved from Helenvale to here because our staff were threatened and intimidated. There was a month in which we had 10 incidents and we could no longer continue working there. It was not conducive,” Sandan said.

'Our workplace is like a jungle,' say staff at Tygerberg Hospital

Healthcare workers at Tygerberg Hospital in Cape Town say they are scared to go to work and feel more vulnerable to contracting the coronavirus at ...
News
2 years ago

Sandan said because of gangsterism, the Helenvale facility’s patients were unable to move around freely and many defaulted on their chronic medication.

The Malabar Clinic has been buckling under the strain ever since. Sandan said during the relocation from Helenvale to Malabar, she lost six professional nurses who were critical to her staff complement.

“In April 2019 we asked for additional space. I waited a year until we received two additional consultation rooms which are on long-term loan,” she said.

“We will have our doctor’s services for one-and-a-half days a week. We have our nutritionist, who comes once a week.”

Sandan said they had asked for space in the Malabar community hall on the same property, but it was locked and the municipality had refused the request.

During the visit, Davids also spoke about how Covid-19 had gripped the Malabar community.

She said residents in six streets had been badly affected by the spread of the coronavirus.

“When the cases are discovered, nurses go door-to-door doing contact tracing and testing people. It’s really bad because we’ve had 12 cases in the ward alone,” she said.

Davids said one woman who was critically ill with Covid-19 in ICU at a hospital in the city was unaware her son had died of the virus.

Cowley said the lack of space at the Malabar Clinic was not conducive to proper health care, especially during a pandemic.

“The poor patients have to wait outside the gate in appalling weather to access the tiny space shared by the councillor. There’s a lot of foot traffic, which increases the chance of transmitting the virus.”

Cowley promised to take up the issue with the Bhisho legislature and department of health.

Municipal spokesperson Mthubanzi Mniki said when it came to making space available —  such as the community hall —  requests had to be dealt with through “intergovernmental relations”.

“The department of health must follow such channels. Then the request will be attended to with the urgency it deserves. As things stand, the municipality has facilities that have been availed to the health department. The Nelson Mandela Bay Stadium is a case in point,” he said.

Mniki said the district department of health had a good relationship with the municipality and worked closely with the mayoral committee member for public health, councillor Yolisa Pali.

Health minister Dr Zweli Mkhize has called on the Eastern Cape to move swiftly to make sure it has all necessary facilities and staff to deal with ...
Politics
2 years ago

The Eastern Cape could see up to 6,000 deaths in the next four months due to Covid-19
News
2 years ago

One of the Eastern Cape’s most important rural hospitals has become a ghost facility after doctors and nurses walked out on Monday, leaving patients ...
News
2 years ago