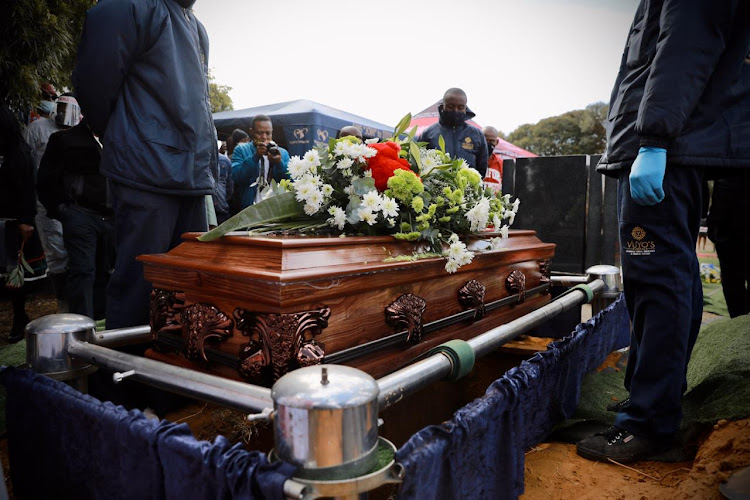 Tshegofatso Pule was laid to rest at the Roodepoort Cemetery in Soweto on June 11.
Image: Sebabatso Mosamo/Sunday Times

The deaths of women, some allegedly at the hands of men close to them, has sparked outrage as South Africans demand answers and justice.

Last week, many called on police minister Bheki Cele to intensify the fight against women abuse following the death of Soweto make-up artist Tshegofatso Pule, who was laid to rest on Thursday.

A 28-year old male suspect was arrested in Belhar, Cape Town, in connection with the murders of a 27-year old woman and a seven-year old girl. They are believed to be mother and daughter. The victims were found on Friday at a house in  Commerce Street, Belhar.

The woman had multiple stab wounds.

A 28-year-old suspect has been arrested for the murder of a woman and a young girl in Belhar, Cape Town.
News
1 year ago

Dobsonville residents made a gruesome discovery of a young woman's body on Friday. The body was dumped under a tree and had stab wounds. Police spokesperson Kay Makhubele told TimesLIVE on Monday morning that a male suspect was expected to appear in court on Monday morning.

He said preliminary investigations showed the woman was not killed at the spot where her body was dumped.

A man is expected to appear in court on Monday morning after being arrested for allegedly killing a woman and dumping her body under a tree in the ...
News
1 year ago

A 45-year-old woman was stabbed to death and her body discovered by a passer-by in a field on Friday. A male suspect, aged 36, was arrested, according to police spokesperson Capt Khaya Tonjeni.

Tonjeni said the victim's belongings were recovered from the suspect. He is expected to appear in court soon.

The country has been rocked by yet another brutal murder of a woman after a 36-year-old man was arrested in Mthatha on Tuesday for allegedly stabbing ...
News
1 year ago

The 26-year-old mother of three was murdered while attending a cultural function a week ago. She was hit and stabbed with an axe and knife by a suspect who handed himself over to the authorities soon after the incident.

'The way she died is unimaginable': Family, friends on killing of Naledi Phangindawo

The gruesome death of Naledi Phangindawo, who was hacked with an axe, has taken a heavy toll on the health of her mother and father
News
1 year ago

The body of eight months pregnant Pule was found hanging in a tree in a field by a Durban Deep resident on Monday last week. She had a stab wound in her chest.

She was reported missing on June 4 after she was last seen at a residential complex in Florida, Roodepoort.

She was allegedly fetched by her boyfriend from her aunt's Meadowlands home to go to buy maternity clothes on the same day.

No arrests have been made, but police have questioned the father of her child, JSE analyst Ntuthuko Shoba, according to Sunday Times.

Body of woman with hands, feet tied found in bag on Golden Highway

The body of a woman was found in a big red bag on the Golden Highway in Johannesburg on Sunday afternoon, police said.
News
1 year ago

Another woman found murdered in Eersterust, police search for boyfriend

Gauteng police have launched a manhunt after a 42-year-old woman was found murdered in Eersterust, east of Pretoria, on Sunday morning.
News
1 year ago

Tears, anger and despair: Meadowlands joins in to say goodbye to its daughter: 'We'll fight for you chomi'