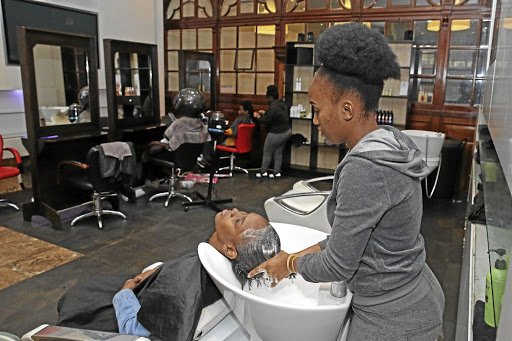 Hairdressers are among those to reopen under 'advanced level 3'. File photo.
Image: THAPELO MOREBUDI

SA may move to "advanced level 3" lockdown in the next few days, says minister of small business and development, Khumbudzo Ntshavheni.

According to Ntshavheni, the official decision to move the country to “advanced level 3" will be made on “Wednesday at the latest”, as the government is still waiting on the Health Advisory Council to give its recommendations.

What is advanced level 3?

Ntshavheni told eNCA that this was not a shift to level 2 but rather a few changes to lockdown level 3, and it would be beneficial for small businesses such as hairdressers and restaurants.

“When the president announced the movement to level 3, he also announced what he called the advanced level 3, which will include sit-down restaurants and also the opening up of personal care services,” Ntshavheni said.

She said her department had already completed the development protocols but that there were still some businesses that were seen as a concern, such as tattoo parlours.

What businesses will reopen?

The following businesses may be able to reopen under an advanced level 3 lockdown:

'Necessitated by a lack of relief funds'

Ntshavheni told  Power 98.7, that the decision to reopen sit-down restaurants was necessitated by a lack of relief funds to support businesses.

“The impact on the economy was severe and we went to cabinet after the survey was done and said we don’t have enough relief measures to support small businesses,” she said

“We are better off supporting businesses as they come back to the economy because now you are dealing with the viability of businesses.”

She said businesses will have to adjust to operating under the “new normal”.

“You are making them adjust to the new normal because we are going to live with Covid-19 forever so sanitising, social distance, handwashing and all those other things that are protective have to become the norm.”

Malema calls for return of ban on booze throughout lockdown

EFF leader Julius Malema has called for the reinstatement of the ban on alcohol for the whole duration of the Covid-19 lockdown.
Politics
1 year ago

Happiness soars as domestic airlines return to the skies

Safair and Mango say "welcome aboard" as domestic flights resume. Check here if you qualify.
Lifestyle
1 year ago

Durban hairstylists find ways to work while salons are closed

Though salons remain closed under level 3, hairstylists in Durban have managed to find ways to meet the needs of customers fed up with over two ...
News
1 year ago