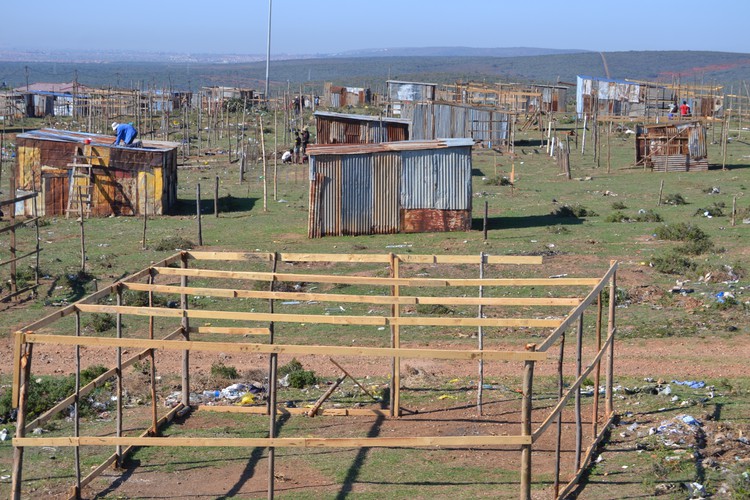 About 100 families on Thursday started erecting homes on a vacant plot in Khayelitsha, Uitenhage, in the Eastern Cape.

The new occupation has been named Covid Village. Residents said they had cleared litter and thick bush to build their shacks.

Brothers Phumelelo and Phumzile November built two shacks for themselves and charged a female neighbour to set up her one-room shack. The brothers are unemployed

“At last we will have what we call a roof over our heads during and after Covid-19,” said Phumzile.

Another land occupier, Nomonde Netnou, said she was building a house for herself and two children aged 13 and 16. She is unemployed and said she often had to use her children's grant to pay R400 rent.

“I have been a backyard dweller since 2007, also using my father’s pension money for rent. In Covid Village renting will be no more.  I will finally have my own place,” she said.

“People have increased prices ridiculously, knowing we are desperate. Everything is expensive. You have to hire someone to build a shack, and builders charge at least R300 for a shack with one room,” she said.

Community leader Vusumzi Ncula said many of the people occupying the land were doing so to “practise social distancing in overcrowded households".

“We met as residents of Ward 42. In that meeting two names were suggested for this new place: the 4th Avenue Village and Covid Village. Most people [voted for] Covid Village because people said it was occupied during a crisis.”

Ncula said for more than eight years the municipality has been telling them the land has been earmarked for a high school.

“We saw a sea of litter on this land instead of a school, so we decided to occupy without permission. Five years ago, we were chased away from this land by law-enforcement officers. We are back again because we see they will never keep the promise to build  a school,” he said.

Ward 42 Councillor Phakamisa Mfama said residents had no right to live there without services.

“I told them I have no land. I don’t know of any school that would be built on that site,” he said.

Municipal spokesperson Mamela Ndamase said the city was aware of the occupation.

“Residents took advantage of the Covid-19 lockdown as some metro law enforcers were not at work. We condemn the crime and urge residents to refrain from land invasion as it disrupts developments in the city.”

Ndamase said the city was considering whether to formalise the settlement or  follow legal processes for removal of the shacks.

The Supreme Court of Appeal (SCA) has upheld the landmark decision by the Land Claims Court to award a large portion of land, including the Fish ...
News
1 year ago

It's been 100 days since Covid-19 arrived in SA. Here's what has happened since then

The pandemic arrives in SA. Leap year day, February 29 2020: a South African man in his late 30s from Hilton in the KwaZulu-Natal midlands boards an ...
Opinion & Analysis
1 year ago

Uitenhage stylist uses his hair to protest against Covid-19 lockdown

KwaNobuhle hairdresser Onele Cembi has found a way to register a protest against lockdown conditions: writing his protest in his hair.
News
1 year ago