Five stories you must read on dexamethasone, the Covid-19 'miracle drug' 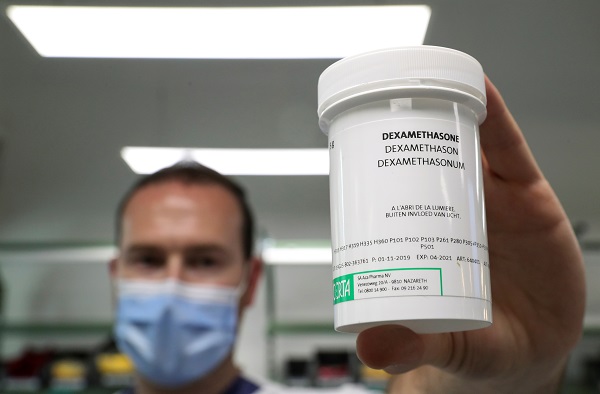 A pharmacist displays a box of dexamethasone at the Erasme Hospital in Brussels, Belgium, on June 16 2020.
Image: REUTERS/Yves Herman

Dexamethasone, a steroid drug manufactured in SA, has been dominating news headlines after a UK study revealed its effects in reducing deaths among critically ill Covid-19 patients.

There are five must-read stories on the “miracle” drug:

A study that changed everything

Oxford University on Tuesday released preliminary results from its study which showed that dexamethasone reduced death rates among Covid-19 patients by up to a third, and suggested that it should be prescribed as standard treatment for severely ill patients.

The study has not been peer-reviewed.

The drug was tested among 2,100 patients who were given the steroid and around 4,300 patients who did not receive it. They were all chosen randomly. The study also suggested that treatment with dexamethasone can prevent one death in eight severely ill Covid-19 patients.

A cheap and widely-used steroid called dexamethasone has become the first drug shown to be able to save the lives of COVID-19 patients in what ...
News
2 years ago

Health minister Zweli Mkhize said the SA government was “excited” to learn that dexamethasone, which is largely produced in SA, would help in the fight against Covid-19. Mkhize said protocols in the health system would be updated so health-care professionals are able to use it when there is a need.

Zweli Mkhize 'quite excited' about dexamethasone to treat Covid-19

Health minister Zweli Mkhize on Thursday said the latest Covid-19 treatment breakthrough, which found that the steroid drug dexamethasone can be used ...
News
2 years ago

Addressing the nation on Wednesday, President Cyril Ramaphosa supported the use of the drug, saying the department of health and the ministerial advisory committee had recommended its use among patients on oxygen and ventilators.

He said dexamethasone would improve SA's management of Covid-19.

President Cyril Ramaphosa has lauded the latest Covid-19 treatment breakthrough, which found that the drug dexamethasone can reduce deaths of ...
Politics
2 years ago

Experts weighed in on the study. Dr Kathryn Hibbert, director of the medical intensive care unit at Harvard's Massachusetts General Hospital, will not change practice until she has seen the data herself.

Dr Thomas McGinn, deputy physician-in-chief at Northwell Health, warned that steroids can suppress the immune system. He said he wants to see the data on which the study was based.

Show me the data: US doctors skeptical of reported Covid breakthrough

The report on Tuesday of a powerful treatment for the new coronavirus brought skepticism along with optimism among US doctors, who said the recent ...
News
2 years ago

Dr Moherndran Archary,  a paediatric infectious disease specialist at the University of KwaZulu-Natal, told TimesLIVE that dexamethasone does not cure Covid-19 but works on the immune system's response to the disease.

He said it doesn't make much of a difference for patients who are not critically ill. The treatment is not available over the counter and would be used by doctors in ICU.

Dr Stavros Nicolaou, spokesperson for Aspen Pharmacare, the SA-based company which manufactures dexamethasone, said its impact in the reduction of death rates by up to a third was significant.

Experts have warned that the new Covid-9 breakthrough drug dexamethasone is available strictly on prescription and cannot be used to prevent or cure ...
News
2 years ago