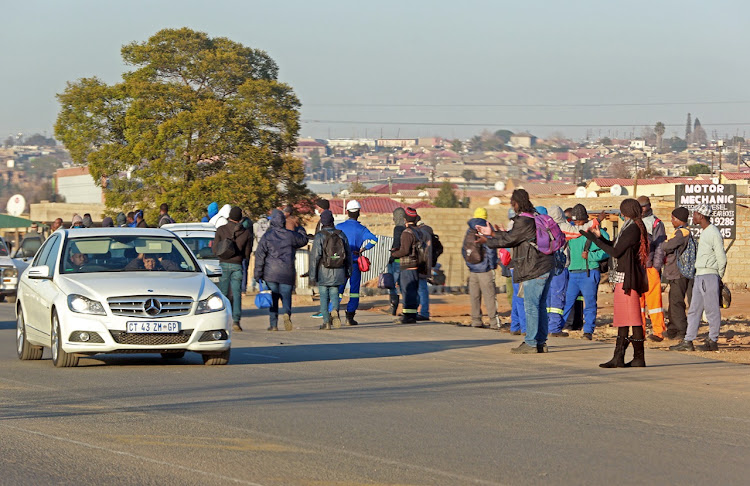 Commuters in Tembisa were left stranded and pleading for lifts to work when the taxi strike started on Monday.
Image: Sunday Times/Thapelo Morebudi

Commuters were left stranded across Gauteng, roads were barricaded and a bus hijacked as the SA National Taxi Council (Santaco) embarked on a strike on Monday to protest against a R1bn government relief package for the industry.

The council said in a letter “we were expecting at least R20,000 per vehicle” but would receive significantly less out of the package announced by transport minister Fikile Mbalula.

Police and soldiers were deployed to clear some blocked roads, leading to an early morning gridlock, while frustrated commuters faced being crammed together in whatever transport they could find and plead for lifts. Others were ordered off buses.

Tshwane metro spokesperson Selby Bokaba said protesters attempted to hijack a city bus at Olievenhoutbosch, but the driver managed to escape and return to the depot.

“In a second incident, taxi drivers successfully hijacked a bus with passengers in Danville. They took the bus with the driver and went to block the other side of the road. They refused to let the bus driver use his phone and threatened him and the passengers, but he remained calm.”

Metro police were called in to rescue the driver and passengers.

Karabo Maphoto was on her way to work in Rivonia, Sandton from Dobsonville, Soweto, at 5.30am and had to wait nearly two hours for a bus.

Kubi la eDobsonville, taxi drivers are threatening to burn buses so we had to get off #Taxistrike pic.twitter.com/442GliYQld

“The two buses that did come were stopped by taxi drivers and they threatened to burn them if they continued so people got off. The buses that are moving now are being stopped by taxi queue marshals to ensure there are no passengers on them and the buses can go back to the depot.

“This means we cannot go to work today. I saw more than 50 people walking back home and others getting lifts to return home,” said Maphoto.

She said commuters were not harmed.

“They did not make us feel unsafe. They communicated well and let us off without harm. There's really no physical violence, just the use of vulgar language to stop the bus drivers from driving.” she said.

Santaco said the shutdown was planned for Monday and Tuesday.

Motorists travelling on the M17 from Mabopane were forced to turn back.

Most taxi ranks had been deserted, leaving thousands of commuters stranded.

“The queues at taxi ranks are longer than normal. Commuters will have to use alternative transport this morning.” 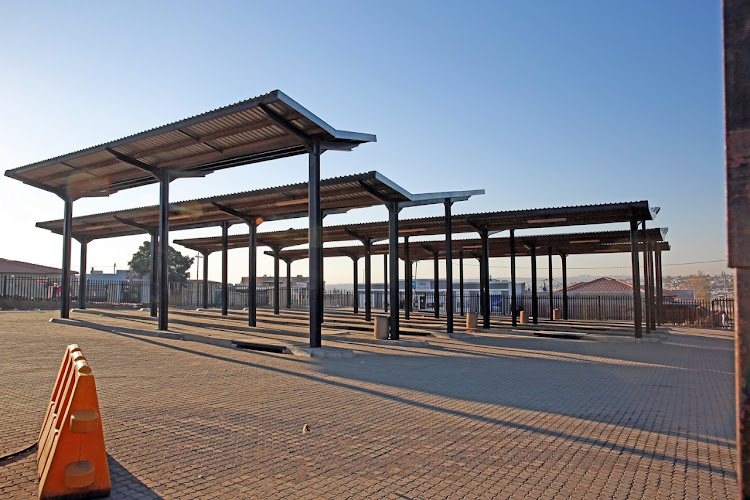 During a virtual press conference on Sunday, Mbalula said increasing the amount provided in the relief package was “simply not an option on the table”.

“The door is still open for creative ideas to maximise value for this limited benefit for all operators in the industry.

“We have emphasised many times before that whatever support we avail to the taxi industry, it must be for the benefit of all operators.”

Mbalula said R1.135bn would be given to taxi operators.

Last week, Santaco said a nationwide taxi fare increase has been announced with effect from July 1.

Spokesperson Thabisho Molelekwa said at the time that the industry faced a situation in which many taxis would be repossessed without some form of financial relief. The industry has felt the financial impact of the pandemic lockdown and not being permitted to transport a full load of passengers per vehicle.

Molelekwa said if nothing was done, in the next six to eight months at least 45% of taxis would be repossessed.

Mali said taxi drivers would keep their vehicles stationed at taxi ranks and not ferry any commuters. He said the strike would be peaceful and without any disruptions to alternative transport for commuters.

“Government must urgently speak to the banks to stop harassing our members to repossess their vehicles during this difficult time of Covid-19.”

Taxi fare hikes in Gauteng capped at R5 and R7

Not every minibus taxi route in Gauteng will increase by R7 or R5 next month, but these have been set as limits for the industry in the province.
News
11 months ago

Taxi bosses have rejected a R1.1bn Covid-19 relief payment from the government and are threatening to bring SA to a halt unless they get billions ...
News
1 year ago

Santaco announced on Friday that taxi fares would increase nationwide from July 1.
News
1 year ago