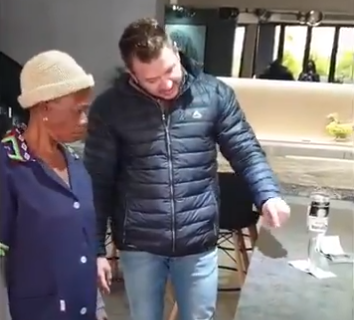 Thembi and her employer Malcolm Wentzel have become internet sensations. Their close relationship is loved by many.
Image: Twitter/@Sikhosanasa

The videos were uploaded by Wentzel on video sharing app TikTok. One of the videos has more than one million views and has been shared by thousands of social media fans.

Thembi told City Press that she had not been aware that her employer was filming content for the video sharing app. She said she has been flooded with positive feedback on social media as well as calls from her neighbours.

The publication also reports that Ubisi is from Mpumalanga and lives in Emalahleni. She has worked for Wentzel for almost 10 years.

“It makes me feel happy, I didn't know that he was doing TikTok. We were just having fun and then a lot of people started calling me, especially from my area.”

Wentzel told the publication that he and Ubisi are a team.

“Well first, all the people I employ, they don't work for me, we work together. If Thembi doesn't want to work or comes in late, there are no deductions or anything like that.”

Wentzel has more than 92,000 followers on the video-sharing app.

One of the videos shows Thembi waking up “hung over” Wentzel in the morning. In another, she asks him for his most expensive bottle of champagne on a Friday afternoon.

Social media users have been divided, as some accused Wentzel of using Ubisi for the creation of social media content.

Watch some of the videos.

'Wake up, I'm tired of you and your hangover'

Guys Thembi threw water at him on some “I’m tired of you” 😂 pic.twitter.com/dDTTH6okN9

A message from Thembi and her boss. I hope Woke Twitter will have peace. #FathersDay #A31forDad #Khanyimustbearrested pic.twitter.com/GDxnaUEtCx

Thembi saying “hello guys” while she is driving is actually a mood 😂😂
These two kodwa 😂 pic.twitter.com/ntU7XDdTKD

Thembi asks Malcolm for his most expensive bottle

Sis Thembi and her boss🔥🔥 pic.twitter.com/9uqnZrINyq

IN FULL | Why cabinet decided to allow restaurants, casinos, hairdressers to open

India's Tata Motors Ltd expects to shed about 1,100 temporary jobs at Jaguar Land Rover after it raised the cost-cutting target at its luxury unit by ...
Motoring
2 years ago