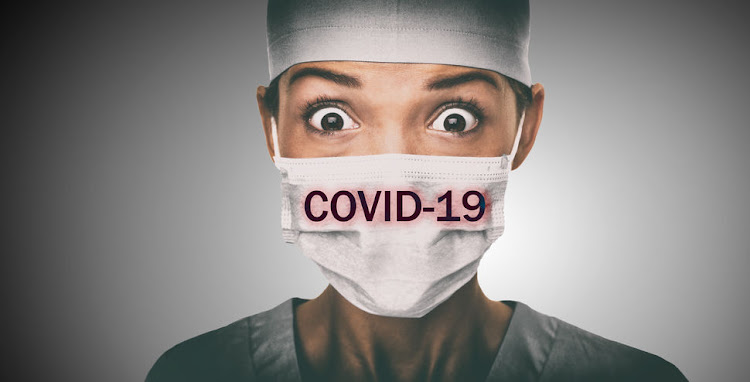 SA can expect to have 408,000 confirmed cases of Covid-19 by mid-July, says the national modelling consortium for the virus. The vast majority will be asymptomatic or mild.
Image: 123rf/maridav

SA can expect to have detected 408,000 cases of Covid-19 by mid-July, according to the latest projection by the national modelling consortium.

The number of deaths by mid-July is expected to be 7,440 says the document outlining short-term projections, posted on the National Institute for Communicable Diseases website on Wednesday.

Scientists led by Harry Moultrie warn that the Western Cape and Eastern Cape are likely to run out of intensive-care beds in June.

But they add a rider: “ICU and hospital bed numbers are to be interpreted with caution, as use of hospital beds is influenced by treatment practices, and admission to ICU is likely to be subject to criteria that change through time and as a function of resources available.”

They also say the number of identified Covid-19 cases could be much lower than the total they anticipate if testing patterns change.

This has already happened in the Western Cape, which is prioritising testing of hospitalised patients, health-care workers, the elderly and individuals with co-morbidities and respiratory symptoms.

“Prioritisation of testing may result in a reduction in detected cases to approximately 133,000,” says the consortium's report.

The document is based on data on confirmed infections until June 5, when SA had 43,434 cases. By Wednesday, the total had reached 106,108, and it is doubling every 14 days.

There are likely a million cases of Covid-19 in SA right now: Prof Madhi

Prof Shabir Madhi, lead researcher on the Covid-19 vaccine trial that starts in Johannesburg on Wednesday, says there are likely one million South ...
News
1 year ago

“Due to the rapidly changing nature of the outbreak globally and in SA, the projections will need to be updated regularly and should be interpreted with caution,” the consortium said.

“The models have been developed using data that is subject to a high degree of uncertainty. Transmission has been modelled at national and provincial levels, resulting in model predictions providing broad-stroke national/provincial guidance rather than informing strategy at a more granular level.

“All models are simplifications of reality that are designed to describe and predict system behaviour and are justified by the assumptions and data with which they are developed.” 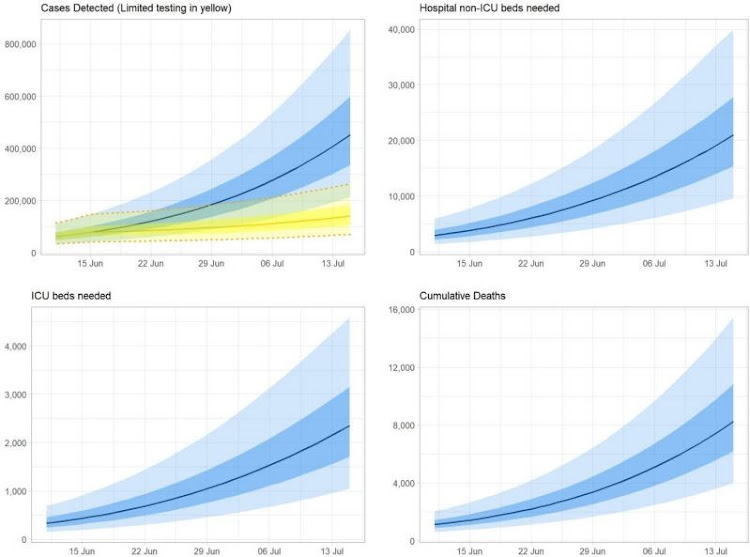 The consortium said that between March 21 - the 17th day of SA's outbreak, when just 240 cases had been diagnosed - and June 5, the growth of the epidemic was different in each province because the disease had seeded differently in communities with varying contact behaviour.

“Severe and critical cases were assumed to receive a test, with only a proportion of mild cases being tested,” said the consortium.

“It is important to realise that not all active cases will require health care. A substantial proportion of infections (75%) are assumed to be asymptomatic or very mildly ill such that they would not require an outpatient care visit and would be very unlikely to seek Covid testing.

“Approximately 96% of active symptomatic cases are predicted to be mildly ill, with only a fraction of those seeking outpatient care or Covid testing. Therefore, large case numbers do not necessarily present a large burden on the health system.

“As has been the experience of many countries around the world, the vast majority of Covid-19 cases will show no, or mild, symptoms.”

Zweli Mkhize: My fear is some citizens may realise the severity of Covid-19 far too late

Covid-19 has put pressure on everyone in SA, but particularly the health minister of a country in the grip of a pandemic.
Opinion & Analysis
1 year ago

The National Covid-19 Epi Model developed by the consortium assumed that while all hospitalised cases will receive a laboratory-confirmed diagnosis, only a fraction of mildly symptomatic cases would be detected.

“This fraction has been based on inflation factors determined by reviewing the number of confirmed Covid-19 cases, evolution of ‘person under investigation’ criteria for Covid-19 testing, the number of contacts identified and proportion traced, and publications/reports on under-detection rates in other countries.”

Due to current backlogs in testing, detection was modelled to detect only one in five mild cases. If more provinces adopted the Western Cape strategy, this number would fall further.

The South African Covid-19 Modelling Consortium is a group of researchers from academic, non-profit and government institutions.

Its mandate is to provide, assess and validate model projections to be used for planning purposes by the government.

As the Western Cape approaches its Covid-19 infection peak, the province’s biggest hospital, Tygerberg, has ditched its paper-based patient folders ...
News
1 year ago

The Western Cape reached another bleak Covid-19 milestone on Tuesday as it chalked up its 1,500th death.
News
1 year ago