'I want doctors to learn from me': Soweto man first to take Covid-19 trial jab

There are likely a million cases of Covid-19 in SA right now: Prof Madhi

This is not only the biggest single-day increase in confirmed cases, but also the first time that more than 5,000 cases have been recorded in a single day.

The increase means that, by Wednesday night, there were 111,796 confirmed cases of the respiratory infections caused by the coronavirus in SA.

WHO expects virus cases to hit 10-million next week, yet to peak in Americas

The World Health Organisation said on Wednesday it expected coronavirus cases to hit 10-million worldwide in the next week, as it warned the virus was yet to peak in the Americas.

"We expect to reach a total of 10-million cases in the next week," WHO chief Tedros Adhanom Ghebreyesus told a virtual press conference.

'This is crazy - it's like a machine': nurses on the Covid-19 front line in the Western Cape

This is what two Western Cape nurses on the Covid-19 front line wrote on social media on Wednesday, expressing their frustration and helplessness at having to deal with patients laid low by the respiratory illness.

The eight, who are from Soweto, are among 2,000 people from across Gauteng who will take part in the project.

The aim of the trial is to find a vaccine for the deadly coronavirus, which to date has infected over 106,000 South Africans and killed more than 2,100 people.

The economy is headed to its biggest contraction in 90 years as a result of the coronavirus outbreak.

This is according to finance minister Tito Mboweni, who was tabling his emergency supplementary budget on Wednesday during a virtual sitting of parliament.

Mboweni said the National Treasury now expected the local economy to shrink by 7.2% — the largest contraction in almost a hundred years.

SA economy expected to have biggest contraction in 90 years: Tito...

In the supplementary budget tabled by Mboweni on Wednesday afternoon, the biggest allocations are for social grants, health, education and local government.

Around R41bn has been set aside for social grants, which have been expanded over the next six months in order to cushion the blow for the most vulnerable. This includes a R350 social relief grant to up to 8-million people who are unemployment or employed in the informal economy but receive no other grants.

Finance minister Tito Mboweni laid out the full extent of the damage wrought by the Covid-19 crisis on the state’s already weak finances in his supplementary budget speech on Wednesday.

The minister confirmed expectations of a substantial rise in debt levels and a widening budget deficit.

South Africa's budget deficit is projected to widen to 14.6% of gross domestic product in the current 2020/21 fiscal year.

Gross government debt will rise to 81.8% of GDP in the current fiscal year from 63.5% last year.

Economy expected to shrink to record-low

South Africa's economy is projected to shrink to a record 90-year low of 7.2 percent.

Mboweni said the continent's most developed economy "is now expected to contract by 7.2 per cent in 2020," adding: "This is the largest contraction in nearly 90 years."

Over 18 million South Africans have received a temporary Covid‐19 grant.

"The roll out of the short‐term Special Relief of Distress grant will temporarily support those without an income," said Mboweni.

"An additional 1.5 million people have received these already. To support vulnerable households, an additional allocation of R25.5 billion to the Social Development department is proposed, for a total relief package of R41 billion.

"All these measures will come to an end in October."

"It also proposes a further allocation of R12.6 billion to services at the frontline of our response to the pandemic.

"Allocations have been informed by epidemiological modelling, a national health sector Covid‐19 cost model and our experiences over the past 100 days. This money partly supports increased screening and testing, allowing us to open up more and more of the economy," said the minister.

Tax revenue is down

Gross tax revenue collected during the first two months of 2020/21 was R142 billion, compared to our initial forecast for the same period of R177.3 billion, said Mboweni.

"That means that we expect to miss our tax target for this year by over R300 billion."

"We have accumulated far too much debt; this downturn will add more. This year, out of every rand that we pay in tax, 21 cents goes to paying the interest on our past debts.

"This indebtedness condemns us to ever higher interest rates. If we reduce debt, we will reduce interest rates for everyone and we will unleash investment and growth.

"So today, with an eye on the future, we set out a strategy to build a bridge to recovery.

"Our Herculean task is to close the mouth of the Hippopotamus! It is eating our children’s inheritance. We need to stop it now!

"Our Herculean task is to stabilise debt," the finance minister said.

Finance minister Tito Mboweni is expected to deliver the supplementary budget speech at 3pm on Wednesday, after the government’s announcement that it would spend R500bn to support the economy during the Covid-19 pandemic. 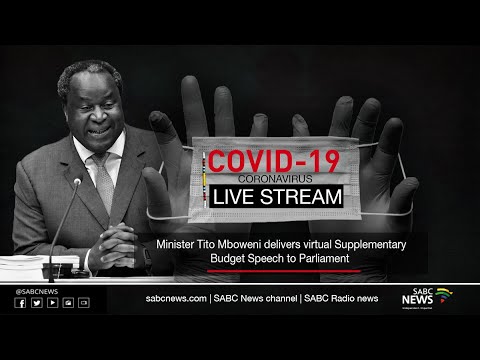 SA can expect to have detected 408,000 cases of Covid-19 by mid-July, according to the latest projection by the national modelling consortium.

The number of deaths by mid-July is expected to be 7,440 says the document outlining short-term projections, posted on the National Institute for Communicable Diseases website on Wednesday.

Scientists led by Harry Moultrie warn that the Western Cape and Eastern Cape are likely to run out of intensive-care beds in June.

The National Professional Teachers' Organisation of SA (Naptosa) is concerned about how many teachers with underlying health conditions are at increased risk from the coronavirus.

Its concern is based on a “health status” survey conducted last month to which 130,655 teachers, out of a total staff complement of 442,268 and belonging to various teachers' unions, responded .

Junior Mhlongo, 24, of Soweto has just been injected with, what South African medical scientists and vacinologists hope, will stop the global spread of Covid-19.

'I want doctors to learn from me to help others': Soweto man joins...

Image: Alaister Russell/The Sunday Times Junior Mhlongo is the first South African to be injected with a Covid-19 vaccine on June 24 2020.

Gauteng health authorities are monitoring Covid-19 cases at mental health facilities across the province where 168 staff and patients have tested positive.

The affected institutions are run by the provincial health department and also contracted facilities. Two patients with underlying illnesses have died in the past nine days.

Image: Alon Skuy Residents of Kliptown in Soweto carry food donated by photojournalist Ilan Ossendryver. He says he is using the camera as a "social activist" tool. He runs the initiative with Howard Sackstein and Caron-Leah Resnick.

Frustrated workers at Playtex, an undergarment manufacturer in Durban, have downed tools in protest over unpaid UIF Covid-19 relief funds.

They demonstrated outside the premises on Wednesday while company bosses held a meeting with shop stewards.

“The company got the UIF money but that money has not reached workers' pockets,” one worker claimed.

In a message to parents via the school's D6 communication portal, headmaster Barry Wilson said he was told on Tuesday evening by the parent of a grade 7 pupil that the youngster had tested positive.

“The learner started feeling unwell at the weekend and was taken to his doctor on Monday. He has not been at school at all this week and his results came through to his family last night,” he said.

The elderly and the disabled will be prioritised when thousands of residents in some Western Cape informal settlements are relocated to newer communities as part of the Covid-19 de-densification process.

The department of human settlements in the Western Cape says it plans to move 1,500 Dunoon residents, with planning and designing at a nearby piece of land already in motion.

Dunoon, one of Cape Town’s overcrowded communities, is one of three townships in the Western Cape that are set for de-densification as part of social distancing amid Covid-19. The other two areas where thousands are set to be relocated from are Kosovo and Khayelitsha.

Elderly and disabled to move first in Covid-19 relocations in Cape...

Pharmacy association warns against use of dexamethasone to prevent Covid-19

The elderly and the disabled will be prioritised when thousands of residents in some Western Cape informal settlements are relocated to newer communities as part of the Covid-19 de-densification process.

The department of human settlements in the Western Cape says it plans to move 1,500 Dunoon residents, with planning and designing at a nearby piece of land already in motion.

Dunoon, one of Cape Town’s overcrowded communities, is one of three townships in the Western Cape that are set for de-densification as part of social distancing amid Covid-19. The other two areas where thousands are set to be relocated from are Kosovo and Khayelitsha.

Pharmacy association warns against use of dexamethasone to prevent...

Government gives PSL green light to return to the field

#Covid19InSA || The Gauteng Department of Health (GDoH) is closely monitoring COVID-19 cases at both the departmental-run mental health institutions and at contracted facilities. #GautengCOVID19 pic.twitter.com/CXWmSr92Fp

#Covid19InSA || The Gauteng Department of Health (GDoH) is closely monitoring COVID-19 cases at both the departmental-run mental health institutions and at contracted facilities. #GautengCOVID19 pic.twitter.com/CXWmSr92Fp

Firms, do this now or you’ll be deep in the Popi

Be warned: the personal information protection act is here.

So, if you own a business, start working on compliance ASAP.

Firms, do this now or you’ll be deep in the Popi

HIV patients at less risk of Covid-19 than those with diabetes or hypertension: NICD

While HIV-positive people are at an increased risk of dying from Covid-19 than those who are HIV-negative, they are at significant less risk than those with other underlying illnesses.

This is according to analysis done by the National Institute for Communicable Diseases (NICD) in the Western Cape, which revealed that people living with HIV were at a “modestly” increased risk of dying from Covid-19, whether the virus is suppressed or not.

However, they are not at a higher risk of dying from Covid-19 than those with other underlying illnesses such as diabetes and hypertension.

HIV patients at less risk of Covid-19 than those with diabetes or...

As the Western Cape approaches its Covid-19 infection peak, the province’s biggest hospital, Tygerberg, has ditched its paper-based patient folders for voice and electronic notes.

This in an effort to reduce transmission of the respiratory diseases among healthcare workers.

An ambitious digitisation project of the hospital’s Covid-19 intensive care unit will not only improve the care of seriously ill Covid-19 patients and reduce infection among healthcare workers, but the installation of cameras could potentially allow stable patients to have video calls with their families.

As the country waits for finance minister Tito Mboweni's budget speech, economists have expressed their expectations.

Mboweni is expected to deliver the supplementary budget speech on Wednesday, following the government’s announcement that it would spend R500bn to support the economy during the Covid-19 pandemic.

SAA, jobs & Sars shortfall: Economists on expectations ahead of...

The Motetema police station outside Groblersdal in Limpopo was closed on Tuesday for decontamination after an officer tested positive for Covid-19.

The officer has been placed under quarantine and other members who came in close contact with the member have been isolated, police spokesperson Col Moatshe Ngoepe said.

Finance minister will on Wednesday give South African some much needed clarity on the economic ramifications Covid-19 has had so far.