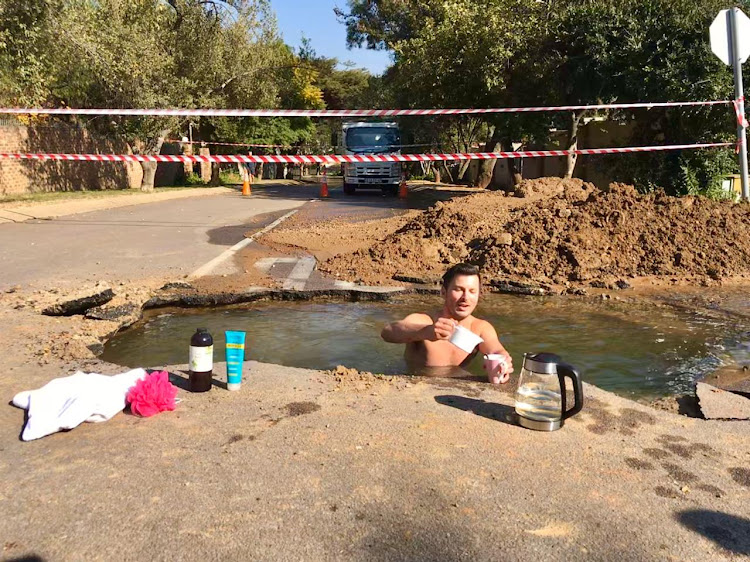 A Fourways resident took to the streets recently to raise awareness about the failing water system in his neighbourhood.
Image: Supplied

Two weeks after a Fourways, Gauteng, resident took a bath in a sinkhole in the middle of the street to raise awareness about pipe bursts in his neighbourhood, the water is yet to be fully restored.

The man, who asked to be referred to only as Nicholas, said for the past two weeks the water has been coming on and off due to repairs.

There had been 36 pipe bursts in 24 days in the area, confirmed Chris Santana, the councillor for ward 106.

It has been a stressful few weeks for Fourways residents battling limited-to-no water supply.

“We’ve been holding thumbs as the water comes and goes. If there’s another burst they might have to switch off our supply entirely to fix the problem.”

He said the pipe had burst on his street three times. “The latest was on Sunday, after a pipe Joburg Water had repaired and covered in sand re-burst,” Nicholas said.

He said there was construction under way by the city to fix the water problem.

A Fourways, Gauteng, resident took a bath in a sinkhole in the middle of the street at the weekend
News
1 year ago

Santana said they were hopeful the water would be restored soon.

“The problem carries on. The water comes and goes but there’s a team dedicated to the area to treat it as a priority. A lot of homes are affected,” Santana said.

Joburg Water has told residents it was dealing with the intermittent water supply problems which are caused by recurring pipe bursts on the ageing asbestos-cement pipes which are reaching the end of their useful life.

“We have started the process of generating a work request that should get priority and funding through our planning and capex [capital expenditure] programme.

“In the meantime we will have a standby team dedicated to the area, specifically, and will work around the clock to do repairs as the burst pipes occur to limit the duration of the water interruption. Furthermore we will be doing a pipe replacement for at least 130m of Tarentaal Street at the weekend. Residents will be affected only during the tie-in process for a few hours,” said Joburg Water.

Recently, as a result of the Covid-19 pandemic, there has been a recognition in SA of the importance of access to water and sanitation for people ...
Opinion & Analysis
11 months ago

As the dust continues to swirl around the Eastern Cape’s R10m fleet of Chinese motorcycle ambulances, another procurement row has erupted in ...
News
11 months ago