KwaZulu-Natal premier Sihle Zikalala on Sunday revealed that more than 450 health-care workers have tested positive for Covid-19 in the province.

He said 478 cases, including doctors, nurses, allied health-care workers and support staff, were reported in both private and public health-care sectors.

“Out of concern for the growing statistics in this regard, we are undertaking the following interventions per department: intense and regular training of staff, which will include programmes to promote behavioural change; psychological maturity and de-stigmatisation of Covid-19. We will also intensify training on donning and doffing procedures, referring to how to put on the protective gear, and how to take it off safely.

“We also want all nurses to take on the role of being champions of Covid-19 so they can monitor each other. We will also continue consulting with labour unions in this regard,” Zikalala said. 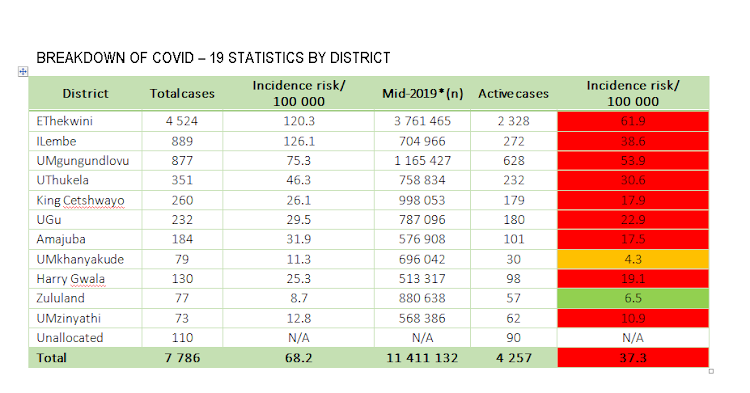 The median number of Covid-19 cases reported in the province is 30 cases daily.
Image: supplied

“A week ago, we had 5,030 confirmed cases, 84 deaths, and 2,594 recoveries. This means that in the past week, 2,756 people have tested positive, 28 sadly lost their lives, while 823 thankfully recovered. The most common recorded co-morbidities among the deceased are hypertension and diabetes mellitus. Nine of the deceased were reported to have been HIV positive,” Zikalala said.

He said KwaZulu-Natal was receiving a variable number of new cases daily.

“The median number of cases reported in the province is 30 cases daily. eThekwini, iLembe and uMgungundlovu have had a remarkable number of cases provincially. Approximately all the districts have had an upsurge of cases since the beginning of June 2020. Notably this week, uMgungundlovu district reported more cases than iLembe daily and now occupies the second spot in terms of the provincial infection rate. Ugu and Harry Gwala districts are recording cases from the Eastern Cape due to their proximity to the province.

“iLembe district is now the third-highest district in terms of infection rates provincially. The district had a slight decrease in the number of new cases for the past two weeks,” Zikalala said.

eThekwini is still the epicentre of Covid-19 in the province.

“In uMgungundlovu, the concerning subdistricts are uMsunduzi subdistrict with 646 cases, and uMngeni with 57 cases. Before June, the other five subdistricts were reporting zero cases daily. However, as of June even these subdistricts started to report new cases on a daily basis.”

Health minister Dr Zweli Mkhize has appealed to South Africans to not “let their guard down” and to remain focused and disciplined during the fight ...
News
1 year ago

The National Health Laboratory Service has dismissed claims that there is no clinical value in the health department's strategy to test Covid-19 ...
News
1 year ago

In the time it takes to read these first few lines, another four people in SA will have been diagnosed with Covid-19 as the disease comes closer to ...
News
1 year ago