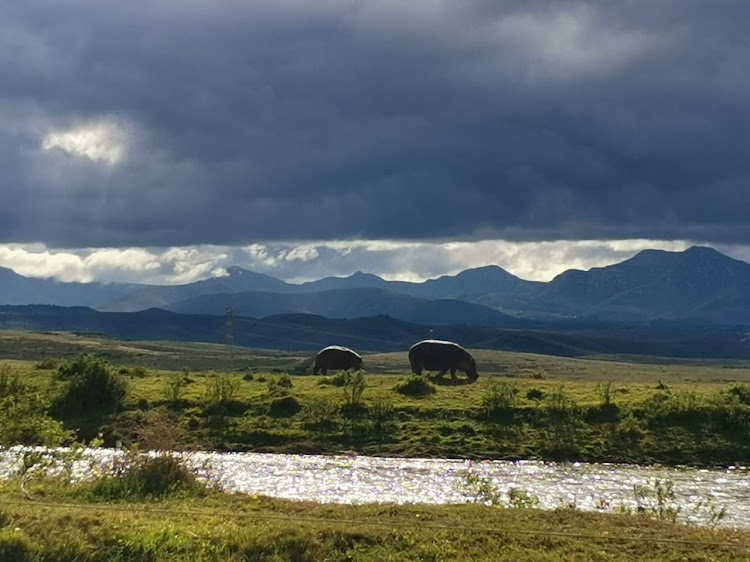 It could be love: Bambi and Fatboy graze on Bergsig game farm in Mossel Bay. It has been reported that they are seen together 'nearly every day'.
Image: City of Cape Town

Seven months of turmoil for a Cape Town hippo have ended in what could be love.

Since November, the hippo - named Bambi - has been living alone in a pan at the waste water treatment works in Strandfontein.

Her isolation followed rejection by the hippo herd at False Bay Nature Reserve at Rondevlei.

But after being moved to a game farm in Mossel Bay last week, Bambi quickly teamed up with its resident male, Fatboy.

“Since then, they have been spotted together nearly every day – an unexpected happy ending for all concerned,” a city of Cape Town statement said on Wednesday. Bambi's ordeal began seven months ago when nature reserve staff saw Bambi in Rondevlei, where she was looking for a new home.

“Due to the dynamics of the main hippopotamus population, where the dominant male chases away and sometimes kills his offspring to limit breeding competition, it was not advisable for the team to reintroduce the hippo back into its pod. The hippo therefore needed a new home,” said the statement.

“Staff facilitated the moving of the animal to a pan at the [treatment works] and erected an electric fence to contain it. The fence, 3km in extent, had to be erected in a day.”

A boma was built and equipped with infrared beams which would close the door if Bambi entered.

“On the night of June 22, 111 days since the start of the capture operation, the hippo was finally caught inside the boma where it was found to be in a calm state, occasionally grunting and snorting,” said the statement.

Bambi was immediately loaded into a truck and taken to Bergsig, a 5,000ha game farm in Mossel Bay, which had approached False Bay Nature Reserve about sourcing a hippo.

“It is extremely difficult to tell the sexes apart, but upon arrival the Bergsig staff believed [Bambi] to be female,” said the statement, adding that she teamed up with Fatboy two days later.

WATCH | Hippos, hyenas and wild dogs battle it out for two impalas

In what has been described as a rare sighting, cameras have captured an intense interaction between hyenas, hippos, wild dogs and impalas.
Lifestyle
11 months ago

The department of agriculture, land reform and rural development has proposed adding numerous more species to the Meat Safety Act, including ...
News
11 months ago

WATCH | Hippos waddle in peace while St Lucia is in lockdown

While residents of St Lucia remain in lockdown, nothing has stopped the hippos living around the popular KwaZulu-Natal holiday spot from taking their ...
News
1 year ago
Next Article