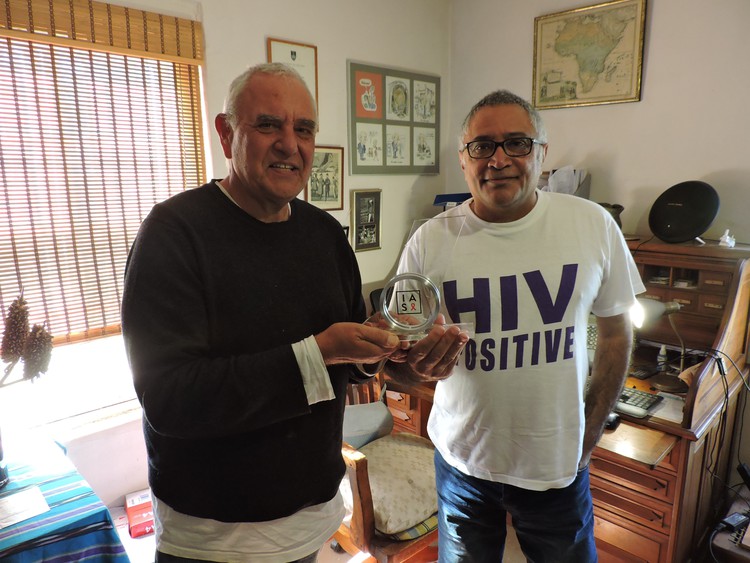 Zackie Achmat (right) with friend of many decades Jack Lewis after Achmat received the 2018 International Aids Society President’s Award during a webinar on Thursday.
Image: GroundUp

Zackie Achmat, activist and co-founder of the Treatment Action Campaign (TAC), has stressed the need for more openness and activism during the Covid-19 crisis in SA.

He was speaking during a webinar on Thursday in which he received the 2018 International Aids Society (IAS) President’s Award.

The award was handed to him, virtually, by outgoing IAS president Prof Linda-Gail Bekker. The event was hosted by the Desmond Tutu HIV Foundation.

Achmat pointed out that much of the response to Covid-19 globally was a consequence of the work done in response to HIV over the past few decades. He raised several issues for activists to address, including the high cost of the drug remdesivir (which has been found to reduce the length of illness with Covid-19), and the accessibility of a future Covid-19 vaccine.

“What has worried me is that there hasn’t been an openness about people having Covid-19,” said Achmat. He said he knew of activists who have not disclosed their Covid-19 status.

Nompumelelo Mantangana, a nurse in Khayelitsha who was at the forefront of the first antiretroviral treatment programme in the township two decades ago, said there had been no leadership from civil society in dealing with Covid-19.

“We are thrown in the deep end as health workers; we are in the forefront and we are dying. Civil society has taken a back seat and they are working from home – which is very scary and worrying, because community activism should be led by civil society,” said Mantangana. She stressed the need for the door-to-door campaigns that Aids activists ran to educate people about the disease.

Justice Edwin Cameron, who also spoke at the event, said that Achmat saw “with compelling energy that those most affected by HIV were and would be poor and marginalised and already-stigmatised communities – and that decisive activism had to be injected into management of the epidemic to secure justice for these communities.”

“That is why he confronted the drug companies – and faced them down, morally shaming them, and forcing them to concede price reductions, parallel imports and generic manufacture. That is why Zackie confronted the awesome power and forbidding hostility of the democratic government of president Thabo Mbeki over his catastrophic and tragic Aids denialism. Here, too, Zackie and his activist energies and comrades triumphed.”

He explained why Achmat was receiving the 2018 award only in 2020. In May 2018, he said, Achmat had been accused by anonymous people of covering up a sexual harassment allegation against an Equal Education employee while Achmat was chair of the organisation. “They unwarrantedly slurred his name”, said Cameron, and in response, “precisely because of his commitment to process and to fairness”, Achmat had declined to receive the award until he had cleared his name. Achmat was cleared of the allegation in an independent inquiry.

Risk of dying from Covid-19 for people with HIV

Andrew Boulle, who is a professor of Public Health Medicine at the University of Cape Town, also gave a presentation at the event. He noted that while the comorbidities associated with higher Covid-19 deaths were quite well-described (such as diabetes and obesity), the risk of HIV as a Covid-19 comorbidity has not been well understood until now.

“The picture of HIV is a little bit less clear [than other comorbidities]. It does not look like there is a massively higher prevalence of HIV and people dying from Covid-19,” said Boulle.

He presented data from the Western Cape. After adjusting for various factors it appears that the relative risk of people with HIV dying of Covid-19 was 2 to 2.5 times higher than for HIV-negative people, but this is still much lower than the risk associated with diabetes."

Described by friends, colleagues and family as a soft soul who got along with everybody, HIV/Aids activist Nomandla Yako died on Sunday night in ...
News
1 year ago

Poverty-stricken parts of Cape Town are heading for Covid-19 mortality rates that rival the worst-hit areas of the world, it emerged on Thursday
News
1 year ago

HIV patients at less risk of Covid-19 than those with diabetes or hypertension: NICD

While HIV-positive people are at an increased risk of dying from Covid-19 than those who are HIV-negative, they are at significant less risk than ...
News
1 year ago