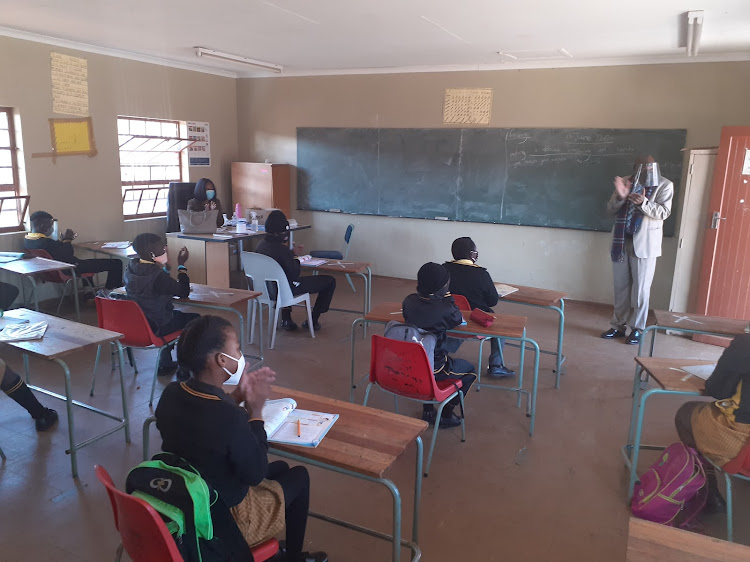 It was back to learning for Grade R and 6 pupils on their first day back at Thoho-Ya-Ndou primary school in Pretoria on Monday.
Image: Shonisani Tshikalange

Wearing their masks, some looking anxious and other sanguine as they listened to their teacher addressing them, it was back to school at Pretoria's Thoho-Ya-Ndou primary on the first day for grade R and 6 pupils after more than three months at home.

The school - which has no Covid-19 infections - has implemented its own learnings from the return of grade 7s about a month ago.

The principal of the school, Livhuwani Ramano, said it also offered children stricter safety protocols than were practised at some homes, as well as regular meals.

“We were bombarded with calls from parents who wanted to bring their children back because they are going back to work.

“It’s good to have our learners back today because when they are back at school they are able to use the school feeding scheme. Also, the grade R learners have nurses who will be checking them, so that is also beneficial for the learners. At home, some of them are not eating good nutritional food. In most cases when they are at home, we find them playing with no masks,” he said.

Ramano said the school was in the process of substituting three teachers who have “underlying issues”.

“I am glad that the Gauteng education department is allowing us to have substitutions for those who are unable to work. We don’t want teachers to be dying. We have only three teachers who we need to substitute,” he said.

Ramano said that since the first group of grade 7s came back to school in early June, the attendance has been above 90% every day.

“Teachers are giving positive feedback ... they are performing very well,” he said.

The acting deputy principal, Patrick Ramantswana, said the school has identified hotspots around the school that will be closely monitored to ensure social distancing among pupils.

“We had our doubts at first when we had to welcome back the first group on whether parents would bring their children, but they did and we are doing so well.

“We also arranged for our learners to eat inside the class so that we can monitor them. Before we reopened, we tried to put all the teachers at the hotspots of the school where learners might gather, at the taps, toilets and other spots, to maintain social distancing,” he said. 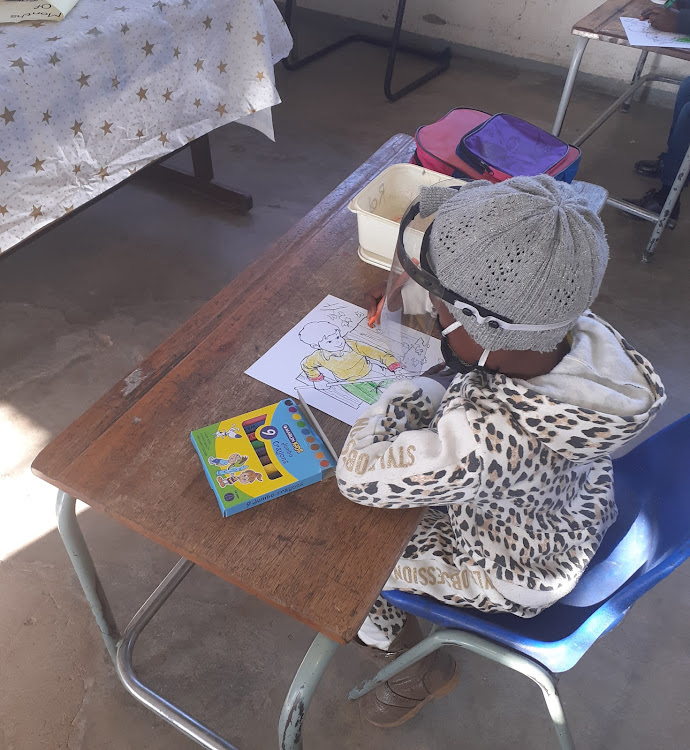 A grade R pupil at Thoho-Ya-Ndou primary school doing her work on the first day back at school after lockdown.
Image: Shonisani Tshikalange

The school was expecting 180 grade R pupils and 162 grade 6 pupils after welcoming its first group of grade 7s early in June. When TimesLIVE visited the school on Monday, however, it had only 12 grade R and 99 grade 6 pupils.

The principal said he had expected the low turnout as some parents had been confused. “At this point, because there was some sort of confusion, I am not expecting a 100% comeback rate today,” he said.

School governing body treasurer general Michael Radzilani said he was satisfied with how the school had been handling pupils and teachers.

“On behalf of the SGB, since they opened there haven't been any concerns. The school doesn’t even have any reported cases, so we are so happy.

“We welcome the two grades today and we are hopeful that more parents will bring back their children. My child also came back today and as a parent I was also worried, but after the assessments, I am happy with how the school is doing,” he said.

Ramano said the school was using a rotational timetable.

“For today it's only grade R and grade 6 learners, grade 7s are at home and will come back on Thursday and Friday. We have listened to the parents who wanted to bring back their children,” he said.

Hesitant return to school for three grades in Gauteng

On the first day of the return of the second cohort of pupils during the Covid-19 lockdown, mixed results were seen in grades R, 6 and 11 classes.
News
2 years ago

Why we are not sending our children back to school: parents explain fears

As the second cohort of pupils return to school on Monday morning, some parents said the safety of their children is just as import as education.
News
2 years ago

Basic education minister Angie Motshekga says the school nutrition programme has resumed for grade 12 and 7 pupils in all provinces.
News
2 years ago