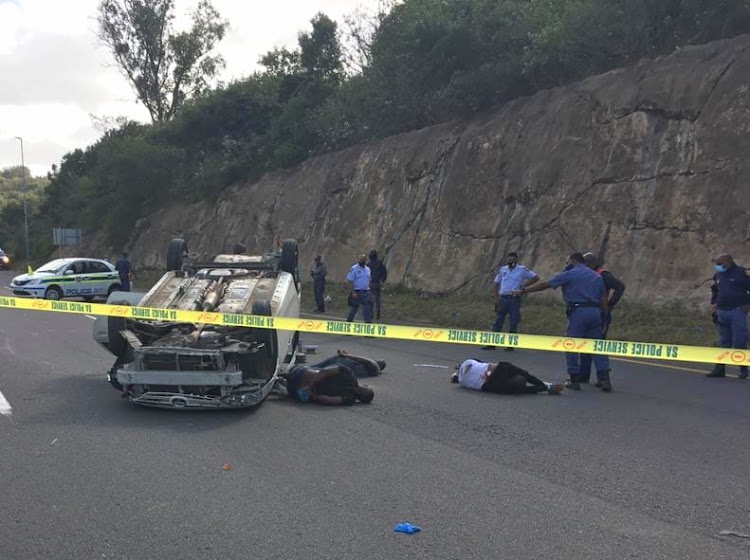 Three men were arrested following a high-speed chase with police in Durban on Tuesday. The driver lost control of the car on the M7, south of Durban
Image: Orrin Singh

Three men, believed to have committed a house robbery on Tuesday, have been arrested after a shoot-out with police on the M7 highway, south of Durban.

According to sources on scene, police received information about three men driving a white Toyota Etios who had committed a house robbery.

Three house robbers have been arrested on the M7 in Durban following a shootout with police. Sources on the scene say the robbers opened fire on police who retaliated. The driver lost control of the vehicle before it overturned. A portion of the M7 has been closed @TimesLIVE pic.twitter.com/jWdsUQb6N5

Police spotted the vehicle and a high-speed chase ensued. The wanted men are alleged to have opened fire on police, who retaliated. The driver lost control of the vehicle just before the N2 off-ramp and the vehicle overturned.

Members of the police and metro police cordoned off a portion of the M7 highway and the three alleged robbers were treated by paramedics before being arrested at the scene.

Police did not immediately respond to queries.

A man was shot dead during a shoot-out between suspected hijackers and security guards in Morningside, north of Johannesburg, on Wednesday, police ...
News
2 years ago

A shootout between police and robbers at Johannesburg's Cresta shopping centre has led to the arrest of two suspects.
News
2 years ago