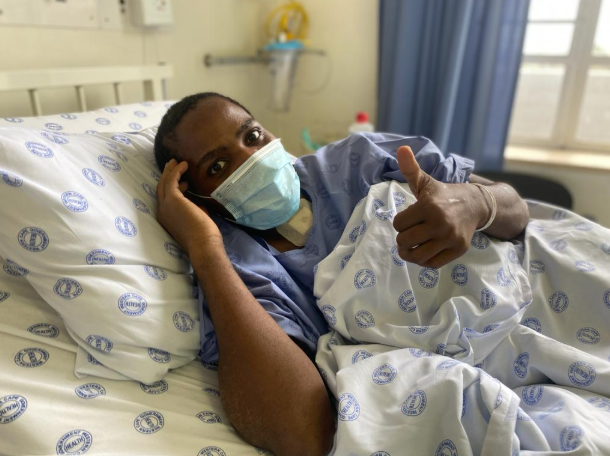 Robson Shaby has made a full recovery after three months in hospital while battling Covid-19.
Image: Supplied

For most Covid-19 positive patients, it usually takes 14 days to recover. However, for one Wynberg, Cape Town, patient, it took three months of treatment.

Among other things, his treatment included health professionals making a hole in his neck to help him breathe.

Robson Shaby, who is arguably the Covid-19 patient admitted to hospital for the longest time in the Western Cape, has now made a full recovery. His stay at the Victoria Hospital pushed medical staff to explore unknown medical territory to save his life.

He was admitted to the hospital in April because he was struggling to breathe. He was diagnosed with Covid pneumonia and was in a critical condition.

One of the first hospital medics to see Shaby was Dr Priya Arnad, the medical registrar.

“He was incredibly young. We all wanted to do our best for him, and we wanted to ensure  he returned home as a contributing member of society.  He had a big fighting spirit and that allowed the team to help him to come out of this,” Arnad said.

Doctors put him on a ventilator. During this time, he also underwent a tracheostomy, which required an incision being made in his neck for the insertion of a tube to help him breathe. He was given food through a feeding tube.

Dr Caryl Hollmann, head of the department of anaesthesia, said the maximum period for intubation was typically three to five days.  Shaby broke records by being the longest ventilated and intubated patient by undergoing this for almost four weeks.

“It was scary intubating someone my age. To put someone on a ventilator and consequently fear the unknown once he is on it was not easy.  There was limited data. We assumed the outcome would not be good, and at times I would think may be the last person he would see,” Hollman said.

She explained what motivated the medical team to try this method.

Hollman said she remembered thinking: “If we could just do it. If we could be that one unit in a small hospital that managed to intubate their first patient and get him through it. Our whole mindset was that it simply just had to happen.”

Another doctor detailed the anxiety around doing something that had not been done before, particularly on a Covid-19 patient.

Covid-19 is a a disease of two steps forward, three steps back.  It was a test of our patience and resilience

“There was so much we didn’t know.  It was extremely rocky. We are used to seeing patients of his age group bouncing back quickly, but for him it was a slow process,” said Dr Andy Heald, medical officer in anaesthesia.

He said there were lessons to be learnt from Shaby’s case.

“It has taught me  a lot about patience with this disease.  It taught me how this is very much a disease of two steps forward, three steps back, and when it feels like you are losing the battle, something good happens and you have hope again.

“It was a test of our patience and resilience. What I have noticed with subsequent patients in the high care unit who require high flow oxygen or ventilation is that it is evident we have learnt a lot from our time with Mr Shaby. We certainly are a lot better now in dealing with patients of this nature,” Heald said.

Heald said they learnt that patients can pull through, despite the odds being stacked against them.

Dr Nasief van der Schyff, who is the head of department of medicine, detailed another never-been-done procedure tried on Shaby shortly after he was admitted, namely high flow nasal oxygen therapy.

This procedure had been carried out by medics who dealt with children, but Victoria Hospital staff had never tried it on an adult patient. 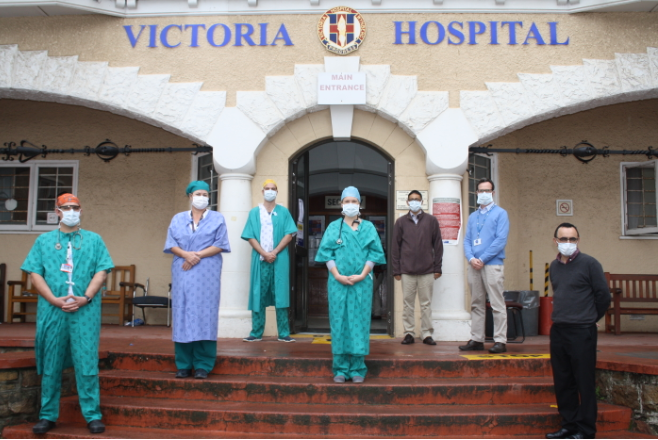 Some of the Victoria Hospital staff who treated their longest ventilated Covid-19 patient during his three-month stay.
Image: Supplied

“We knew Tygerberg Hospital had been successfully using high flow oxygen on this kind of patient” said Van der Schyff.

“We were a month into the pandemic and we had heard that the mortality from ventilation was poor. That’s when the decision was made to give it a try.”

Mr Shaby is one example of what is possible from this hospital.

The machine was set up, a tutorial was given and Shaby was soon connected to it.

Following the successful use of the machine, Van der Schyff said the pandemic has created firsts for the hospital and strengthened relations between the medical staff and hospital management.

He was optimistic about what the hospital could achieve.

“Several firsts in terms of what we have done, how we have done things, how we have tried to be innovative, how the relationship between management and staff has been the best ever.  Importantly the multi-disciplinary collaboration across the board.  It has required a whole hospital response. Mr Shaby is one example of what is possible in this hospital.”

With efforts from doctors and ICU staff,  physiotherapists and dieticians, Shaby was weaned off the machines and started speaking and eating on his own again,

On June 22, Shaby was moved to a general ward to continue with his treatment. Eight days later, he was discharged.

His positive outcome is a sign of how a hospital actually works. Our system does work.

Dr Clint Cupido highlighted all the medical hands that Shaby had passed through to eventually achieve his healing.

“To think that from the time he left his home, he would have encountered the ambulance crew involved, the staff in the emergency unit, the various shifts of nursing staff at the hospital, the daily cleaning staff, and many more. A case like this makes me realise how almost everyone in medicine and anaesthetics were involved at some point,” Cupido said.

“Ultimately these colleagues made a huge impression on his care. His positive outcome is a sign of how a hospital system actually works. Our system does work. We hope to see more patients with this positive outcome,” he said.

Now fully recovered, Shaby said he had no idea where he contracted the coronavirus.

He expressed his thanks to all the hospital staff who had played a role in saving his life.

“Firstly, I thank God for what happened, and then I thank the team at Victoria Hospital.  The doctors were amazing. They helped me a lot,” he was quoted as saying.

A sense of hope and faith pulled an asthmatic nurse out of ICU, where she was being treated for Covid-19 health complications.
News
2 years ago

Hospital CEO Jonathan Vaughn hailed his recovery as a milestone for the hospital, adding that they hoped Shaby was the first of many critically ill Covid-19 patients in the hospital who make full recoveries.

“This case has highlighted the spirit of Victoria” Vaughn said.

“What I am hearing and experiencing highlights the bond that exists between staff at Victoria. It was a huge collaborative effort among various staff members, and we wish to highlight this and thank our staff for their investment,” he said.

More than 2,500 people in Gauteng hospitals with Covid-19

Despite the rapidly growing number of cases, the Gauteng government says it has not asked the national government to allow it to introduce an ...
News
2 years ago

Health experts say Covid-19 pandemic not as bad as predicted in SA, but the worst is still to come

Many predicted Covid-19 would be catastrophic for SA by now. However, public health officials and doctors are now saying their earlier models were ...
News
2 years ago

Here are key milestones in the spread of the coronavirus pandemic in SA.
News
2 years ago