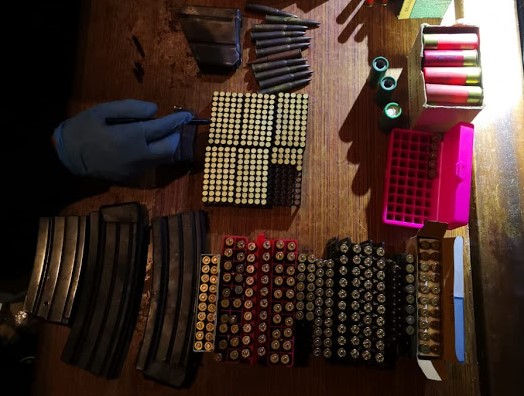 Some of the ammunition seized by Cape Town law enforcement officers at a house in Somerset West on July 8 2020.
Image: City of Cape Town

A 67-year-old man was arrested after Cape Town law-enforcement officers discovered a large cache of firearms, ammunition and explosives in Somerset West.

Mayoral committee member for safety and security JP Smith said members of the council's law-enforcement stabilisation unit received a tip-off that a resident of Briza Estate was in possession of a large number of firearms and ammunition.

“The officers visited the address and interviewed the suspect. The officers discovered 16 rifles, four pistols, a substantial amount of ammunition, 21 imitation firearms and explosive gunpowder. Other explosives were also found,” said Smith.

The council released photographs of the alleged cache showing mostly the imitation firearms. Law enforcement spokesperson Wayne Dyason said photos of the real firearms were being withheld at the request of police investigators.

A Mpumalanga man is under arrest after firing a fatal shot at his own mother when she tried to intervene during a heated argument he was engaged in.
News
2 years ago

Four poachers were arrested in KwaZulu-Natal after being found in possession of animal carcasses on Thursday.
News
2 years ago