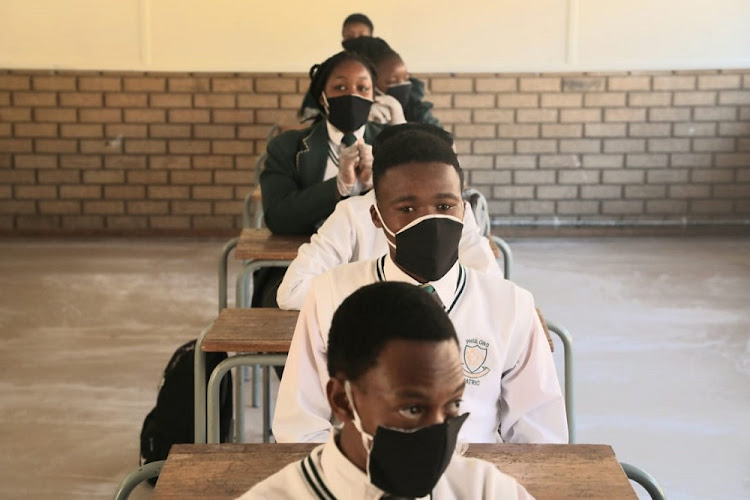 The SA Democratic Teachers Union (Sadtu) on Tuesday called on the government to close schools countrywide until after the Covid-19 pandemic has reached its peak.

The call was made following a special meeting of the union’s national executive committee to discuss the spread of the coronavirus at schools.

The union charged that there had not been efficient teaching or learning since the phased-in reopening of schools, citing low attendance figures.

“The rate of community transmissions is affecting schooling,” said the union's Mugwena Maluleke. “As an organisation we cannot continue to send messages of condolences to families.”

He said the suspension of classes during the pandemic peak would afford the department of education more time to implement alternative measures to allow for teaching and learning to take place.

The SA Democratic Teachers Union on Tuesday called on the government to close schools countrywide until after the Covid-19 pandemic has reached its ...
News
1 year ago

“The situation is dire and affects everyone in the community and not only schools because schools are a microcosm of society.”

Speaking to TimesLIVE, Sadtu said it was not yet considering taking the department to court over the matter, as many organisations had done so unsuccessfully.

“We are calling on the minister to respond to meeting requests very quickly,” said Sadtu deputy general secretary Nkosana Dolopi. “We are advising our members to stay at schools. Later this week we will engage them further on the programme of action."

While the union could not immediately provide statistics on the number of infections or fatalities which had hit the schooling community, it said it wanted to prevent them from happening in the future.

“We don’t want to lose any teacher, any pupil. Every life is important. We should try our best to save lives,” said Maluleke.

The Educators Union of SA has called on teachers and pupils to picket from Tuesday to pressure President Cyril Ramaphosa to close schools as the ...
News
1 year ago

If Motshekga heeds the union's call, he said, the union proposes that learning and teaching take place in the following ways:

The union called on different structures to refrain from using education as a platform to gain "cheap political points".

In a statement on Tuesday evening, the council of education ministers (CEM) made it clear that Sadtu had no power to dictate whether or not schools should be closed. The group issued a statement following a virtual meeting on​ Tuesday, in which it “noted the resolution by Sadtu" over the closure of schools.

“The decision on whether schools will be closed or not will be taken by cabinet,” said the council.

Their statement also came after the Congress of SA Students (Cosas) issued its own statement calling on teachers to boycott schools, vowing that it would disrupt schooling should the department of education forge ahead with re-opening schools for all learners.

“CEM has resolved to take legal action against all individuals and groups that continue to disrupt schooling,” the council warned.

“We would like to emphasise the fact that the reopening and closure of schools is a legislative responsibility accorded to national and provincial authorities only. Groups and individuals who are not empowered by law do not have the authority to close schools.”

The council stressed that section 51 of the Schools Act allowed parents to make their decisions for the children’s schooling, adding that among other things, options such as home schooling were in play.

It stressed that as the coronavirus was projected to remain in South Africa for a while, life – including schooling – had to be adjusted, but must continue.

“Schools and indeed the system are dealing with a completely new environment, and we need to afford the opportunity and space to gradually settle in dealing with the new normal of operating under Covid-19, in line with the risk-adjusted differentiated approach in reopening schools - otherwise schools may also become overwhelmed,” it said.

The council said it made weekly evaluations of the situation and continued to have the best interests of pupils and teachers at heart.

It stressed that during level 5 and 4 of the lockdown, pupils from poor, underdeveloped areas suffered the most as there were no options of online learning for them.

“This inadvertently negatively affected these children’s unfettered right to basic education. It is particularly the poor who continue to be at risk if schools do not reopen.”

Critical in the phased reopening of schools was adherence to the health, safety and social distancing protocols as determined by the department of health, it said.

The uncertain school calendar and social isolation has left many parents and children struggling to cope with an academic year that may or may not ...
Books
1 year ago

It expressed concern at teachers, principals  and other department of education staff who continued to publicly oppose the government and education ministry for reopening schools.

“The government is extremely concerned about teachers, principals [and] non-teaching staff who use any platform to attack government for going back to work, ostensibly creating an impression that they should be treated differently from the rest of the other public servants.”

The council expressed confidence in the way that schooling was currently being carried out, adding that on average, attendance of pupils at schools stood at around 80%.

“[This is] much better than most of the countries of the world,” it said.

It stressed that talks continued on how best the phased reopening of schools could be maintained. “At the appropriate moment cabinet will take a decision on the matter.”

Cosas on Tuesday called for only grade 7 and 12 pupils to ​continue with the school year. This, however, would not mean a total loss of the school year for the other grades.

“We are calling for all grade 7s and 12s to be tested and sent to educational campsites within the ranks of their provinces to complete their academic year,” it said in a statement

“All other grades should not go back to school in 2020,” it said, adding that a "pass one, pass all" policy should be applied.

Cosas, which has been at the forefront of calls for the closure of schools, threatened to continue disruptions. It backed the Sadtu call for the school year to be suspended, and called on teachers to boycott schooling.

Cosas said it wanted “to save the academic year but not at the expense of the lives of our members".

Angie Motshekga's team to take on those 'hellbent on disrupting schools'