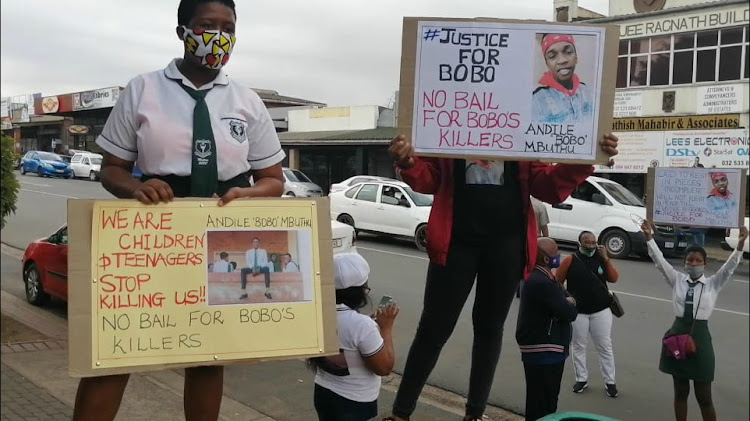 Schoolmates of Andile 'Bobo' Mbuthu gathered outside the Verulam magistrate's court on Tuesday where the six men accused of his murder were set to appear. The matter was postponed after the court was shut down because some officials had Covid-19.
Image: Lwandile Bhengu

The family of slain Tongaat teen Andile Mbuthu are disappointed after the bail application of the six men accused of his murder was again postponed because of Covid-19.

The family did not even make it inside the courthouse when a court official on Tuesday told about 50 people waiting outside that it was closed because staff had tested positive for Covid-19. The matter had been set down for judgment on the bail applications.

“It is not safe for you inside. The court and the one across the street [Verulam family court] has been closed,” said the official.

Sources inside the court said that court orderlies from one floor in the building had tested positive.

“We as a family feel very disappointed because this matter has been postponed for such a long period and it’s still in the process of bail but there is nothing we can do because of this Covid-19. So we will wait for another date and we need to be patient even though it hurts,” said Mbuthu's uncle, Ntobeko Ngidi.

Nomonde Khuzwayo says she and other schoolmates owe it to their friend Andile 'Bobo' Mbuthu to come to court and support Mbuthu's family. The matter has been postponed to next week. @TimesLIVE @yasantha #JusticeForBobo pic.twitter.com/7OzffnhgDc

The case has been delayed several times by the pandemic, initially because the accused could not be transported to court from Westville prison due to lockdown restrictions, and later because the magistrate, an orderly and a senior state prosecutor had all tested positive for Covid-19.

Mbuthu’s schoolmates, in uniform, arrived to support the family on Tuesday.

“What happened to our friend was very bad and we are here to support the family. I think I owe it to him to come here and support his family,” said schoolmate Nomende Khuzwayo.

Mlungisi Thabathe, together with Andile Nhleko, 27, Mncedisi Mzobe, 27, Siyanda Msweli, 26, Lindani Ndlovu, 22, and Malusi Mthembu, 27, are charged with murdering and kidnapping Mbuthu, who disappeared after he was assaulted, allegedly for stealing alcohol from a tavern in Hambanathi in Tongaat, north of Durban.

The seventh suspect in the matter, a minor, previously abandoned his bail application and appears separately from the other accused.

The matter will be back in court on July 22.

The maternal family of slain Tongaat teen Andile "Bobo" Mbuthu said they have nothing to say to Mlungisi Thabathe, one of the six people accused of ...
News
2 years ago

A KwaZulu-Natal priest has been shot dead outside a church in Tongaat, north of Durban.
News
2 years ago

Family and friends of Andile “Bobo” Mbuthu were left reeling in the Verulam magistrate’s court on Thursday when they heard that his body may have ...
News
2 years ago