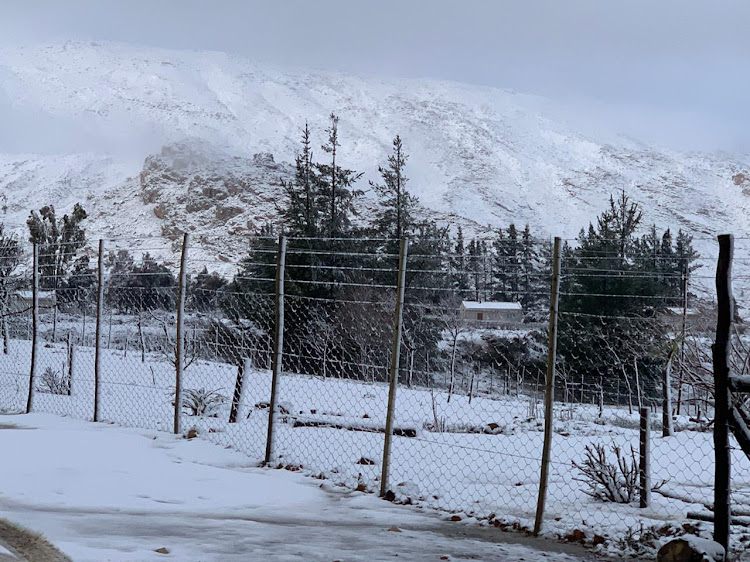 Snowfalls were experienced in some parts of the country early on Tuesday as temperatures continue to drop, the SA Weather Service said.

Forecaster Tokelo Chiloane said temperatures dropped below zero in some parts of the country on Tuesday morning.

Light snowfalls were expected over the mountain areas in the Western Cape, Eastern Cape and Northern Cape, she added.

There is also a 60% probability of rainfall in the Western Cape.

In addition, Chiloane said high seas to very high seas with wave heights between 6m and 10m can be expected between Lambert’s Bay and Durban.

The weather service has issued advisories of a storm surge expected along the coast between Mossel Bay and Cape St Francis.

“High to very high seas will continue along the coast of the Western and Eastern Cape provinces today spreading to the south coast of KZN this afternoon.

“Gale-force winds (65-75km/h) are expected along the coast between Mossel Bay and Coffee Bay today,” it added.

The cold front moved to the central and eastern parts of SA on Tuesday including Gauteng, the Free State, Eastern Cape, North West, KwaZulu-Natal and highveld of Mpumalanga. Temperatures are expected to be in the low teens.

Johannesburg's temperatures were forecast as 1-11 °C for Tuesday, according to the weather service. Some forecasters are predicting the temperature in the city will drop to minus zero overnight before warming up from Friday.

Meanwhile, the rolling cold fronts in the Western Cape have brought welcome rain to the recently parched region.

“Just three weeks ago, dam levels were at 58.8% and though rainfall has been inconsistent during this period, a handful of significant storm events have done some heavy lifting for our stored water supplies,” said mayoral committee member for water and waste Xanthea Limberg.

Frosty mornings and daytime temperatures in the lower teens are in store for you till Thursday. pic.twitter.com/BhiY0UEA3S

Gale-force winds wreaked havoc, downing trees and tearing off roofs as a powerful storm made landfall overnight, bringing rain and snow to the ...
News
1 year ago

For years, homeowners in St Francis enjoyed the sight of waves smashing onto the beach. They didn't expect them to smash right through the beach, as ...
News
1 year ago