Women are facing a double disadvantage due to job losses during the lockdown, and black women are affected the most.

This is according to a survey conducted by 30 researchers from five SA universities, which revealed that about two million women lost their jobs between February and April.

The National Income Dynamics Study (NIDS) Coronavirus Rapid Mobile Survey (CRAM) found that most of the women who lost their jobs during this period were already “disadvantaged” black women.

The survey, according to the study, was conducted through a 20-minute telephone interview with respondents on socio-economic issues.

It also found that two out of three respondents who experienced job losses or furloughs (an employment relationship but no income) were women.

The results of the survey were released on Wednesday.

“Of the approximately three million net job losses between February and April, women accounted for two million, or two-thirds of the total, even though in February they only accounted for less than half of the workforce (47%)," said the researchers.

“Of those women who were employed in both February and April, almost half of them reported working fewer or no hours in April (compared to 42% of men).”

The survey suggested that the Covid-19 pandemic, over the first few months, had a major impact on employment figures for women nationally.

“Among those groups of people that were already disadvantaged in the labour market, and already faced a disproportionate share of job losses from the pandemic (the less educated, the poor, Black Africans and informal workers), women in these groups faced even further job losses putting them at a ‘double disadvantage'.”

The survey also said significant numbers of the newly unemployed are in households with no grants.

“Many of those who experience job losses are in grant-receiving households, for example, child support grant or an old-age pension, but there are also a substantial portion of people who live in households where there is no grant income.

“Approximately 30% of those who were retrenched between February and April report no household-level grant protection at all,” said the researchers. 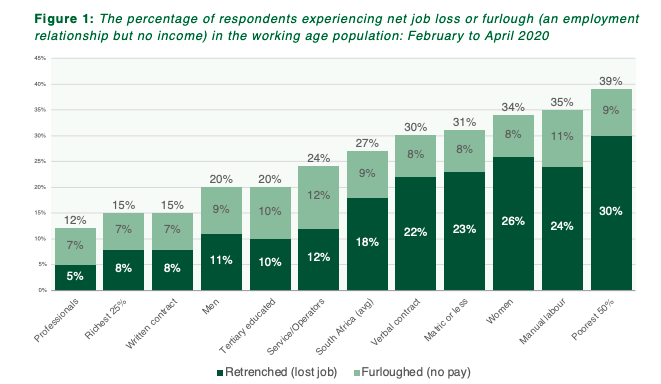 The percentage of respondents experiencing net job loss or furlough (an employment relationship but no income) in the working age population: February to April 2020
Image: Screenshot

The researchers said April was seen as the peak for the Covid-19 lockdown and many industries were restricted from working and forced to close down after the government implemented a hard lockdown, level 5.

The data for the Wave 1 report, the researchers said, was collected during the rollout of the government’s Covid-19 social relief grant.

The researchers also acknowledged that “much of the government relief that has subsequently been implemented had not been fully realised at the time of the survey”.

“It was also before much of the economy reopened in early June,” said the researchers.

“The subsequent four waves of NIDS-CRAM (Wave 2-5) will continue to report on employment and grant receipt for these same individuals over the period June-December 2020.

“As a result, the panel nature of the study will be able to assess the labour-market dynamics in the lockdown and post-lockdown period, as well as measure the household welfare impacts of new employment and receipt of the new government relief grants.”

According to the Stats SA Quarterly Labour Force Survey, the number of employed people decreased by 38,000 to 16.4 million and the number unemployed increased by 344,000 to 7.1 million in the first quarter.

The largest employment decreases were in the formal sector (50,000), followed by the agricultural sector with 21,000.

The government is considering introducing a universal basic income grant for unemployed South Africans between the ages of 18 and 59.
Politics
1 year ago

More than R1.2bn has been paid to over 3 million unemployed South Africans who qualify for the special Covid-19 social relief of distress grant.
Politics
1 year ago