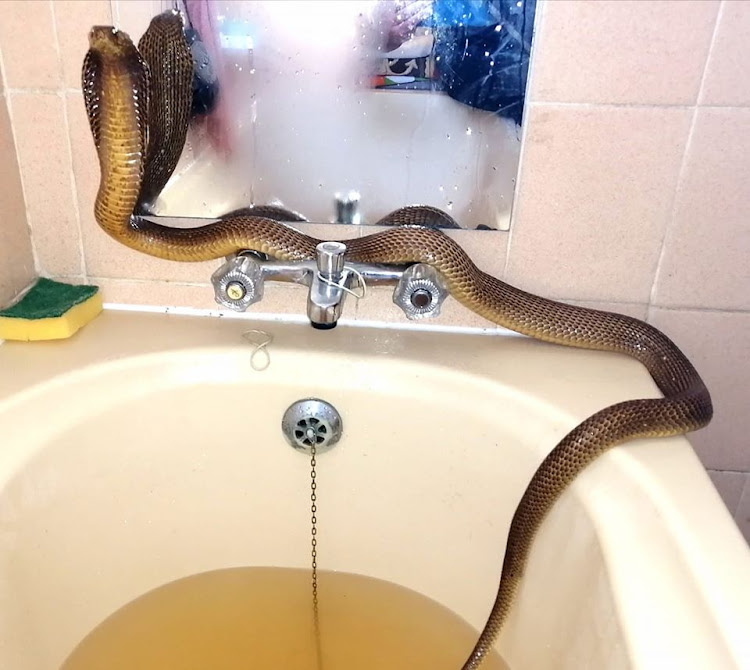 Snakes often hibernate in the Boland town of Worcester at this time of year when the mountains are snow-capped but this "incredibly cold" 1.8m long Cape cobra was treated to a nice warm bath in a house.

Worcester snake catcher André du Preez posted a video of the snake splashing around in his bathtub after he rescued it from a construction site in the town this week.

Du Preez said his car was in for a service, so after he was called by distressed construction workers who found the creature, he wasted no time getting onto a motorbike, wearing a backpack to put the snake into.

“When I got home, I realised the she was incredibly cold, and being too cold isn’t good for snakes. Then I poured her a nice warm bath. They pick up heat through their skin, and I also pour salt in the bath sometimes, it’s almost like a drip for people,” said Du Preez.

Du Preez said after a while he went back into the bathroom and captured the snake on camera splashing around in the water and very much alive.

Then I had a cobra on a Cobra faucet

“After that, when I opened the door again she was up and down all over the place. Then I had a cobra on a Cobra faucet,” he said.

He said he was called out again on Friday by the same construction crew to save another 1.7m long snake.

“In about six months in Worcester I get about 300 callouts of which I catch about 260 snakes,” he said.

“It’s not my job. I do it as a service to the community. I do it without cost and the only money I get is from donations,” said Du Preez.

He said the cobra would "stay with him" through the winter until she eats her first meal, and once he has checked her health, she would be released on a nearby farm.

“I have a whole network of farmers here where I go and drop off the snakes. But only after I’ve done snake awareness with their workers, otherwise you leave it ... and people kill it,” he said.

An Eastern Cape businessman is in ICU at a Port Elizabeth hospital after being bitten by a Cape Cobra at his office.
News
2 years ago

He said snakes tended to go to towns because of dirty homes which attracted rodents and other pests. “The snakes go to the town because the people leave their places dirty. It attracts mice and rats. If you create a McDonalds for a snake, they will come,” he said.

He said the snakes released on nearby farms were excellent pest eradicators and, along with owls, had helped farmers deal with a mouse infestation in Rawsonville.

“Snakes are very good for pest control. A brown house snake will go into a mouse nest and eat up the entire nest,” he said. “There is a farm outside Rawsonville where I’ve been leaving snakes for about four years. We’ve had quite a mouse infestation in the Rawsonville district for the past couple of years. The places where I leave snakes have much fewer problems,” he added.

“This farmer has a feed store and when you opened the doors it was a manifestation of rats and mice. Now a cat can only catch so much. Then we started leaving non-venomous snakes with him like brown house snakes and that solved the problem along with owls. I also put up owl boxes for him,” he said.

“The snake goes into the holes of moles and rats and mice, and when it goes in, they scurry out only to be caught by the owls. We cover both sides,” said Du Preez.

WATCH | Lizard takes on snake in nail-biting battle for survival

This western yellow-bellied sand snake was in for a nasty surprise!
Lifestyle
2 years ago

A good news lockdown story: The pythons have been released into the wild.
News
2 years ago

The Crocworld Conservation Centre removed a black mamba from a storeroom at Amahlongwa community on the KwaZulu-Natal south coast on Sunday.
News
2 years ago