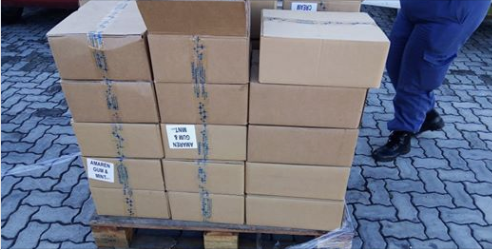 Eastern Cape police confiscated liquid tobacco with a street value of about R360,000 after being alerted by a courier company about a suspicious package at their warehouse at Kabega Park in Port Elizabeth.

Police said the company had received a package from Cape Town on Thursday afternoon, adding that a similar package had been received from the same person earlier in the week and that the suspicious behaviour of the recipient had caught the attention of the company.

“When another package arrived [on Thursday] for the same person, police were roped in to investigate. The package was opened and 30 boxes each containing 120 packets of various flavours of oka pipe liquid tobacco were confiscated. The total street value is R180,000.

“At about 5.30, the same evening, police returned to the company as another package arrived. Another 30 boxes of the same liquid tobacco were confiscated. The total value of both confiscations is R360,000,” police said.

A tobacco association says there is no evidence that the ban on the sale of tobacco products alleviates the burden on the health-care system.
News
2 years ago

'It could be old stock': Tobacco firms deny they're behind illegal cigarette sales

The government’s seeming inability to stem the flow of cigarettes onto SA’s streets has raised questions of when, or if, the long arm of the law will ...
News
2 years ago

Caught buying, selling cigarettes? You will get a criminal record: Bheki Cele

Police minister Bheki Cele says those caught buying or selling cigarettes will be prosecuted and, if found guilty, would have a criminal record
Politics
2 years ago