Inside one of the prefab structures built to house some of Cape Town's homeless.
Image: City of Cape Town

Substance abuse interventions, strengthening family ties, and job and work readiness are some of the programmes and services which will be offered to street people at Cape Town’s new “safe space”.

The Culemborg expansion site was opened under the FW de Klerk Boulevard freeway bridge earlier this month. It will offer a place for 96 people, according to mayoral committee member for community services and health Zahid Badroodien.

The site will be operated by an external service provider. Badroodien said residents who chose to live there would have to adhere to strict rules. For example, the service providers would not let people into the facility if there was a “suspicion of intoxication”.

Badroodien said the residents also needed to show willingness to engage in city programmes, whether it be rehabilitation, psycho-social care or personal development.

“Our safe spaces are not traditional shelters; they are transitional facilities for persons who have expressed a willingness to accept assistance. They also help alleviate the pressure on existing shelters - particularly during the colder months when more people seek shelter,” said Badroodien.

“We are therefore extremely pleased that we have been able to open our third safe space.

“With these spaces and the services that are available to the occupants, the city, through its service providers, hopes to embark on a journey with every individual that will get them to a point where they can access grants or employment opportunities, and find their way to an existing home or a new one.” 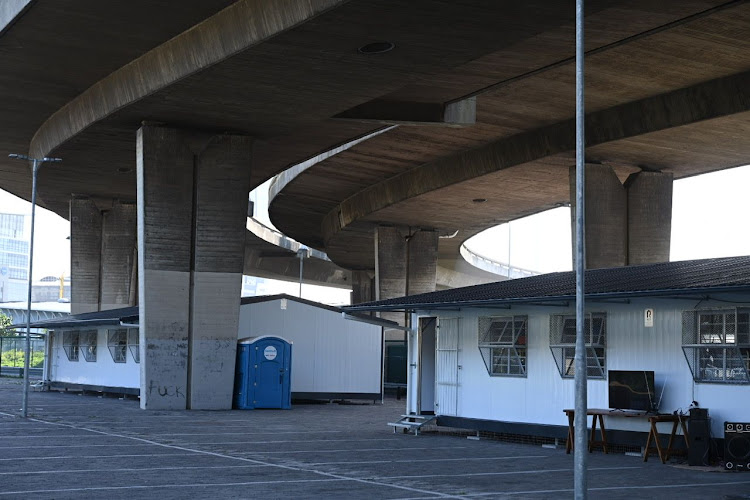 He said the site took on 96 individuals, as per a court order which emanated from a case relating to the Strandfontein homeless action committee.

The facility is next to the first safe space, which was opened to street people in 2018. The Culemborg expansion site is the third safe space, after another one was opened at Paint City in Bellville a few months ago.

Solomon dragged his broken wet tent behind him after a brutal storm hit Cape Town in the early hours of Monday morning.
News
1 year ago

The city said the three sites will collectively be able to accommodate nearly 700 people under normal conditions, but with social distancing measures they house only 360.

The current living quarters consist of prefab structures that each accommodate 24 people. There are also ablution facilities with portable toilets and water storage tanks being used while the city connects sewage and water infrastructure to the site.

“Other interventions that are in the pipeline include the expansion of existing shelter spaces through the placement of prefabricated structures on city-owned land adjacent to the shelters, to increase the number of people who can be accommodated.

“We are also working on a process to update our street-people policy, which has been in place for the past seven years, with the aim of devising a strategy for how the city addresses the issue, and effecting meaningful change in the lives of those who find themselves on the street.

“We will be undertaking a series of dialogues with the street-people sector in the coming months to help inform the strategy.”

Layers of Bulelani Qolani's dignity have been steadily stripped away since he was born 28 years ago.
News
2 years ago

The City of Cape Town broke the law when it demolished a shack at the height of the Covid-19 pandemic, judge Gayaat Salie-Hlophe ruled on Wednesday.
News
1 year ago

The ANC caucus in Cape Town has called on the city to appoint a retired judge to investigate the ejection of a naked man from a shack in Khayelitsha ...
Politics
1 year ago