Two years after landmark silicosis settlement, no-one has been paid 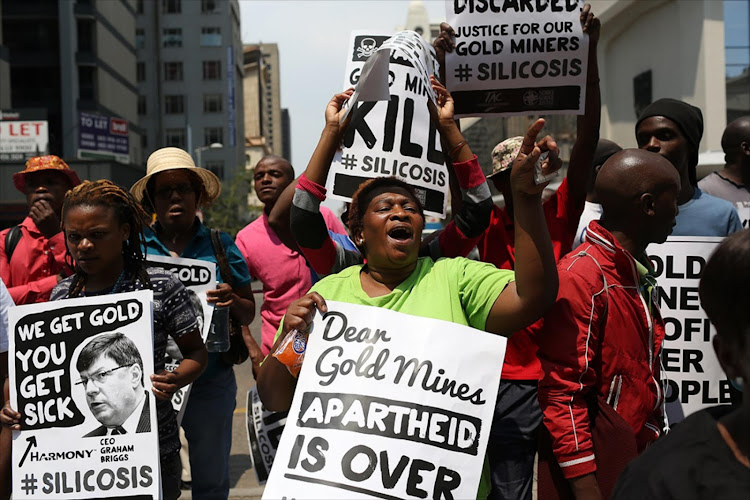 Protesters voice their opinions outside the high court in Johannesburg during the case between gold mining companies and miners who contracted silicosis and TB. An agreement between mineworker representatives and some gold mining companies to compensate these workers was made an order of the court.
Image: ALON SKUY

An advocacy group for ex-miners who suffered debilitating lung impairment while working on SA’s mines has expressed concern at the slow progress of the trust that is responsible for compensating affected miners.

On July 10, the Justice for Miners Campaign (J4M), which was formed to lobby for miners and ex-miners that contracted either or both silicosis and tuberculosis while working in SA’s gold mines, published a statement of concern about the current state of operation of the Tshiamiso Trust.

The trust was formed after a R5bn settlement in a 2018 class action lawsuit. J4M believes that up to 500,000 ex-miners may qualify for compensation administered by the trust.

GroundUp reported that J4M contends that the trust is moving too slowly in its formation and operations. To date, no ex-miner party to the settlement has received any compensation from the trust. J4M says the suspension of the lung function tests due to Covid-19 — a measure that is required for an ex-miner to qualify for compensation — will cause “huge delays” in the compensation process.

J4M has proposed that the trust open offices and make use of the paralegals and organisations that were involved in the class-action suit. These organisations have access to scanners, internet and data required to make the system work. They can also double as check points for medical examinations needed to apply for compensation.

In response, the Tshiamiso Trust has defended its progress, saying that while the settlement was made public two years ago, the terms were reached only in late 2019, and that Covid-19 has hampered its ability to discharge its duties. The task of administering the trust requires setting up complex systems, which cannot be rushed.

The trust says the pilot phase of the compensation process began in late June 2020, and focuses on ex-miners with second-stage silicosis. These miners have existing medical records confirming their lung impairment.

Gold miners in SA have been at risk for silicosis, a condition affecting the lungs that develops from exposure to quartz dust, and work-related tuberculosis, which spreads rapidly in the close confines of mines. These lung diseases individually and together can lead to a person suffering impaired breathing, and often early death.

In May 2018, a landmark settlement was reached: R5bn to be paid out over 13 years. Six mining companies are party to the agreement: African Rainbow Minerals, Anglo American, AngloGold Ashanti, Gold Fields, Harmony and Sibanye-Stillwater. In terms of the settlement agreement, miners who worked at mines operated by one of the six companies between March 12 1965 and December 10 2019 are potentially eligible for compensation. The compensation for qualifying miners largely depends on the level of lung impairment suffered by the ex-miner or the results of a post-mortem lung inspection.

The Tshiamiso Trust was set up in terms of the settlement, with a mandate to ensure that those who have silicosis or work-related tuberculosis are compensated.

Many ex-miners were brought to work on the mines from countries neighbouring SA, and after their tenures on the mines returned to these countries, often to rural villages.

Justice For Miners operates in Lesotho, Eswatini and Mozambique. The organisation is forming chapters in Eastern Cape, Welkom and Botswana. A spokesperson for the organisation told GroundUp that it is also in contact with ex-miners in Zimbabwe, Malawi and Namibia.

The trust has access to employment records of miners who worked at mines run by the six companies.

R5bn silicosis and TB settlement becomes order of the court

Thousands of mineworkers will finally receive compensation for contracting tuberculosis and silicosis from a number of gold mines they worked for ...
News
2 years ago

Why has it taken so long?

Chair of the Tshiamiso Trust, Prof May Hermanus, told GroundUp that they “fully understand the impatience among prospective beneficiaries, more so since the settlement agreement was made public on May 3 2018”.

The main delay, according to Hermanus, is that the agreement only became effective on December 10 2019. The trust was only formally registered in February.

Hermanus said the process of “setting up of the structures of the trust, and the drafting of the policies, procedures and processes, including the recruitment process of staff and service providers is a huge task. In addition, the database which informs the trust work involves amalgamating data from multiple sources. The systems that support the claims process are very complex and detailed with a number of checks and balances.”

J4M has drawn attention to the slow rate at which the trust has been staffed permanently. The trust is using an interim management team with experience in other similar structures. GroundUp was told that the trust is filling four senior posts from more than 600 applications received.

Hermanus defended the slow progress by emphasising that it was not two years, but rather five months that the trust has been able to operate: “While it may appear that nearly five months is a long time for us to have taken to reach this point, not only has the trust had to undertake much of its work during the Covid-19 pandemic ... but it is essential that the trust’s systems are well-considered, effective and reliable.”

Hermanus told GroundUp that more than 100,000 people have indicated that they intend to submit claims.

While the pilot phase has begun, as yet, no claimants have been paid.

Upon the onset of the Covid-19 crisis, the trust suspended the use of lung function tests — or spirometry — because of the heightened risk of Covid-19 transmission. Lung function tests are used to assess the damage to a person’s lungs, and in the case of ex-miners under the settlement, are used to determine the level of compensation that they may receive.

The trust’s decision is contentious, but in line with the advice of the South African Thoracic Society (“the representative society for pulmonologists, paediatric pulmonologists, cardiothoracic surgeons and respiratory therapists in SA”), which on April 22 recommended that no lung function tests be conducted during Covid-19. This decision was made to “minimise aerosolization procedures that may contribute to the spread of the coronavirus”.

Dr Rodney Ehrlich, who has been closely involved with the silicosis case as a medical consultant, said while he agreed with the decision to suspend spirometry, this did put the trust in a bind. Lung assessment requires a person to empty their lungs into a machine. Many people will use the same machine over the course of a day.

Ehrlich said that there were other possible assessments available, but that these had major shortcomings. To begin with, medical assessments require face-to-face contact between the assessing doctor and the patient, which is dangerous during Covid-19. Ehrlich said that lung X-rays were not a sufficiently reliable test of silicosis or tuberculosis damage. Some ex-miners might show minor damage in the x-ray, but have great difficulty breathing, while others with apparent major damage experience little impairment. Another possible option, the general medical examination, also requires face-to-face contact, and while a doctor might be able to identify sickness in the patient, their assessment may be insufficiently objective to satisfy the terms of the settlement agreement.

Faced with this impasse, Ehrlich said the most reasonable approach might be one which focuses on an ex-miner’s medical history.

Who the trust prioritises

Hermanus said that the trust is focusing its efforts on targeting ex-miners with second degree silicosis during the pilot programme, in part due to the Covid crisis. These ex-miners will already have MBOD certification, which circumvents the need to use lung function tests. Hermanus said that the trust believes that this approach is best in the current climate, “because, firstly, these are the individuals who would be most ill and, secondly, because they will receive the highest level of benefit”.

Justice for Miners raised a further concern about ex-miners that may die during the Covid-19 pandemic.

“When a miner dies of Covid-19, their families will not be eligible for payouts as they have not been informed that they can send the lungs of their family members for autopsy – a critical point in deciding on compensation.”

In many mining towns, according to Ehrlich, there is a general understanding among the ex-miners and their families that when an ex-miner dies, the medical examiner in the town will be instructed to remove the heart and lungs from the body, place the organs in formalin, and send the organs to the National Institute for Occupational Health in Johannesburg, where they will be inspected by the Lung Autopsy Examination Services. These inspections then may be used in the compensation process for the affected families.

However, many ex-miners are not resident in mining towns. In rural villages, access to medical examiners is limited, and knowledge of the post-mortem examination process is less widespread than in mining centres. If an ex-miner dies outside SA, their families face a further barrier if they try to send the organs of deceased relations across borders to the Johannesburg centre.

Hermanus expressed a similar concern and told GroundUp that “much more has to be organised with regards to pathology services and the transport of cardiorespiratory organs especially in neighbouring countries”.

Communicating with ex-miners is the responsibility of the trust. According to Hermanus, the trust has set up digital platforms, a toll-free call centre, and a “please call me” facility. Hermanus also said the trust has meetings with ex-mineworker organisations and other interested NGOs, trade unions and the Minerals Council.

“It is hoped that by keeping these bodies informed the correct information will filter down to members who might form part of the trust’s beneficiaries.”

Mine deaths fall to 51, lowest in a century, says Minerals Council

Mine death toll  was 51 in 2019, down from 81 the previous year and the lowest since records began a century ago, the Minerals Council, which ...
Business Times
1 year ago

Long before it became Africa's wealthiest city, Egoli was a dusty den of drunken debauchery
Lifestyle
1 year ago