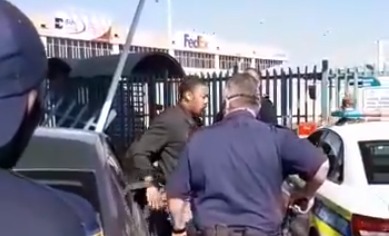 Police surround the crashed vehicle of a civillian who was wounded during the airport shootout.
Image: Screengrab

The mother of a man who was shot in the head during a gun battle between police and suspects at OR Tambo International Airport is still distraught that he was treated as a suspect.

She said the 26-year-old drove into the Johannesburg airport on an errand and was “caught in the crossfire”.

“I thought it was an accidental shooting, but when I saw a guy bashing the window while my son was bleeding, how he spoke to him, telling him to 'get out', I lost it. I couldn’t sleep,” said *Puleng.

She was referring to a video circulating after the incident showing officers surrounding the car after her son *Kagiso was shot, lost control of the vehicle and crashed.

In the video, police officers surrounded the vehicle with their guns drawn and ordered the driver out after breaking a window.

Seemingly disorientated, a man stumbles out with blood oozing from the side of his head. He is then ordered to his get on his knees.

Puleng said she had been wracked with guilt because her son was running an errand for her when he was shot. He was heading to the cargo section of the airport, intending to courier a package to London.

She said the car windows were not tinted and police could have seen he was injured and unarmed.

“Was there no other way they could have done it? Could they not see this man is helpless? By doing that [breaking the window], Kagiso got more injuries in his ears and eyes as he was cut by the glass,” said Puleng.

“My heart is pained. Its painful seeing your child like that, and it's the same for my daughter,” she said.

He is always a caring guy who is very quiet

Mother whose son was "shot in the crossfire" at the airport

“When I was given his jacket at the hospital, it was torn as though he had been in a scuffle,” she said.

Scores of people sent the footage to Puleng, saying her son was perceived to be a criminal, which she denied.

“Everyone will tell you there is no trouble from Kagiso. He is always a caring guy who is very quiet and always at home. He is into IT and is always willing to help people, even with devices. If he is not at home, he is at work. Since the coronavirus, he barely even goes out,” said Puleng.

Recalling how things unfolded on Saturday, Puleng, who works at the airport, said she was at home growing increasingly concerned that her son, who had been updating her of his whereabouts, had not returned and had stopped calling.

“I then got a call from one of my colleagues at the airport, asking me where I am. I told them I am home. They asked where my car is and I told them my son had it and that I had sent him to cargo,” Puleng said.

The colleague then ended the call.

Puleng continued to call her son’s phone and eventually it was answered by a police officer who said he was “among the suspects” involved in a robbery at the airport. She was told to come to the scene.

When she arrived at the airport, the site was cordoned off as a crime scene.

She eventually traced her son to the nearby Arwyp Private Hospital. He was conscious but injured.

“He could only open his eyes a bit and said ‘mommy, mommy’ as he tried to lift his hand. I held him, thinking my son is dying. He was bleeding through the nose and mouth,” she said.

Puleng said a bullet remains lodged in her son's head.

She said a police officer was sent to guard her son in hospital on Saturday.

On Sunday, her damaged car, with a bullet hole and shattered glass, was returned to her.

She is now seeking justice for her son.

Two other suspects were killed during the shoot-out at the airport.

Seven in court for failed OR Tambo airport PPE heist

The seven men who were arrested following a botched heist at the OR Tambo International Airport appeared in the Kempton Park magistrate’s court on ...
News
1 year ago

Police said they were unaware there was a case being pursued against them regarding the shooting.

“I have heard nothing from the investigating officer that the police are responsible for anything,” said spokesperson Col Brenda Muridili.

She confirmed that a civilian was injured and said an investigation would determine if the bullet came from a police firearm or that of a suspect.

“People have to be interviewed. There is a whole lot of investigation that needs to be conducted. It can then be determined who started firing where and shot at who, which firearms were used and by who,” she said.

“I can confirm this matter has been reported to Ipid. As mandated by section 28 (1) (b) of the Ipid Act, death as a result of police action will be investigated,” said spokesperson Ndileka Cola.

“The investigation is inclusive of the civilian [who was injured]," she said.

* TimesLIVE has changed the names to protect the identity of the family.

After Khosa's death, our army has gone mysteriously missing

Where have all the soldiers gone? It's a question that needs to be addressed.
Opinion & Analysis
1 year ago

'In SA there is no police brutality': Cele slams ANC over Black Friday campaign