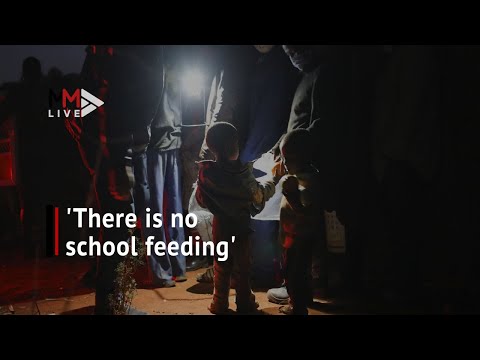 "We almost have an entire generation that is lethargic and has brain development issues, physical developmental issues and psychological issues," said Dr J André Hattingh, who is the founder of Paediatric Care Africa.

"You are what you eat, and if you don't eat, you are not. That is a fact," Hattingh said.

During lockdown, Hattingh has been feeding 2,000 children living between Mbombela and Bushbuckridge. Before lockdown the NGO fed 350 children.

Hattingh said hunger levels had increased because of the closure of schools.

“I don’t know if the [basic education] department will start feeding the children on July 27. Until then we will feed the children."

There are many people in White River, Mpumalanga, who rely on Hattingh's food deliveries.

One person who relies on the food provided by Hattingh is Shirley Sanderson, who uses her pension money to look after her children and grandchildren.

Anderson broke down in tears while talking to TimesLIVE about her situation.

“We have had to ration what we have. Sometimes we have to split the food because it’s just not enough. Some eat one day and the others eat the next day,” she said.

She said without the doctor's food deliveries, she and her family members would not  survive.

Another family the doctor helps keep afloat is David Fritz and his children.

Fritz told TimesLIVE he is not able to work during lockdown because he is employed in the service industry, and said the food donations and parcels have been keeping him and his family going.

Fritz said since schools have been closed and food parcels are no longer handed out, his biggest shock was to witness how much his children eat.

He said there are times during the month when food is scarce, but they always make it through because he cuts down his own food intake to make sure that his children have enough.

Section 27 and the Equal Education Law Centre have approached the courts on behalf of pupils, parents, teachers and school governing bodies to force government to feed millions of children who have gone hungry since schools were closed during the Covid-19 lockdown.