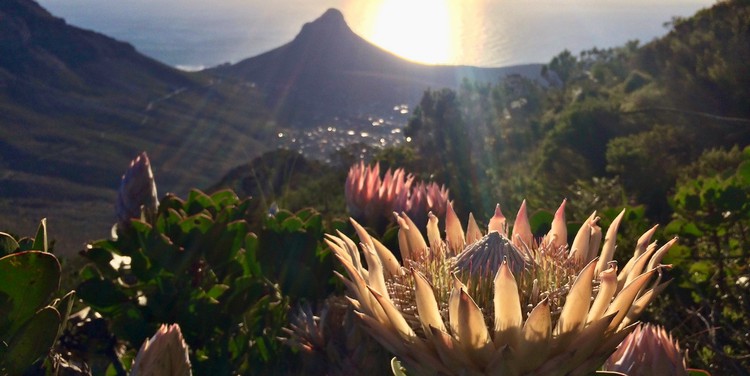 The fynbos region has seen the second most plant extinctions in the world.
Image: GroundUp/Jasper Slingsby

In the mountains, valleys and plains of the Cape, there are about 6,000 species of plants that are not found anywhere else in the world. But as the climate changes and invasive species and human development elbow them out of their natural niches, they are rapidly disappearing.

It has been 70 years since Erica turgida, with its willowy thin branches and small cup-like pink flowers, was last seen in the wild - even though it was once common around Kenilworth in Cape Town. And this little plant is one of many. Almost 40 plants in the Western Cape have gone extinct since 1900. This is about 500 times higher than the background extinction rate, which is the natural rate at which plants become extinct.

According to a Nature study published last year, the region saw the second worst number of plant extinctions after Hawaii. In response to the paper, South African National Biodiversity Institute scientist Tony Rabelo said: “The Cape Flora has a very high density of species that occur nowhere else on Earth, so any impacts in the area have a very disproportionate impact on species.”

Now, a team of researchers from the South African Environmental Observation Network (SAEON) have developed a method of catching problems in the fynbos before they irreparably damage an area.

With the seasonal fires that sweep through the Cape, its fynbos vegetation is always in a state of recovery. This makes it difficult to tell whether the plants and biome are healthy. Researchers from the SAEON have won a grant that will allow them to monitor the region’s fynbos in real-time.

In forests, it is relatively easy to tell whether there are changes and whether the trees are healthy; they are either green or they are not, says Jasper Slingsby, a SAEON biodiversity scientist and part of the project. However, with fynbos “we are working with an open system. There are fires, it is not always green, and the seasonal variability is huge,” he says.

“To say, ‘This is normal and this isn’t’ is very difficult.”

At the same time, the Cape floristic region is under increasing threat. The region is one of the world’s six floral kingdoms, with many unique plants. However, the drought, invasive species, and urban development are putting increasing pressure on this fragile ecosystem.

However, the SAEON team’s model predicts what the fynbos should look like at any given time, and using Google Earth Engine, they can evaluate whether what is on the ground is within the natural range, says Slingsby.

The two-year grant, awarded by Google Earth Engine (GEE) and the international Group on Earth Observation, will allow the team to use the GEE platform to develop their system. 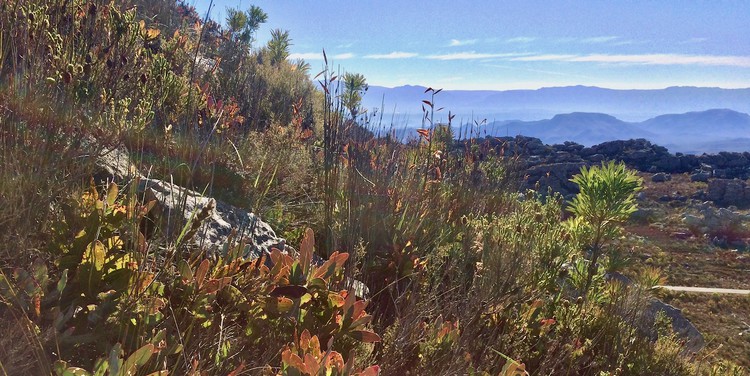 The fynbos region is one of the world’s six floral kingdoms and it is under threat from human habitation, climate change and invasive species.
Image: GroundUp/Jasper Slingsby.

In 2017, the team won a UN conservation award for their tool called EMMA (Ecosystem Monitoring for Management Application), which allows landowners and conservation authorities to map the location of unhealthy vegetation and confirm it via a smartphone app; it is one of the tools that their system will allow them to implement.

“[GEE is] a cloud computing platform that processes major remote-sensing data sets from satellites,” he says. “It allows you to run insane analyses; the scale of it is mind-boggling.”

But the real innovation is in the model that powers their analyses. In a recently published paper, the researchers – which include Slingsby, SAEON data scientist and grant lead Glenn Moncrieff, and Adam Wilson from the University of Buffalo in the US – laid out the nitty-gritty of how to compare satellite data of the Cape’s fynbos with the predictions of what it should look like.

“Tools to aid the management of open ecosystems are desperately required as they dominate much of the globe and harbour substantial biodiversity and carbon,” they write.

Slingsby and colleagues’ monitoring tool will allow them to have a bird’s-eye view of the fynbos biome. “For example, the Cederberg is a large area and you don’t know the impacts of the drought or the spread of alien invasive species. This [monitoring system] gives us an idea of what’s going on out there, especially in hard-to-reach areas,” Slingsby says.

The tool will be especially useful for conservation authorities, academics and government, he says, and the team is consulting with them so that they can respond to what these groups need. For example, the post-fire predictions can be linked to the biomass or carbon in the ecosystem, which are important for the country’s international carbon reporting obligations. 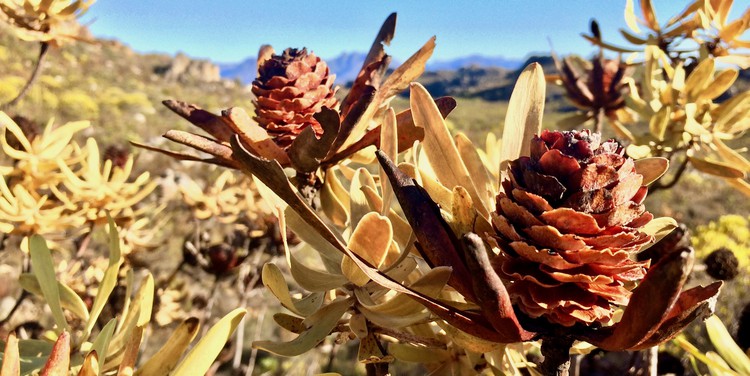 The mountains, valleys and plains of the Cape are home to thousands of species of plants that are not found anywhere else in the world.
Image: GroundUp/Jasper Slingsby

Systems ecologist Bob Scholes says this is the direction in which ecosystem monitoring is moving. “‘Big data’ means that you no longer have to design sparse sampling approaches, you can just measure everything all the time,” says Scholes, who is with the Global Change Institute at Wits University.

Several such systems already exist, he says. “We monitor fire and land-use change on a continuous basis, for instance, and here at the [Global Change Institute] we have a grassland productivity system.”

For data scientist Moncrieff, it is important that the project also has a tool that allows the public to be involved in protecting the country’s fynbos heritage.

“If the vegetation looks unhealthy, we want a citizen science application where people can go and validate that.”

But while their current focus is implementing this platform, they are already looking to other biomes in South Africa, such as the thicket in the Eastern Cape, invasive plants in grasslands, and the Lowland Renosterveld.

“We have to have a different model of what we expect natural vegetation to look like,” Moncrieff explains. “Every system has a different ecology and each [model] has to be developed separately.”

This three-day, 26km slackpacking trail wanders through a wonderland of flora and fauna with ample space for social distancing
Lifestyle
1 year ago