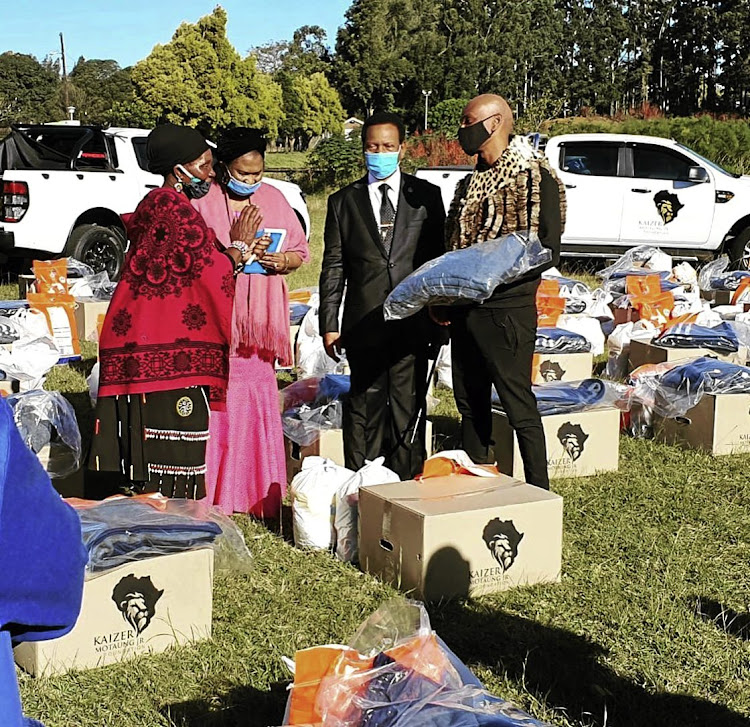 'This shame will haunt us for generations': Zakes Mda on corruption

Covid toes: a new virus symptom to look out for

Gauteng and KwaZulu-Natal headlined the latest increase in new Covid-19 cases, accounting for 60% of the 7,235 total new infections.

SA has 459,761 confirmed cases of the coronavirus as of Tuesday night, according to health ministry figures. Of the new infections, 2,265 were recorded in Gauteng and 2,119 in KZN.

Gauteng and KZN account for 60% of new Covid-19 infections as SA...

The Helen Suzman Foundation (HSF) has accused President Cyril Ramaphosa and his cabinet of failing to execute their duties.

The accusation is contained in papers filed before the high court in Johannesburg on Tuesday, with the foundation also stating that the president and his cabinet suffered from a misunderstanding of the Disaster Management Act and its intentions.

As part of the latest court battle against the government's Covid-19 laws, the foundation wants parliament and the executive to take back what it described as “staggering powers” given to co-operative governance and traditional affairs (Cogta) minister Nkosazana Dlamini-Zuma amid the coronavirus disaster.

Twitter said on Tuesday it had withdrawn a video retweeted by President Donald Trump in which doctors made allegedly false claims about the coronavirus pandemic, after Facebook took similar action.

“Tweets with the video are in violation of our Covid-19 misinformation policy,” a Twitter spokesperson said, declining to give details on how many people had watched the video.

The video was also removed by Facebook on Monday evening, said a company spokesperson, explaining that the footage shared “false information about cures and treatments for Covid-19.”

Alcohol distributors, together with other businesses affected by SA's booze ban, want the Medical Research Council (SAMRC) report which supported the ban reviewed.

The distributors, under the banner of the Alcohol Coalition, have started the #SaveMyLivelihood campaign, which was launched on Tuesday.

“The coalition members have commissioned an independent methodological and statistical review of the SAMRC report which informed the banning of alcohol sales in South Africa,” said the coalition.

So says Meg Fargher, of Budmarsh Country Lodge, in response to the news that Santam would pay “interim relief” to its qualifying business-interruption clients while it awaits a court decision on whether its rejection of claims related to Covid-19 claims is legally justifiable.

Four weeks ago, at a virtual press conference hosted by loss-adjustment firm Insurance Claims Africa (ICA) and the Tourism Business Council, an emotional Fargher told how the Magaliesburg-based lodge she and her husband Ken established couldn’t survive for much longer.

The foundation said it believed that the Disaster Management Act, which put power that should belong to the executive and parliament into the hands of co-operative governance & traditional affairs minister Nkosazana Dlamini-Zuma, was meant to have only been a temporary measure.

Another legal challenge over government's Covid-19 laws as Helen...

Cosas threatens to shut down all private schools: what you need to know

The Congress of SA Students (Cosas) has threatened to shut down all private schools in the country that remain open during the four-week Covid-19 break for public schools.

The group argued that having them open while public schools are closed is not fair.

Cosas threatens to shut down all private schools: what you need to...

Finance minister Tito Mboweni and National Treasury officials are to be called before parliament’s two finance committees next week to brief MPs on the government's procurement of personal protective equipment (PPE), which has been plagued by allegations of corruption.

There have been reports of inflated prices being paid by provincial governments as well as contracts being given to the well connected. This has been in relation to the procurement of PPE and the distribution of food parcels, reports BusinessLIVE.

The government has made a commitment to the International Monetary Fund (IMF) to be transparent in the spending of Covid-19 relief funds when applying for a $4.3bn (R70bn) loan, which was approved by the IMF executive board on Monday.

The Covid-19 pandemic has not left the Legal Aid Board SA, which provides legal assistance to the indigent, unscathed.

The provider of legal services to more than 700,000 people a year has recorded 72 Covid-19 cases, 49 recoveries and two deaths.

The pandemic has seen 39 closures at 22 offices since Legal Aid SA reopened when lockdown restrictions were eased on May 6.

Isolation together was heavenly, says couple married for 35 years

An elderly couple who recovered from Covid-19 said spending isolation together was like a second honeymoon, even after 35 years of marriage.

Western Cape premier Alan Winde used social media on Tuesday to share the story of Jacob and Valerie Bruiners, who are back home in Cape Town after several days in an isolation facility.

Jacob, 67, told Winde: “The place is wheelchair-friendly, the staff are helpful and caring and the love I have for my wife grew even stronger. We bonded with each other and the place was peaceful.

Isolation together was heavenly, says couple married for 35 years

Five teacher unions met basic education director-general Mathanzima Mweli on Monday night to find out when minister Angie Motshekga will reveal details about the management of the rest of the academic year.

When President Cyril Ramaphosa announced last Thursday that pupils will take a four-week break from July 27 to August 24, with the exception of matrics and grade 7s, he indicated that Motshekga would provide details. Matrics were given a one-week break and grade 7s two weeks.

Basic education department spokesperson Elijah Mhlanga told TimesLIVE on Tuesday that they were in the process of “looking into the implications of the president’s announcement”.

He said a task team, approved by the cabinet recently, would look at the school calendar, the provision of basic services to schools, the revised directions, school nutrition and the phasing in of pupils.

According to close sources, members of the task team are expected to include education MECs and teacher union representatives.

A new review published in BMJ Analysis has found that despite some concerns, wearing a face mask to prevent the spread of Covid-19 does not give people a false sense of security and lead them to forget about other good hygiene behaviours such as washing hands and maintaining social distancing.

Early on in the pandemic, the World Health Organisation (WHO) warned that wearing a face mask could "create a false sense of security that can lead to neglecting other essential measures such as hand hygiene practices". To test whether face coverings do indeed lead to people feeling more relaxed and reducing other positive behaviours, an effect known as "risk compensation", researchers at the University of Cambridge and King's College London, UK, decided to look at the existing evidence.

As the Covid-19 pandemic continues to ravage the country, Netflix has pledged more than R8.3m to assist artists, creatives and workers in the SA entertainment industry.

It was announced on Tuesday that the donation will form part of a Covid-19 film and TV relief fund, in partnership with the SA Screen Federation (SASFED) and Independent Producers Organisation (IPO).

The fund will provide a one-time grant of R15,000 to those hardest hit in SA’s creative community, including electricians, carpenters, hair and make-up artists, drivers, costume designers and freelancers, who are paid hourly wages and work on a project-to-project basis.

Musician Lady Zamar has expressed her heartbreak over how Covid-19 has affected Mzansi, and how the actions of corrupt government officials have made the situation worse.

Lady Zamar took to Twitter to wonder out loud if the people who steal funds meant to help citizens survive the pandemic and the lockdown understood the effects of their actions.

"Sometimes you wonder if people who steal funds meant for impoverished and disadvantaged people understand that by their actions, they’re pointing a loaded gun at the people who need those funds."

Eighty SA entertainers collaborated to recreate the classic song Lean on me by Bill Withers to spread love and hope amid the Covid-19 pandemic and lockdown.

Singer and songwriter Emo Adams partnered with pharmaceutical company Cipla to get the artists on board. Among the stars featured in the new rendition are 2017 Idols winner Paxton Fielies, Expresso presenter Zoe Brown, Bryan Habana and Siv Ngesi.

WATCH | SA stars recreate 'Lean on me' to spread hope amid the Covid...

Georgia's governor, Atlanta's mayor to square off in court on mask wearing

A Georgia judge is scheduled on Tuesday to hear arguments in an emergency motion brought by Governor Brian Kemp to stop the city of Atlanta from enforcing a mandate that people wear masks in public to help slow the spread of coronavirus.

But in a late night legal move, the hearing that was set for 10 a.m. (1400 GMT) Tuesday was moved to 2 p.m. so the two parties can attempt binding mediation starting at 8:30 a.m., according to a filing in Fulton County Superior Court.

Georgia's governor, Atlanta's mayor to square off in court on mask...

The drive-in event, called 'Safe & Sound', had space for about 600 cars and was held in Southampton, New York on Saturday. It was the first in a series of such concerts planned for the United States, according to its organiser's website.

New York concert to be investigated over 'egregious' social...

Nigeria will allow schools to reopen for pupils due to take graduation exams, a presidential aide said on Monday, reviving a plan dropped earlier this month due to rising cases of Covid-19.

Nigeria to allow would-be graduates back to school despite spreading...

Thirsty throats were soothed on Monday when locals stole beer after a Castle Lite truck lost its load on the Mabopane highway in Gauteng.

Videos of people rejoicing after the incident were shared on social media by various users.

In some of the videos, police officials can be seen on sight as motorists and nearby residents rush to grab beers, despite the ban on alcohol during lockdown level 3.

Double the trauma and tragedy. That is how families describe the horrors of mixed up or lost corpses.

The trend of undertakers mixing up dead bodies is on the uptick as strain on the sector increases with the steep rise in Covid-19 deaths.

In the past two weeks, at least three families in the Buffalo City metro in the Eastern Cape have suffered a parlour or mortuary losing their loved one’s corpse or found themselves burying the wrong body.

Lost or mixed up corpses double the trauma for grieving East London...

The Institute of Race Relations has welcomed an unambiguous message by the International Monetary Fund in favour of “growth-enhancing structural reforms” in SA.

This followed IMF approval of a R70.6bn ($4.3bn) emergency loan to address the Covid-19 pandemic on Monday.

The think-tank said the IMF made clear in its statement on Monday what it expected of the South African government.

Employers opt for salary cuts rather than job losses: survey

When given the choice, most employers who have had to make tough financial decisions amid the coronavirus pandemic have chosen pay cuts over retrenchments.

This is according to a survey by remuneration and HR consultancy 21st Century.

“Where there is financial pressure and crisis management, a large percentage of respondents said they were reducing pay as a preferred choice to avoid retrenchments. There has also been a marked escalation in increase freezes, compared to previous years,” it said.

The company said these findings were based on a series of studies it conducted, aimed at understanding changes in the workplace since the start of the outbreak.

Employers opt for salary cuts rather than job losses: survey