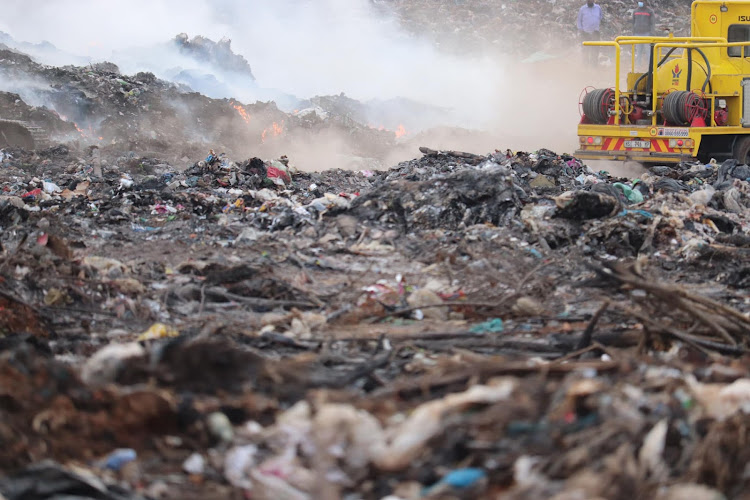 The municipality says it is considering moving the dump to another site but in the meantime wants to increase its efforts at reducing, reusing and recycling waste.
Image: supplied

A fire that raged for a week at a landfill site in Pietermaritzburg was extinguished on Tuesday.

Fire fighters had battled the blaze “day and night” since July 21, while a thick cloud of smoke hung over KwaZulu-Natal's capital city. The cause of the fire has not yet been established, however a case of arson is being investigated by police.

Waste pickers, who were removed from the site last Tuesday, allegedly started a fire on the outer lying areas of the landfill site.

“Management and security are monitoring and defusing the situation," said municipal spokesperson Thobeka Mafumbatha. He said the municipality understood that  waste pickers made their living by being on site daily but they would not be allowed on site while the authorities were working towards a solution.

He said the municipality was looking into establishing a new landfill site but it may not happen soon as "it requires a great deal of funds and resources”.

“The biggest goal at the moment is waste minimisation and diversion as the National Environmental Waste Act is clear that disposal is the last resort in terms of the hierarchy, so we need to start reducing, reusing and recycling waste,” said Mafumbatha.

The N3 outside Pietermaritzburg was forced to close during peak hour traffic on Friday morning due to the density of smoke from the city's landfill ...
News
1 year ago

Residents 'choking' as thick cloud of smoke hangs over Pietermaritzburg

Pietermaritzburg residents were forced to stay indoors for yet another day on Thursday as a thick cloud of smoke continued to hang over the ...
News
1 year ago