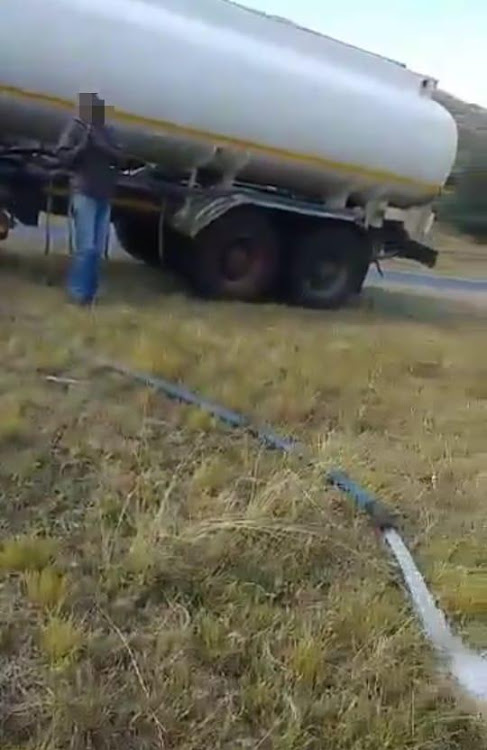 An investigation has been launched after video emerged of a tanker apparently dumping water in drought-hit KZN.
Image: Screengrab

Officials in KwaZulu-Natal want a full investigation after a water tanker seemingly dumped its load in a drought-ravaged part of the province.

The video, which has been circulating on social media, shows water running out of the tankers pipe and onto the nearby grass. Two men confront the driver of the truck, who alleges that the truck had broken down and that he had called another truck.

“If the truck is broken, why are you emptying out the water? We are going to expose you. We hate this system of the ANC and IFP. We are going to show you. You want to say you supplied it [the water]," says one of the men in a fit of rage.

The incident is said to have taken place in the uPhongolo area, which falls under the Zululand district that has been adversely affected by a drought.

WATCH: Cogta KZN has called for an investigation after a water tanker was emptied on the side of the road in oPongolo. The Zululand district is currently facing water issues because of a drought @TimesLIVE@yasantha(Vid supplied) pic.twitter.com/p7cUdBzTCj

The MEC said he was expecting a detailed report on the incident by the district municipality, as well as action by the Water Services Authority should any wrongdoing emerge from the investigation.

KZN health to get lion's share of Covid-19 response budget

The KwaZulu-Natal department of health needs an additional R3.2bn for more ICU staff, doctors, nurses and tracing teams in its response to Covid-19
Politics
1 year ago

SA farmers rap repeal of state of disaster for drought

South Africa, one of the 30 most water-scarce countries in the world, has revoked its classification of drought as a national disaster, drawing ...
News
1 year ago

A long-haul trucker was on his way home to his wife when his vehicle got a puncture and he was forced to pull over at the side of the road near ...
News
1 year ago