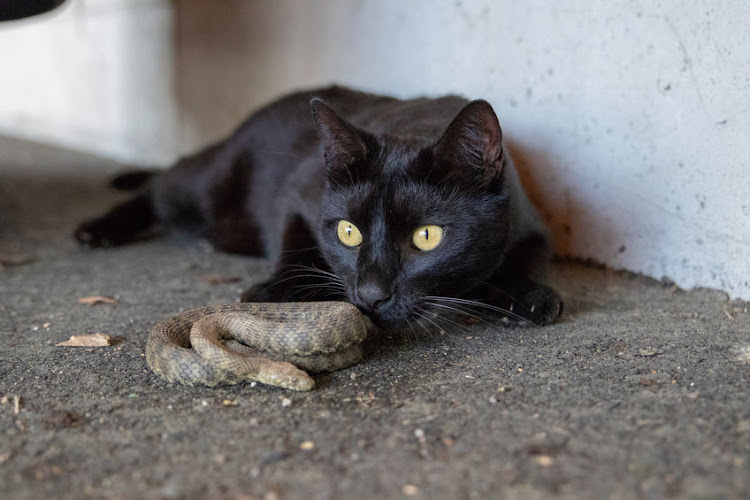 Half the animals caught by domestic cats on Table Mountain are reptiles.
Image: 123RF/Maximilian Pawlikowsky

Their prey includes threatened or endemic species, including Western Leopard Toads, Cape rain frogs, and orange-breasted sunbirds. The marbled leaf-toed gecko, which is common, caught easily and usually eaten on the spot, seemed to be a favourite target.

For the first time in Africa, the hunting habits of domestic cats within 150m of the park have been caught on cat-borne video cameras by UCT researchers in collaboration with the SA National Biodiversity Institute (Sanbi).

The footage reveals the cuddly pets kill about five times more animals than they bring home.

Cape Town has about 300,000 domestic cats which are likely to kill about 27.5 million animals a year — on average 90 per cat — despite being fed by owners.

Previous cat predation studies, based on the kills returned home, underestimated the hunting instincts of cats and the effect on the natural environment, the new research finds.

Only about 18% of all kills were dragged home. More than half the prey returned home were mammals, but they were only about a quarter of the prey.

Reptiles were half the prey but made up only 17% of the trophies cats brought inside, usually after dark.

Cats living on the edge of the park devoured different species to those in “deep urban environments”, but even city cats caught relatively few “pest” species like house mice and European starlings).

Pest species were 17% of their prey, compared to 6% of the prey of their urban edge counterparts. 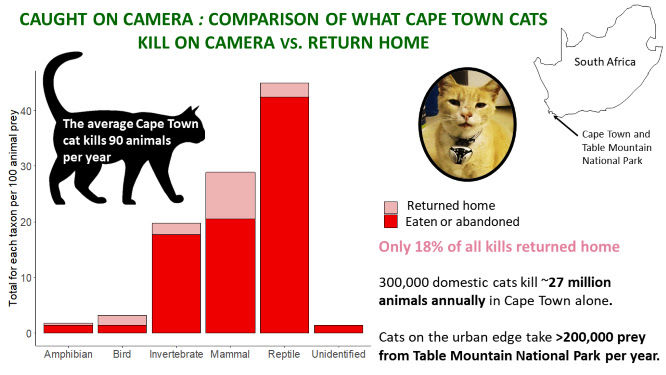 UCT ornithologist and ecologist Dr Rob Simmons, co-author of the study, said the toll on indigenous species was “a high price for controlling a few pest species”.

“We need to ensure we are able to create a balance so we do not lose any wildlife species  in the Cape to cat predation.”

Researchers recommended steps to reduce the harm to wildlife, including:

“By working with cat owners we can find solutions that benefit both the cats and wildlife areas,” said co-author and Sanbi ecologist Dr Colleen Seymour.

National authorities are obligated by international wildlife law to follow policies “to prevent, reduce or eliminate impacts of free-ranging domestic cats on biodiversity”.

UCT's FitzPatrick Institute and department of Biological Sciences, the Institute for Communities and Wildlife in Africa, Sanbi and the Kirstenbosch Research Centre collaborated on the study, published this week in the journal Global Ecology and Conservation.

The research team thanked cat owners for volunteering their pets, completing questionnaires, and for the vital role they played in recharging kitty cams day and night, downloading data and collecting prey.

A female impala found itself trapped between a rock and hard place when it unknowingly walked into a trap set by three cheetahs.
Lifestyle
1 year ago