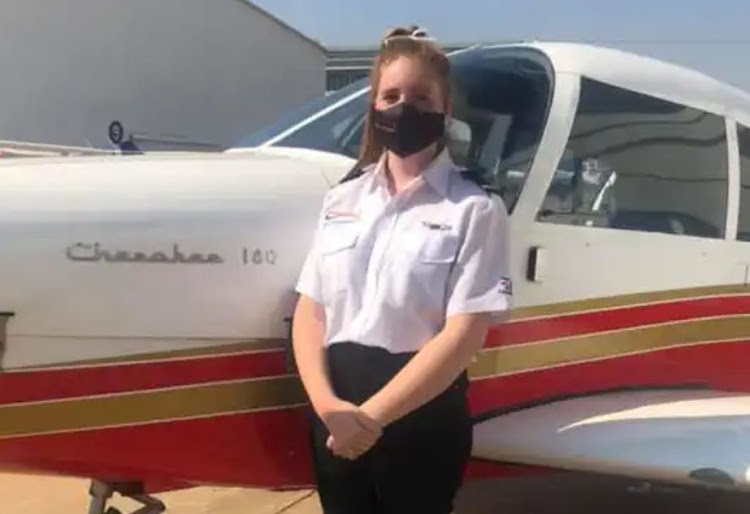 Anika de Beer with the plane she was piloting when it crashed at Wonderboom Aerodrome, Pretoria.
Image: Facebook/Professional Flight Centre

The preliminary incident report into a plane crash that claimed the life of a 16-year-old pilot says she lost control while turning too sharply.

The Civil Aviation Authority report found there was nothing wrong with Anika de Beer’s single-engine Piper Cherokee, which she flew on her second solo flight on June 30 at Wonderboom Aerodrome in Pretoria.

Instead, considering eyewitness accounts and evidence from the crash site, investigators  said the aircraft was in a steep turn before it stalled, went into a spin and crashed.

“This indicated that there was a likelihood that the aircraft may have exceeded its turn and bank limits, resulting in one of the wings losing lift before stalling and entering a spin, which the pilot could not recover from, resulting in the aircraft hitting the ground,” read the report.

It said De Beer was trying to complete a three-circuit pattern run as part of her solo-consolidation training.

The Civil Aviation Authority is investigating the aircraft accident in Pretoria on Tuesday that claimed the life of Anika de Beer.
News
2 years ago

De Beer, a grade 11 pupil at Montana High School in Pretoria, had clocked up 24 hours on the plane before the flight and was declared ready for the solo flight by her instructor, who was monitoring her from the ground.

The three-circuit flight was supposed to include two “touch-and-go” landings before she made her final landing. The accident happened during the second circuit.

The crash site showed that the left wing struck the ground shortly before the propeller cut three deep grooves into the earth. The plane came to a standstill about 100m from the first impact.

Damage to the cockpit indicated that De Beer would have sustained fatal injuries upon impact. The wreckage caught fire and set alight a farm field behind the University of Pretoria’s Onderstepoort veterinary sciences campus.

The day after Anika's death, her school issued a statement on its Facebook page saying she had completed her first solo flight a few days earlier, fulfilling one of her dreams.

“Our deepest sympathy to Anika’s parents, family, friends and everyone who loved her. We say of you in our prayers. May you experience God’s presence and solace in this time,” read the post.

Four dead after dagga-laden car crashes into bakkie on freeway

Four people died in a horrific crash after their vehicles, one which was laden with cannabis and cigarettes, collided on the N2 in KwaZulu-Natal on ...
News
2 years ago