The cracks in the ANC are widening, plus 5 highlights from 'Vrye Weekblad' 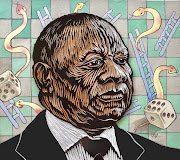 Image: JEFF RANKIN Cyril Ramaphosa has not been able to unite and reform a fractured ANC.

There are huge cracks in the ANC's dam wall. They are now too wide for mere fingers to plug them and the wall is bound to break. The Covid-19 pandemic might just be the ANC's Waterloo.

Cyril Ramaphosa rescued the party from a possible hammering at the ballot box last year. He was the antithesis of Jacob Zuma and millions of South Africans were hoping that the governing party would be able to heal and save the country.

It is now very clear that that didn't happen, and it isn't going to happen. The question is: was it even possible to reform the ANC, or should Ramaphosa and his faction take all the blame?

The Guptas have left the country and we have now been spared the images of a president who is just too happy to be of service to state capturers. A handful of corrupt officials have been removed from their positions.

But if we didn't realise it before Covid, we are realising it now: The ANC is today as corrupt as it was under Zuma, it is just a little more subtle.

Read more about our politics, our battle against Covid-19, and more news and analysis in this week's edition of Afrikaans digital weekly Vrye Weekblad.

Covid-19 was the great disrupter. Everything is fluid right now.

The ANC's greatest shock might not come in next year's local government election, even though the party might lose more support. The 2023 general election might be the moment the ANC gets less than 50% support.

The problem is that the DA is moving backwards and has again turned himself into a party for minorities.

The EFF also seems to have stopped growing, and the possible criminal trials of its top leaders will cause further harm.

Now is the time for the wide-ranging restructuring of political power in SA.

IMTIAZ THE GIVER | Gift of the Givers is everywhere where people are in need. The organisation is, as it always tends to, leading the fight against Covid-19. We speak to the charismatic Dr Imtiaz Sooliman, who got the whole thing started.

NATHI SWEATS ENOUGH TO FILL A FIRE POOL | Former police minister Nathi Nhleko had a lot of explaining to do this week, and not only about his role as Jacob Zuma's chief defender in the Nkandla saga.

RADICAL EDUCATION TRANSFORMATION | Secondary and tertiary education is in dire need of radical transformation. Not of the type that would make a cadre happy, but something that would make the education system more accessible, deliver a better product to the job market and would be cheaper.

FREE TO READ — #BOEKBEDONNERD | This isn't a book review. It is an ode to the written word. A compilation of ideas and suggestions of classics works and new ones, of text and music. Of words that moved us.

FREE TO READ — HOW GREEN IS YOUR BRAAI WOOD | Whether you are braaiing or warming up by the fire place, do you know what wood would be best? Not just for your meat or your cold feet, but for the environment too? We give you a few options that work for both.