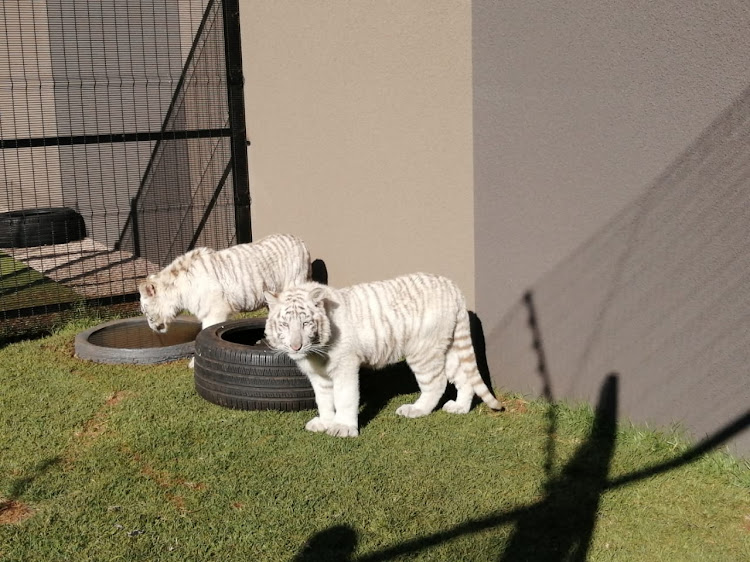 A Johannesburg homeowner is in hot water with the SPCA after it was discovered that two white tiger cubs were being kept on the property.
Image: Sandton SPCA

A homeowner in Houghton, Johannesburg, has drawn the ire of the SPCA after it was discovered that two white tiger cubs were being kept as pets in the leafy suburb.

According to a statement from the Sandton branch of the animal welfare organisation, inspectors were lobbying to have the cubs moved to a secure sanctuary.

“Inspectors were made aware of a property in Houghton where tiger cubs were being kept on the premises in an enclosed area … These young predators appeared to be in fairly good physical condition, but the enclosure did not have filled water bowls and the environment lacked enrichment,” the statement reads.

“Our inspectors requested that the cubs be surrendered to an approved sanctuary, where they can live in an environment as close as possible to their natural habitat with minimal human intervention.

“The owners were advised that tiger cubs are not domesticated animals and should not be kept as companion animals nor in captivity.”

After inspectors warned the owner, he built a water container into the ground so it cannot be tipped over and installed a range of enrichment equipment, including a jungle gym.

“The SPCA is opposed to wild animals being kept in captivity and are working with the environmental health department to ensure that these animals are released to a suitable environment where all their needs can be catered for,” said the NSPCA.

“We will continue to work on this case until the cubs’ release to an approved sanctuary.”

The National Society for the Prevention of Cruelty to Animals (NSPCA) has condemned the actions of a wildlife park owner who was filmed allegedly ...
News
2 years ago

Seven lions which escaped through a gate - allegedly damaged by saboteurs - have been darted and recaptured.
News
2 years ago