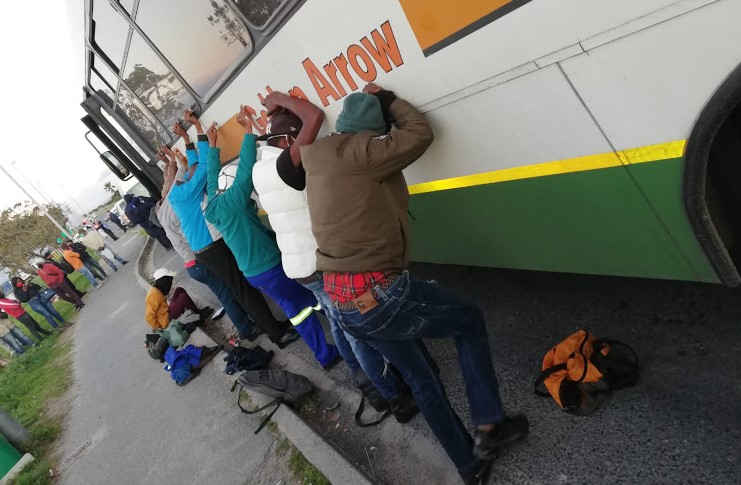 Suspects were identified by their victims from previous robberies.
Image: City of Cape Town

Two alleged robbers who have been targeting the same Cape Town bus since June finally met their match when their victims saw them again on Wednesday.

The passengers, who were taking a Golden Arrow bus home from Claremont, knew the men from the previous three times they boarded the bus and allegedly robbed its occupants. When the victims saw them on Wednesday, they got off the bus and notified Cape Town law-enforcement officials.

“At 5.20pm the law-enforcement reaction team arrived on the scene and the bus they were on was pointed out to the officers on the corner of Robert Sobukwe and Duinefontein roads,” said spokesperson Wayne Dyason. “The people who exited the bus before the officers arrived were phoned by a Golden Arrow official.”

One described a man who robbed her twice.

“One suspect on the bus was found to match her description and positively identified. Another witness identified another suspect who allegedly robbed her of her cellphone on August 4 and this description matched the other suspect,” said Dyason.

The two suspects were taken to Philippi East police station where they were arrested.

A man in Bulawayo, Zimbabwe, has appeared in court after allegedly falsely claiming he bought a bus worth more than US$31,000 (over R450,000).
News
1 year ago

The Hawks have arrested a 40-year-old man from Whittlesea, in the Eastern Cape, for aiding and abetting four dangerous suspects who escaped from ...
News
1 year ago