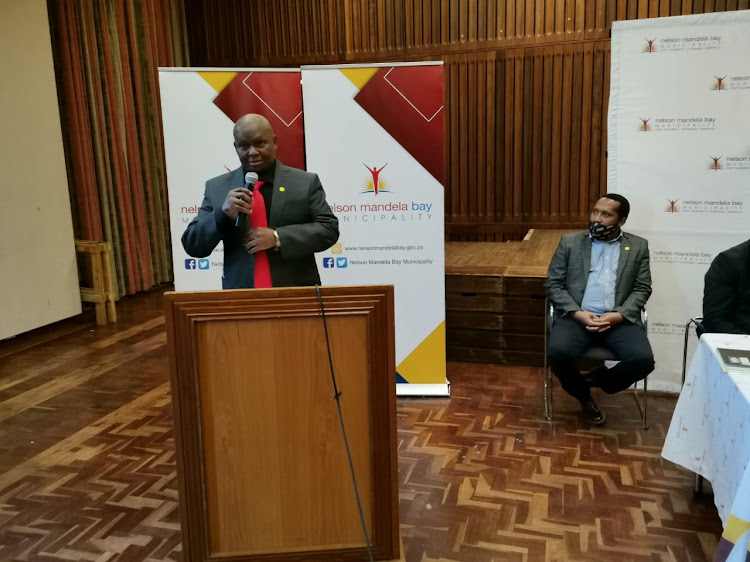 Nelson Mandela Bay’s new portfolio head for infrastructure and engineering, Mongameli Bobani, lays down the law on high water consumption during a briefing at City Hall on Thursday.
Image: SUPPLIED

We will throttle you. That’s the word from the Nelson Mandela Bay municipality to consumers who use too much water at a time when the metro’s dam levels stand at just 17.46%.

On Thursday, the metro’s newly appointed head of infrastructure and engineering, Mongameli Bobani, announced that water restrictors would be introduced for those whose consumption was too high.

Bobani, who was axed as the Bay’s mayor on December 5 after a no-confidence vote, made his mayoral committee comeback on Monday, shortly after former infrastructure and engineering boss Andile Lungisa resigned amid disciplinary action by the ANC in the province.

On Thursday, he outlined the short-term plans his department has put in place to find long-term solutions to the city’s water supply challenges, caused by low dam levels and high consumption.

Bobani admitted that the city wasted huge amounts of water through leaking pipes and other infrastructure problems but said that at least a third of those leaks had been fixed.

Earlier this week, The Herald reported that construction was under way to upgrade the Motherwell-Chelsea 500mm pipeline.

The municipality’s communication office said in a statement that a notice signed off by acting mayor Thsonono Buyeye stated that all domestic customers would have a flow meter restrictor installed to reduce water pressure as a measure to curb losses.

“Those with excessive water use, will have a flow meter restrictor installed to limit usage to 15kl a month,” Bobani said on Thursday.

“Industrial, commercial and institutions will be requested to reduce their consumption by at least 20%.”

Over the past few weeks, areas such as KwaNobuhle in Uitenhage and Lorraine, Kabega Park, Walmer and other suburbs in the western areas of the metro experienced water cuts, much of it blamed on low dam levels and infrastructure failure.

The director of water distribution, Joseph Tsatsiri, said water consumption was at 281Ml a day, while the supply was at 268Ml.

“So there is a deficit in the system.

“Over time we have managed [the] deficit through storage reservoirs but due to operational failures, we have depleted that and now it is affecting the communities, which is a manifestation of the drought as well,” Tsatsiri said.

He said the immediate but temporary solution was to continue providing tanks to the affected communities.

Municipality spokesperson Mamela Ndamase said the installation of the restrictors would begin next week, but that the process would be a gradual one as officials identified the heavy water consumers.

“We wish to state clearly that we outright reject this appointment,” he said in a statement.

The failure by Nelson Mandela Bay municipality to fix the potholes in Old Uitenhage Road between Smartie Town and Missionvale township has prompted ...
News
1 year ago