Image: Alon Skuy A digger prepares a grave for a Covid-19 victim at Wespark Cemetery in Johannesburg.

Excess deaths in SA have fallen for the second successive week, according to a report issued on Wednesday by the Medical Research Council (SAMRC).

The number of excess deaths in the week up to August 4 was 4,673 above the number predicted by historical data, said the report.

The previous week, in which the excess deaths graph headed downwards for the first time in 12 weeks, produced an estimated 5,533 extra mortalities.

“This week’s report shows hopeful signs of the epidemic reaching its peak in all the provinces by the end of July 2020,” said a council statement accompanying the report.

Council president and CEO Prof Glenda Gray added: “The downward turn of deaths is a positive sign that the virus may have peaked in some parts of the country and is in keeping with the epidemiological models of the epidemic.”

Gray urged doctors to ensure accurate completion of death certificates, especially if the death was Covid-19 related, as data was vital in understanding the true affect of the epidemic.

Collateral deaths arise as a result of the epidemic's affect on the provision of health care to patients with other conditions.

Image: Medical Research Council How numbers of reported Covid-19 deaths and SAMRC estimates of excess deaths have diverged - first during lockdown when excess deaths were a negative number, then when lockdown eased and they soared.

In the week ending August 4, there were 1,387 Covid-19 deaths, according to health department statistics. The council estimate is 3.4 times higher.

The council said total weekly deaths from all causes were 14,594, which is 47% above the predicted number.

The council has calculated excess deaths since May 6, when the number of deaths began to depart from the predicted level. 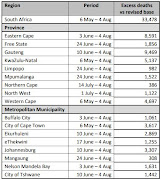 Using a method that adjusts the baseline to account for lower mortality during lockdown, the council's latest estimate is that there have been 33,478 excess deaths.

In its analysis of excess deaths in SA's metros and provinces, the council said with the exception of Mangaung, deaths from natural causes in all metros had declined during the week ending August 4.

“Trends in all provinces have plateaued or declined during the week ending August 4,” said the report. “The numbers of weekly deaths from natural causes are all significantly higher than predicted — excepting for Limpopo, which is now below the upper prediction bound.

“Compared with the predicted number of natural deaths from historical data in the week ending August 4, Free State had 118% more, Gauteng had 102% more, Eastern Cape had 96% more, KwaZulu-Natal had 69% more, Mpumalanga had 63% more, Northern Cape had 51% more, North West had 38% more, Western Cape had 37% more and Limpopo had 15% more.”

Explaining the epidemic's different provincial trajectories, Prof Debbie Bradshaw, chief specialist scientist from the council's burden of disease research unit, said: “The Western Cape, the first province to experience community spread, stands out as having a much slower epidemic.

“It took several weeks to set in and is now taking time to recede. In contrast, the epidemics in the Eastern Cape, Gauteng and KwaZulu-Natal had much quicker increases.”

The number of deaths from unnatural causes, such as road accidents and homicides, was 34% below the predicted number in the latest week analysed.

The authors of the report said one approach to understanding Covid-19 mortality was to compare their estimates with statistics issued daily by the department of health.

“If all excess natural deaths were due to Covid-19, and all Covid-19 deaths were perfectly identified and reported, the two series would be identical.

“The number of estimated excess deaths has begun to decrease, consistent with the trend in the number of confirmed Covid-19 deaths.

“Though more data are needed on the underlying causes of death, this observation is strongly supportive that a significant proportion of the current excess mortality being observed in SA is likely to be attributable to Covid-19.”

Image: Medical Research Council The P-Scores for different provinces show how deaths from natural causes have differed from the predicted levels.

The authors said the percentage change in the number of deaths from the expected number for a particular period — the so-called P-Score — was another measure often used to describe excess mortality.

“Negative values below 0% reflect a deficit in deaths, while positive values reflect an increase,” they said, adding that the graph above shows the percentage change between the estimated number of deaths from natural causes and the predicted number based on historical data.