No doctor, nurse or porter has died from Covid-19 in Limpopo while the Eastern Cape has reported the highest death rate among health-care workers 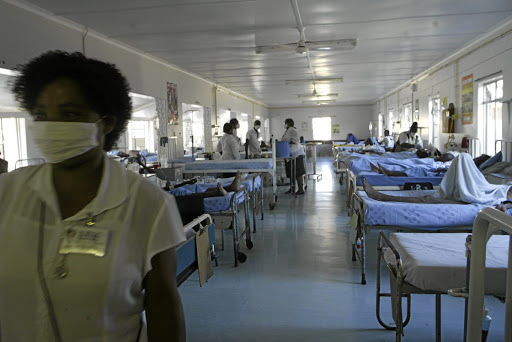 The health ministry has revealed how the coronavirus has affected hospital workers.
Image: Jackie Clausen

A total of 27,360 SA hospital workers — which include doctors, nurses, porters and other hospital staff — have contracted Covid-19 since the start of the outbreak.

Two-hundred-and-forty of them have died from the virus, the health ministry announced on Thursday.

Health minister Zweli Mkhize said data provided by the provinces had revealed that 21,333 of these infections — 78% — had been reported from employees in the public health sector.

“The overall infection rate among health-care workers as compared to the total number of cases identified nationally is 5%, which is well below the global average of 10%,” said Mkhize.

Giving a breakdown of infections, Mkhize revealed that nurses had more exposure to the virus compared to doctors and other hospital workers.

A total of 14,143 nurses had tested positive for the virus since the outbreak while 1,644 infections were reported among doctors. Twenty-eight porters had also tested positive while the remaining 11,545 infections — 42% of the total number of infections — came from other categories of those employed in the health sector. 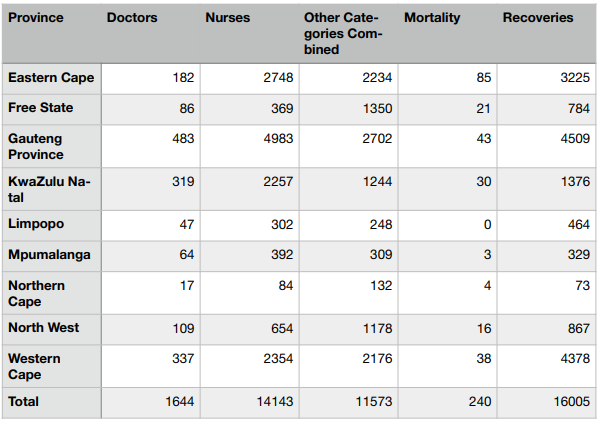 A breakdown of all the Covid-19 related infections and fatalities recorded among healthcare workers.
Image: Supplied / Health ministry

In terms of the breakdown for provinces, the figures revealed that the embattled Eastern Cape had recorded the highest number of fatalities among its health workers. The province accounted for 85 of total deaths. Gauteng recorded 43 while the Western Cape recorded 38.

Notably, Limpopo reported that it had no deaths among its health workers. The latest national statistics that were released by the health ministry on Wednesday revealed that the province has only accounted for 127 of the 11,010 nationwide Covid-related deaths since the outbreak.

'This pandemic has made us more than nurses': On the front line with Thembisa Lote

The coronavirus pandemic has proven to be a roller coaster few months for Thembisa Lote, operational manager of the Princess Clinic in Roodepoort, ...
News
1 year ago

SA's front-line nurses are suffering  psychological distress, lack confidence in their knowledge of Covid-19 and are worried about infecting their ...
News
1 year ago

A nurse in Welkom has succumbed to Covid-19, adding to the growing number of health-care workers who have died from the virus.
News
1 year ago