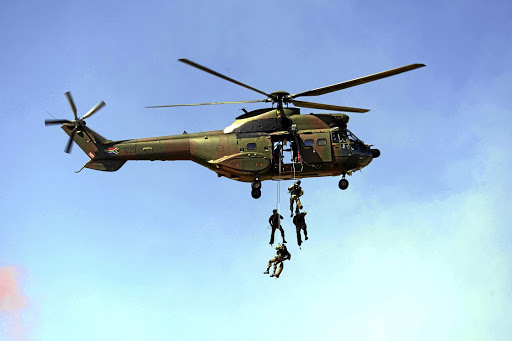 A SA Air Force Oryx helicopter was dispatched from Durban on Friday to evacuate an injured crewman from a crude oil tanker
Image: Gallo Images

An Indian crewman was airlifted from a crude oil tanker off the coast of Port Elizabeth after suffering a serious injury on Friday.

National Sea Rescue Institute (NSRI) spokesperson Craig Lambinon said a SA Airforce 15 Oryx helicopter was dispatched from the Durban air force base after 2pm on Friday with a rescue team including swimmers and paramedics.

“They were activated to evacuate a 36-year-old Indian crewman suffering a serious injury on a 330-metre crude oil tanker near Port Elizabeth,” he said.

“NSRI Port Elizabeth had been placed on alert on Friday morning with duty controllers monitoring the operation.

“On arrival at the ship offshore at Algoa Bay in calm sea conditions two rescue swimmers and a paramedic were hoisted onto the vessel with a stretcher.”

Lambinon said the crewman had suffered a compound fracture to his leg from a fall and was taken into the care of the rescue team from the ship's medical crew.

“Secured into a rescue stretcher the patient was hoisted onto a helicopter accompanied by a paramedic.

“The remaining two rescuers were hoisted off the ship and recovered into the helicopter.

“The patient was airlifted to a Port Elizabeth hospital in a serious but stable condition where he is recovering post an operation,” said Lambinon.

Two seriously injured crewmen were taken to hospital after being evacuated from a crude oil tanker anchored off the coast of Durban.
News
1 year ago

An inquest has been opened into the death of a woman, after her body was found floating in the water outside Kalk Bay harbour, Cape Town.
News
1 year ago