Trucks and car ablaze on N2 in Hluhluwe 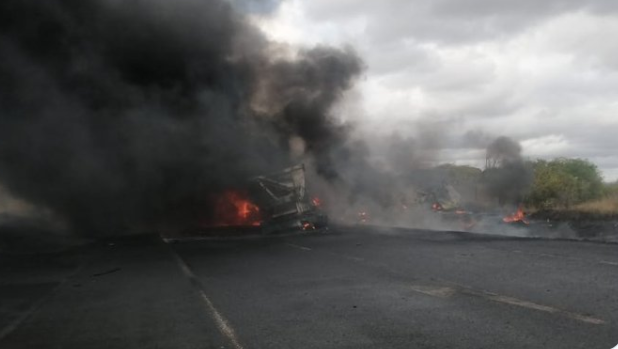 At least two trucks and a car are on fire on the N2 in Hluhluwe after a collision on Sunday.
Image: Twitter/ @KZN_EMS

Two trucks and a car are on fire on the N2 near Hluhluwe in KwaZulu-Natal after a collision on Sunday, said paramedics.

Speaking to TimesLIVE about an hour after the accident, KwaZulu-Natal EMS spokesperson Robert Mckenzie said the vehicles were still burning.

He said it was unknown how many people were involved in the crash and whether there were any survivors.

“We have instructed our paramedics to stay at least 500m away from the scene for now as it is too dangerous,” he told TimesLIVE.

Firefighters were still trying to contain the blaze which had sent large black plumes of smoke into the sky.

“The exact cause of the crash is not known at this stage,” Mckenzie added.

Motorists were advised to avoid the scene.

Four people were killed when a car hit a wall in Cape Town early on Saturday.
News
1 year ago

Two people died, one on impact, after a car collided with an empty fuel truck on Houwhoek Pass, near Grabouw, in the Western Cape over the weekend.
News
2 years ago

Viraag Hansrajh, a runner-up in last year's Mr India SA contest, was laid to rest hours after his death.
News
2 years ago