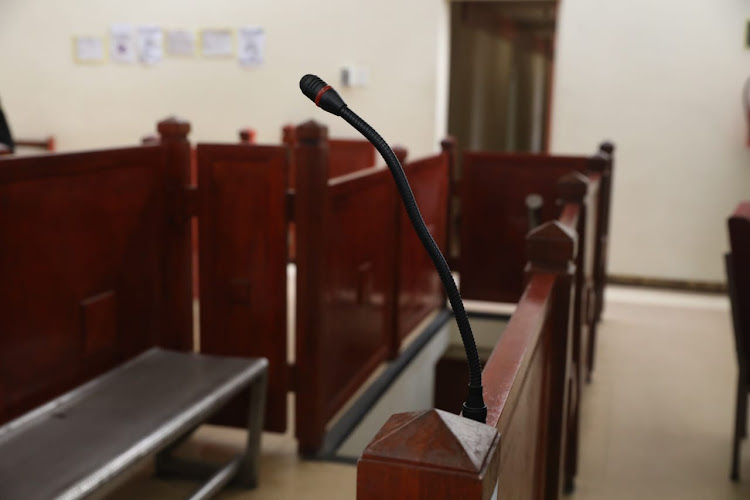 The dock at the Umzumbe magistrate's court was empty on Monday after the case against a man accused of murdering five women wasn't enrolled.
Image: Sandile Ndlovu

The dock at the Umzumbe magistrate's court was empty on Monday after the remaining suspect arrested in connection with the deaths of five women, whose bodies were found in sugar cane fields in Mtwalume, didn't appear after his case wasn't enrolled in court.

The man, who can't be identified, was one of two suspects who police minister Bheki Cele said on Saturday would appear in court in connection with the deaths of Akhona Gumede, 25, Nosipho Gumede, 16,  Neliswe Dube, 22, Zama Zama Chiliza, 38, and an unidentified woman in her twenties who died between April and last week.

The men were detained at the Hibberdene police station pending their court appearance on Monday. However one of the men was found dead on Monday in an apparent suicide.

Breaking: That matter against the remaining suspect in the #MthwalumeMurders has not been enrolled due to insufficient evidence against him. Police minister Bheki Cele is expected to address media today @TimesLIVE @yasantha pic.twitter.com/GmDuHQYziB

The second suspect was taken to court but the matter wasn't heard.

A court official said that the case wasn't enrolled because of an apparent lack of evidence.

Cele is expected to address a crowd who had gathered outside court on Monday. The gathering reacted angrily when they were informed that the accused would not be appearing in court.

The crowd is demanding to see the man who was supposed to appear in connection with #MthwalumeMurders pic.twitter.com/WHa3hiSsGc

One of two men due to appear in court on Monday morning in connection with the deaths of five women on the KwaZulu-Natal south coast has died.
News
1 year ago