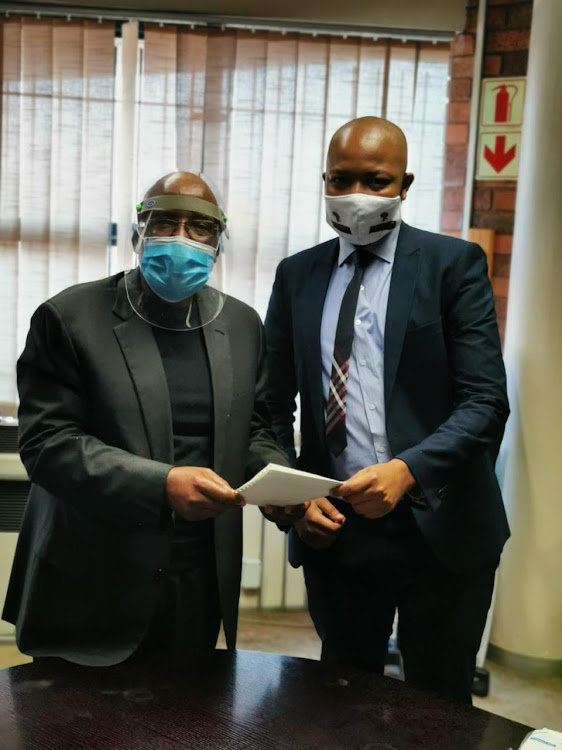 Home affairs minister Aaron Motsoaledi with lawyer Sihle Mdludla. The minister hand-delivered a birth certificate to the lawyer and the mother of a KZN girl who stood to lose out on an R8m German inheritance because the department didn't heed a court order to amend her document.
Image: Supplied

Minister of home affairs Aaron Motsoaledi personally handed over documents on Monday to the mother of an eight-year-old child from rural KwaZulu-Natal who faced losing out on an R8m foreign inheritance because department officials had, for nine months, refused to comply with a court order.

TimesLIVE highlighted the plight of the child and her mother on Friday when it revealed that they were set to go back to court this week to obtain a contempt of court order against the minister and director-general, putting them on terms to explain why they should not be jailed and fined.

Within hours, the minister’s spokesperson contacted the TimesLIVE reporter for further details and took action to ensure that the order would be complied with immediately and the relevant officials disciplined.

On Monday, the mom’s attorney Sihle Mdludla confirmed that all the necessary documents had been handed over to him and his client and that the minister had apologised.

The documents were being couriered to Germany on Tuesday and would be there in time for a court hearing to determine the inheritance issue on August 24.

Home affairs minister Aaron Motsoaledi has ordered his department to urgently comply with a November court order which would allow a minor child to ...
News
1 year ago

The child’s mother was married to German-born Unisa professor Hans Schulze who, just before his death from cancer, adopted her in a traditional ceremony.

His own mother died in Germany some months later, leaving about €400,000.

In terms of German law, a descendant may inherit even if they are not named in the will. While a local doctor was claiming the estate, the German court said it would consider the child's claim, as long as Schulze was named as her father on her birth certificate.

In spite of a court order handed down in November last year, giving home affairs three days to do this, officials at the Centurion office repeatedly refused to do so.

In his statement on Friday, the minister said the mom should never have had to approach the court in the first place.

“Laziness, treating members of the public with disdain and failure to uphold the law have no place in such a crucial department charged with the constitutional and statutory responsibility to issue documents that empower and changes the lives of people,” he said, saying the investigation into the conduct of the officials would take two weeks.

Mdludla told TimesLIVE that his client would assist with the investigation to identify those she had dealt with.

“The minister has agreed to pay the costs of our court application. We are happy that the matter is finally closed. It brought considerable strain on our client.”

He said he expected the German court to rule next week on the issue and should the child inherit, the money would be placed in a trust account.

An eight-year-old South African girl stands to lose out on an R8m life-changing overseas inheritance because the department of home affairs has ...
News
1 year ago

A Chinese man was forced to take home affairs minister Aaron Motsoaledi to court after his department refused to allow the man back into SA ahead of ...
News
1 year ago

Life on hold: Man's 12-year battle to get his identity document

For 12 years Clinton Adams, 34, hasn’t had an identity document.
News
1 year ago