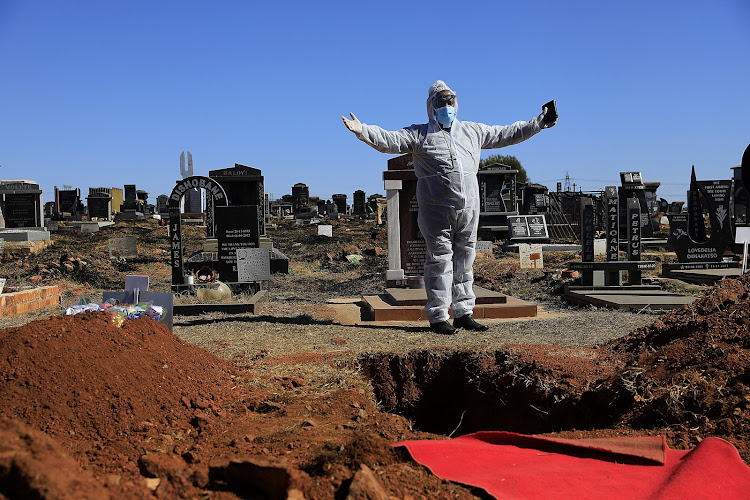 Reverend Didiza from Kagiso Methodist Church, in the Mogale Circuit, leads the funeral service of an 82-year-old woman who succumbed to Covid-19. The number of South Africans dying during the pandemic has declined for the third successive week.
Image: Alon Skuy

Excess deaths from natural causes have fallen for the third successive week, in line with the decline in confirmed Covid-19 deaths, the Medical Research Council (SAMRC) reported on Wednesday.

The number of excess deaths in the week ending August 11 was 3,014 - above the expected total based on historical trends.

In the previous week, there were 4,673 excess deaths. 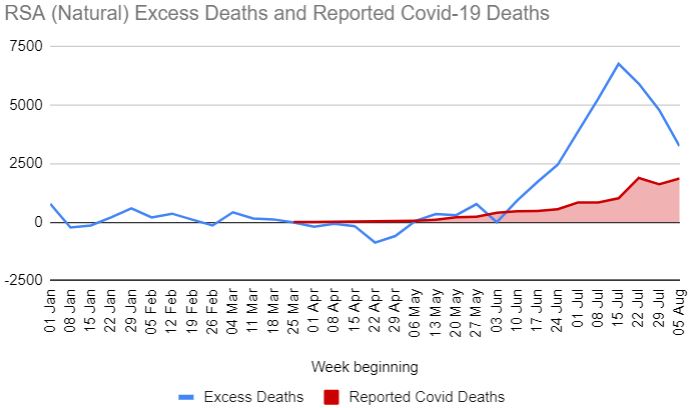 At the height of the pandemic, the number of excess deaths per week was more than four times the official Covid-19 toll.

By August 11, there had been 10,751 confirmed Covid-19 deaths, meaning the pandemic's likely toll is about 3.4 times the official figure. This is due to Covid-19 deaths being incorrectly reported and "collateral deaths", which are an indirect consequence of the epidemic. 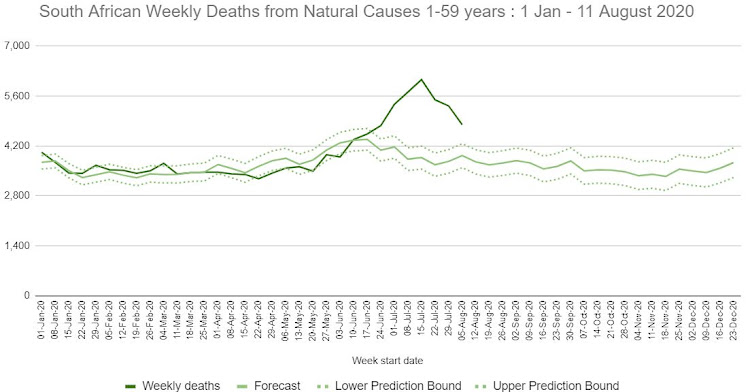 The new report confirms the council's tentative conclusion a week earlier that the progress of the Covid-19 epidemic in SA has reached a turning point.

If active cases continue to fall at the rate set in the last 14 days, they will be minimal by mid-September. 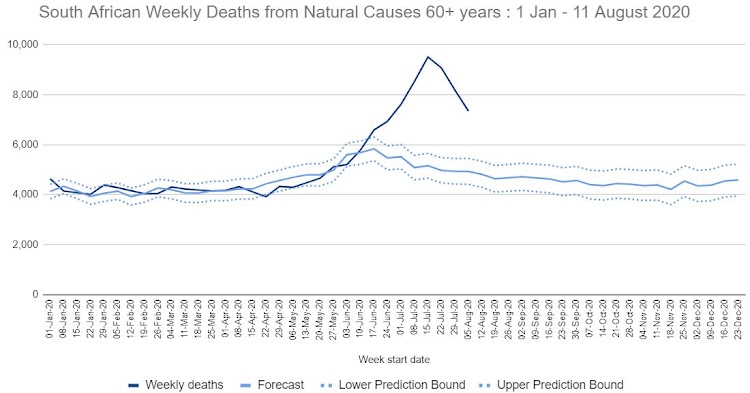 Weekly deaths among over-60s are falling close to the expected number based on historical trends.
Image: Medical Research Council

The council team that puts together the weekly reports estimates there were a total of 36,587 excess deaths between May 6 - when mortalities began to deviate sharply from the forecast - and August 11. 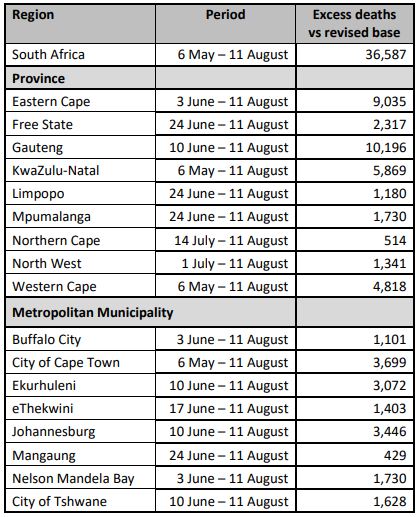 How excess deaths have hit provinces and metros since they started departing from historical predictions in different areas.
Image: Medical Research Council

"Except for Mangaung, deaths from natural causes in all the metros have declined during the week ending on August 11."

"Except for Northern Cape, trends in deaths from natural causes in all the provinces declined during the week ending on August 11," said the report.

"The number of weekly deaths from natural causes are all significantly higher than predicted, excepting for Limpopo and the Western Cape.

The number of deaths from unnatural causes, such as road accidents and homicides, remained steady and was 23% below the predicted number for the week.

Life expectancy could decrease in SA as GDP drops due to Covid-19: report

The life expectancy of South Africans is projected to decrease with every 1% decrease in gross domestic product as a result of Covid-19, according to ...
News
1 year ago

Excess deaths have risen by 5,728 in the latest weekly report by the Medical Research Council. Only 1,889 people officially died of Covid-19 in the ...
News
1 year ago